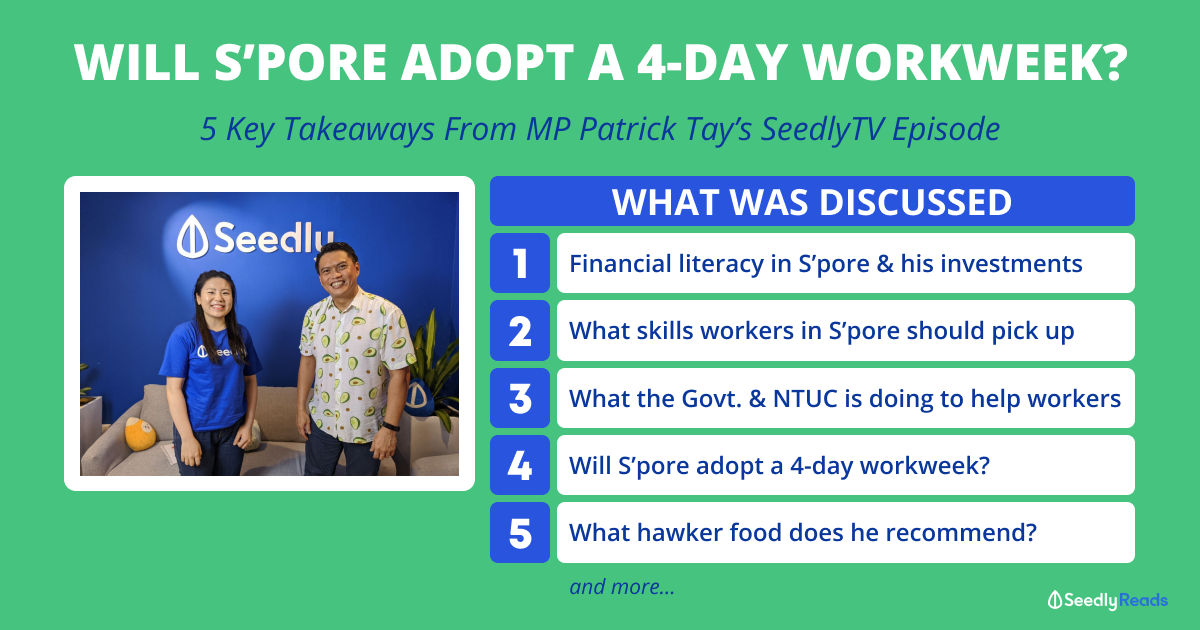 On Wednesday (13 Jul 2021), we had the privilege of having Mr Patrick Tay, the Assistant Secretary-General of the National Trades Union Congress (NTUC) and Member of Parliament (MP) of the Pioneer Single Member Constituency (SMC) as a guest on a live episode of SeedlyTV.

My colleague Clara grilled him about topics like financial literacy, the new normal in Singapore due to COVID-19, the future of work, how the Government is helping Singaporeans adapt.

Not to mention a more lighthearted segment where Clara tested Mr Tay about his knowledge of hawker food by making him guess how much dishes like Chai Tow Kway, Chicken Rice and Rojak cost.

Although the episode was a bit long (1 hour 45 minutes), the time flew by and I found myself enjoying this fun and insightful episode.

Here are five key takeaways I took from this episode! 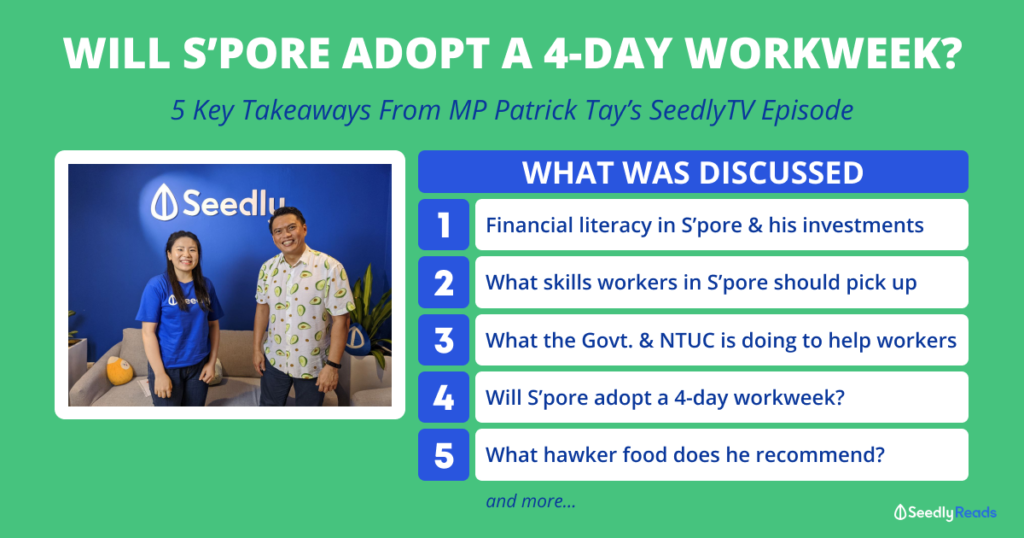 But before we start, here’s a primer on our guest.

As a trained lawyer and director of NTUC’s legal services and strategy, he represents the labour movement in tripartite workgroups to review and update employment and industrial relations legislation and has been pivotal in lobbying for the many changes to manpower related laws and policies in Singapore.

He is also the Executive Secretary for Banking and Financial Services Union (BBFSU) and the Singapore Manual & Mercantile Workers’ Union (SMMWU).

On Financial Literacy in Singapore and His Investment Portfolio

Clara and Mr Tay started off by discussing financial literacy and how it has changed in the last twenty years.

In the past, it used to be more straightforward and less complicated.

It was all about saving more than you spend, saving for a rainy day.

Mr Tay reminisced about how he was encouraged to save in schools back in the 70s with the launch of the National School Savings Campaign (NSSC) in 1969.

According to NLB, this campaign was pushed

to government and government-aided schools in 1969 to cultivate thrift in students and to encourage them to save with the Post Office Savings Bank (POSB). The campaign was also part of a domestic savings drive to have one million depositors, or one out of every two Singaporeans, place their savings in the POSB. In addition, the drive aimed to double the deposits in the bank to S$100 million. The government saw domestic savings as a source of funds for investment that would bring about greater prosperity and economic growth for Singapore.

Children were encouraged to save by buying $0.10 stamps to fill their cards with $2 worth of stamps. 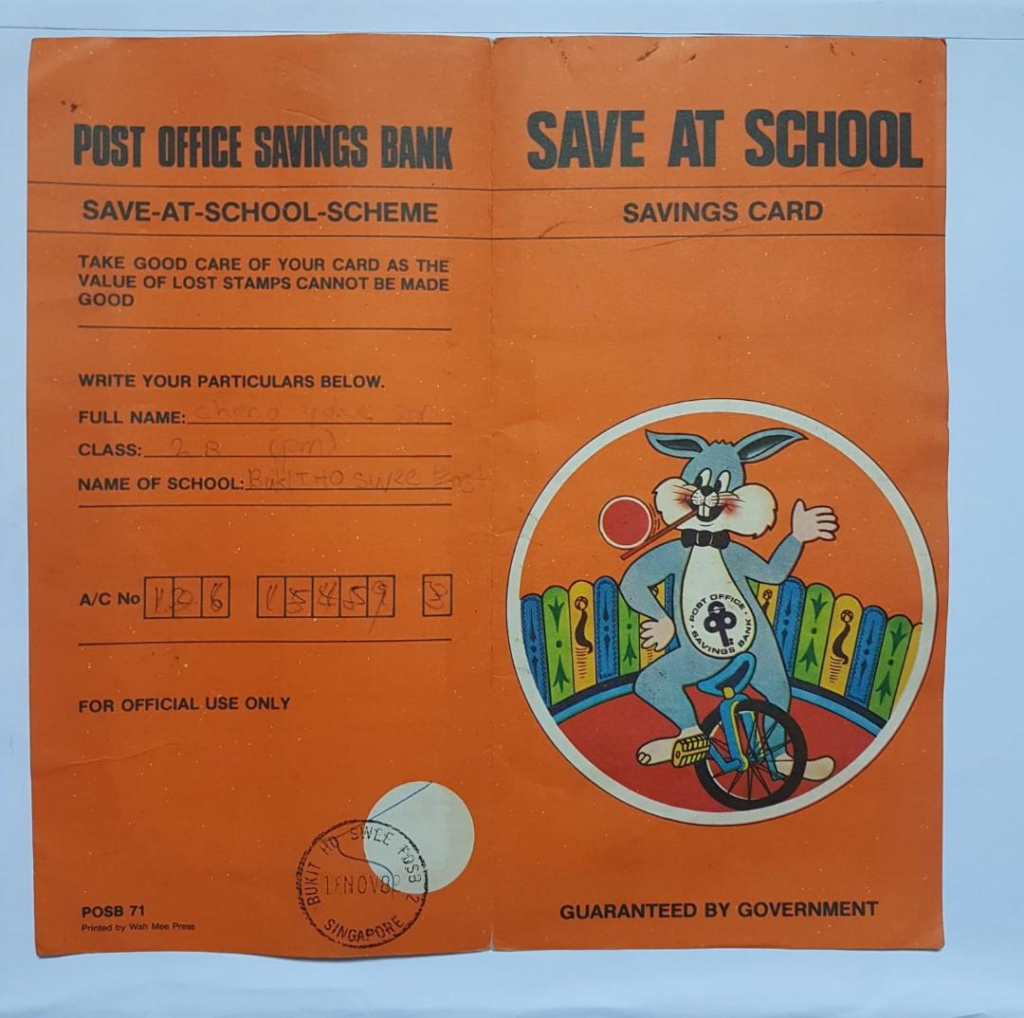 Once the card was completed, students could head to the banks to convert it to a bank deposit.

Mr Tay mentioned that it has really evolved over the years having observed it with his three kids who are in Primary, Secondary and Junior College respectively.

He mentioned that although it is not taught directly with Money 101 courses, they are being taught it through their math lessons with practical examples.

He added that his two eldest children were learning about money through taking subjects like Principles of Accounting in Secondary school and Economics in Junior College.

While our society has become more financially literate over the years, there are still quite a few challenges that the youth face.

For example, they face the challenge of being bombarded with too much information.

He added that at the ground level, the Pioneer SMC GROs have digital ambassadors who help the less digitally savvy elderly access digital financial services and are conducting free financial literacy courses for their constituents.

In addition, one of our Seedly community members asked Mr Tay about what his investment portfolio was like.

Mr Tay expressed regret that he did not start investing earlier and added that he was a more conservative investor.

He added that his portfolio was made up of four main components:

Mr Tay also talked about how he learnt about Cryptocurrencies like Ethereum at a Fintech course he did a few years ago.

He added that he was just sharing and not giving any financial advice as each person’s risk profile and financial situation is different.

Mr Tan also shared some insights about the future of work in Singapore and how COVID-19 has disrupted work and accelerated the digital transformation.

In terms of the workforce, he identified that Singapore is facing the challenge of a rapidly ageing workforce.

He added that the profile of our workforce is rapidly changing to a more educated one with the majority of workers working in professional, manager, executive and technician (PMET) roles.

This comes with its own set of challenges.

He highlighted that we need to pay more attention to digital inequality as the people who are less digitally savvy for a variety of reasons might be left behind.

What the Government Is Doing To Help Singaporeans Adapt

Mr Tay spoke of the need to help this group and uplift them. He added that NTUC is working with industry partners to provide them with support on this journey as it is certainly not easy.

He then talked about how he made use of his SkillsFuture Mid-Career Enhanced Subsidy (up to 90% subsidised course fees) and his own money and time to do a three-day course on the financial sector. 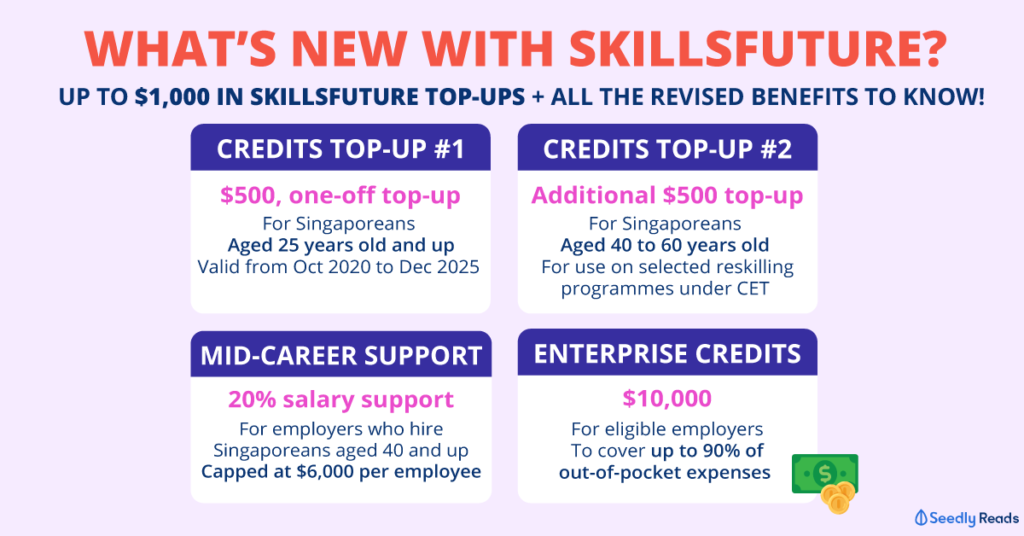 He mentioned that he found that the course was not the easiest and that he just scraped past the exam which required a 70 per cent and above grade to pass.

The pressure was on as he had to pass the exam or risk having to pay the full course fees if he did not pass.

He reflected that it was really not easy to pick up new skills as a mature worker and encouraged employers to be more understanding and supportive of their employees.

He also encouraged workers to keep an open mind take advantage of this generous funding to pick up new skills and information to stay Ready, Relevant and Resilient.

Honing these skills won’t hurt either. 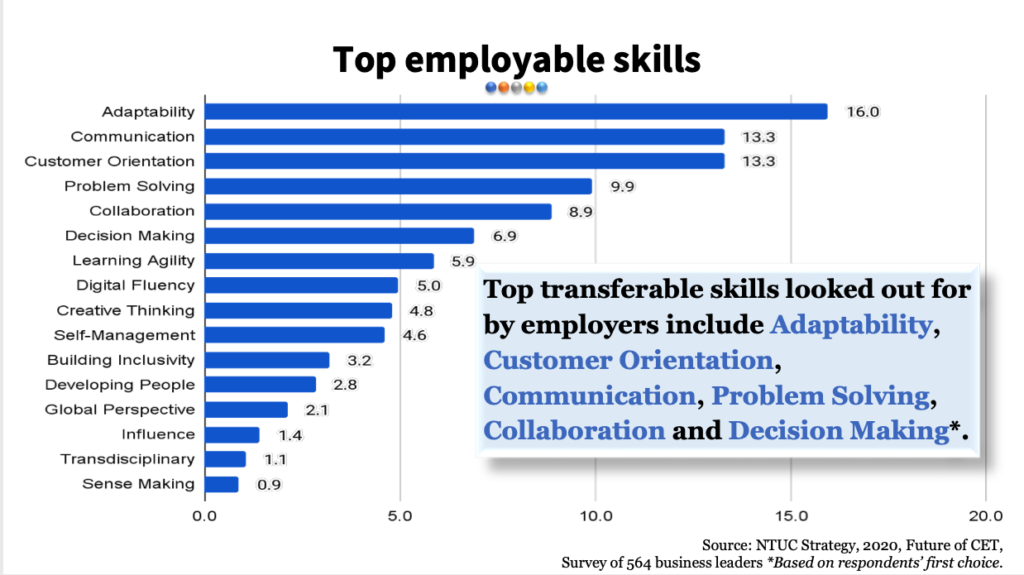 If you are wondering how to do so, you can tap on some of these resources:

He also reiterated the importance of having good networking skills and staying connected to the industry to stay employed and employable — especially if you are planning to take a break from work or have been laid off.

He advised looking for groups of like-minded people who practise the same craft and to attend their events and stay in touch.

This has a few benefits as you will be kept updated about the industry, be fed with valuable information and your job search might be easier as these connections might lead to word of mouth references which are still quite effective during the job search.

The key point is that almost every occupation has its groups.

A Seedly member also asked about the possibility of a four-day workweek in Singapore.

Mr Tay reminisced about how Singapore transitioned from a five and a half-day workweek to a five-day workweek in 2005.

The public sector implemented this policy and the private sector adjusted around it.

But an important thing to note is that even though we moved to a five day work week, Part IV of the Employment Act dictates that for common work arrangements your contractual hours of work are as follows:

Mr Tay then pointed out the example of France’s 35 hour work week and pointed out that they are just as productive as Singaporeans.

He then talked about how the question then boils down to output and how flexible companies can be.

The keyword he emphasised is flexibility which was helped by the COVID-19 pandemic as companies were forced to adopt flexible work arrangements.

It also depends on the company’s ability to set clear goals and key performance indicators which would indicate a focus on productivity instead of face time.

What Hawker Food Does He Recommend?

As someone who lives in the East or is an eastie, most of Mr Tay’s favourite food haunts are in the East.

Halfway through the show, Clara tested him about how much the Chai Tow Kway from Chinatown complex costs and unfortunately, he guessed wrongly and was off by $0.50.

But, he did manage to guess the price of the Rojak correctly so there’s that.

As for his preferred type of Chai Tow Kway, he mentioned that he preferred white carrot cake with lots of chilli due to his Peranakan heritage.

His favourite place to get carrot cake is at Bedok Interchange from Song Zhou Fried Carrot Cake located at #01-37.

To get the full list of his food recommendations, simply head on over to our Seedly Rewards page to claim it! 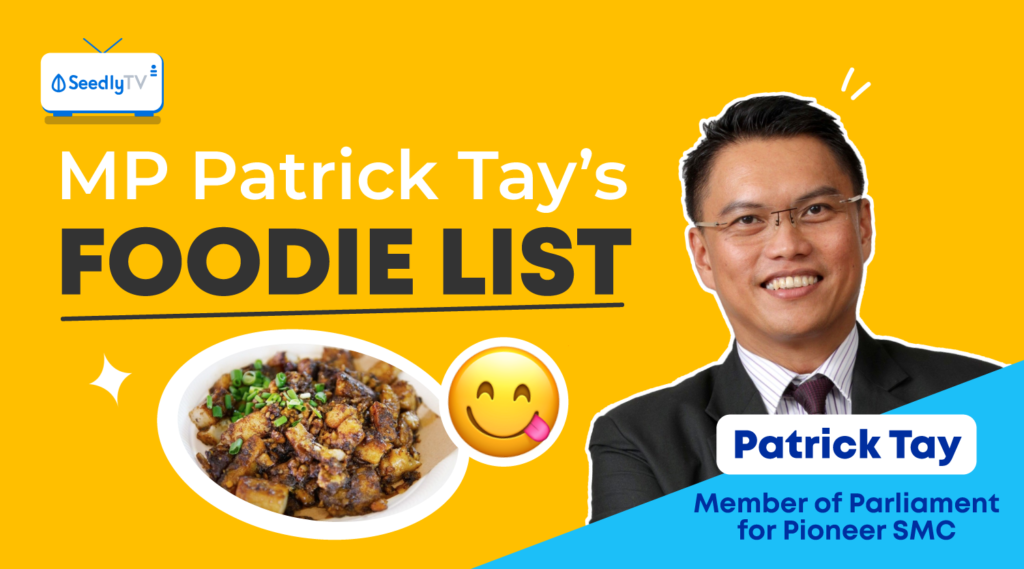