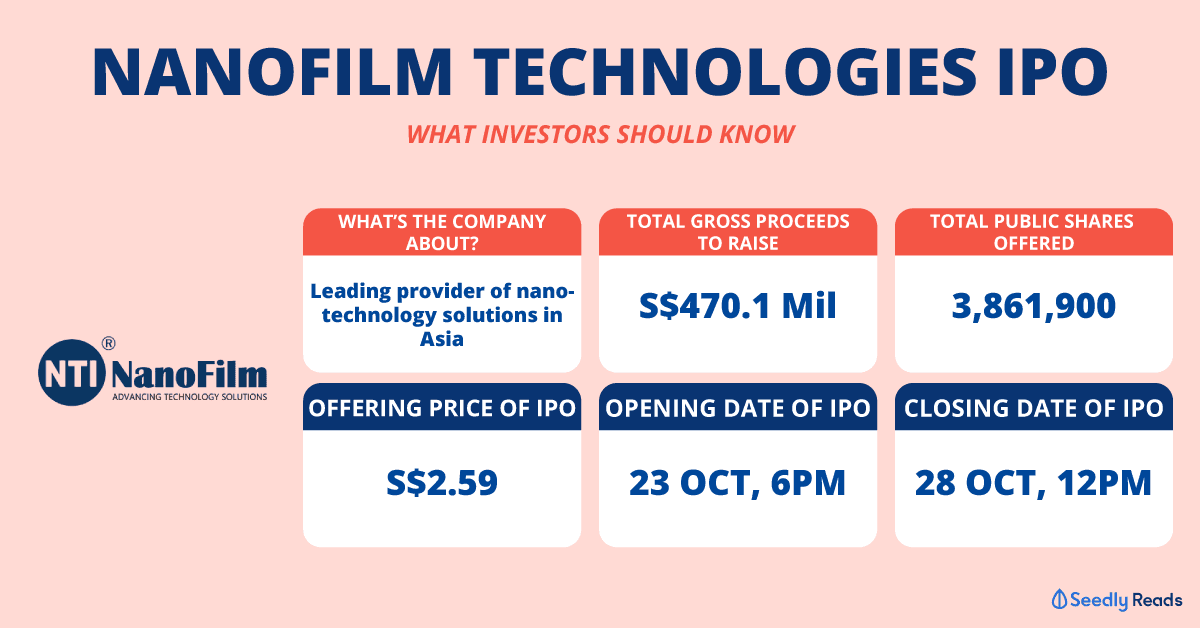 What comes to mind when I mention the words successful Singapore based company?

Well, it turns out there are still some hidden gems like Nanofilm Technologies International, which has launched its initial public offering (IPO) today.

The company is looking to raise gross proceeds of around S$470.1 million, making it one of the biggest non-real estate investment trusts (REITs) mainboard listings here in years.

The company would also become the first Singaporean tech unicorn (startups valued at more than US$1 billion) to list in Singapore.

Here’s what you should know about the upcoming mega IPO.

With gross proceeds of S$470.1 million raised from the IPO, Nanofilm Technologies plans to reinvest it into its businesses by spending on research and development (R&D), investing in engineering and expanding production capacity.

In addition, the company will use the capital for corporate and cash-flow/working capital purposes.

For the IPO, Nanofilm Technologies has reached an agreement with 13 cornerstone investors who have subscribed to purchase about 104.3 million of the company’s shares that are worth about S$270 million.

These investors include the likes of:

Another interesting thing to note is that if the sale of cornerstone shares and IPO is successful, Temasek will become a significant shareholder in the company.

This is because Temasek’s Vanda 1 Investments and Orchid 2 Investments under Heliconia (a unit of Temasek) hold Nanofilm’s convertible notes.

Before the listing, the notes will be converted to shares.

Nanofilm was started by CEO and founder Dr Shi Xu.

Shi left his comfy as an associate professor at Nanyang Technological University’s (NTU’s) School of Electrical and Electronic Engineering to start Nanofilm in 1999.

With just S$300,00 in startup capital, Shi ventured out to start the company as an opportunity to bring his research to the real world.

Today, the company employs over 1,400 employees, in Singapore, Japan, China and Vietnam, serving over 300 clients across various industries, including the likes of Canon, Huawei, Fuji Xerox, Microsoft and Nikon.

The company specialises in advanced materials, industrial equipment and nanofabrication; with applications in solar panels, smartphones, automobiles and cameras.

For example, the company’s patented filtered cathodic vacuum arc (FCVA) inline coating system technology remains the gold standard in the vacuum coating industry; as evidenced by the company owning 70 per cent market share in the sector.

According to Reportlinker, a French technology company that runs a professional search engine aggregating authoritative publicly sourced data in one place; the global nanofilm industry is big.

The global nanofilm industry is set to grow to be worth over US$5.1 Billion by the year 2025.

As the world’s second-largest economy and the new game-changer in global markets, China nanofilm market exhibits the potential to grow at 13.3 per cent over the next couple of years and add approximately US$774.9 Million in terms of addressable opportunity.

Several macroeconomic factors and internal market forces will shape the growth and development of demand patterns in emerging countries in Asia-Pacific.

However, the company will have to compete with competitors like Advanced Thin Films, Cosmo Films Ltd. and Metatechnica; Nano Labs.

It appears that Nanofilm is capitalising on this opportunity as the company is steadily growing its net profit and revenue.

During the same time period, the company also grew its revenue by 16.4 per cent to S$142.9 million.

During the same time period, the company grew revenue by 40.9 per cent to S$77.8 million.

As for dividends, the company paid out an interim dividend of 1.9 Singapore cents per share on 2 July 2020. But, it will not be paying out any dividends for the rest of FY2020.

At the moment, the company does not have any formal dividend policy.

But, the board of the company will recommend to distribute dividends of a minimum of 20 per cent of the company’s net profit after tax (not inclusive of exceptional items) recorded in FY2021, as a way to recognise the contributions of shareholders who have played a part in the company’s growth.

What Are Your Thoughts on the Nanofilm IPO?

If you have any questions about Nanofilm Technologies International and other stocks in general, why not head over to the SeedlyCommunity to discuss them with like-minded individuals?