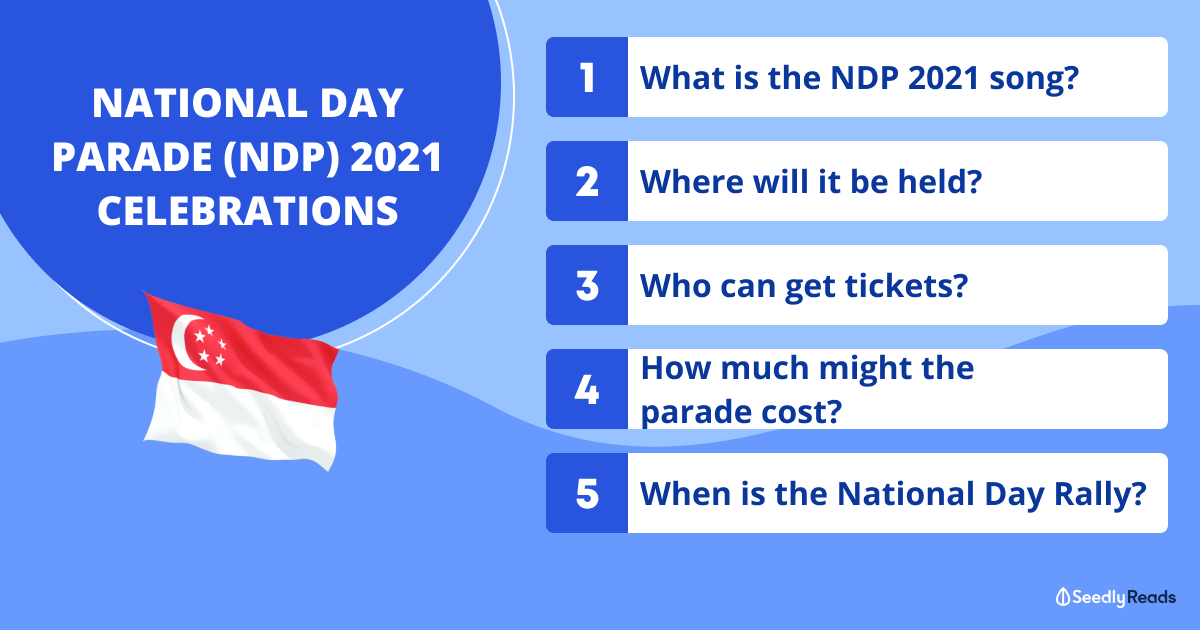 For the longest, time, we have celebrated the National Day Parade (NDP) in front of a live audience at centralised locations like The Padang, The National Stadium and The [email protected] Bay.

But due to the outbreak of the COVID-19 pandemic, NDP 2020 was celebrated in seven locations across Singapore instead.

This year will mark a return to regular programming as NDP 2021 will be celebrated in a centralised location (i.e. The [email protected] Bay) in front of a live audience on 9 Aug 2021.

Here is all you need to know about the parade!

Do note that we will update the article as soon as new information about NDP 2021 is relased.

So do save this article in your feed!

For this year’s NDP 2021, the theme is ‘Together, Our Singapore Spirit’, which develops on last year’s theme ‘Together, A Stronger Singapore.’

At last Friday’s briefing to the media (via CNA), Brigadier-General Tan Chee Wee chairman of the NDP 2021 Executive Committee (EXCO) stated that:

In NDP 2021, we will see our Singapore spirit, characterised by our ‘can-do’ attitude, our unity and our resilience.

We hope that NDP will provide a rallying call for Singaporeans to come together, draw strength from our Singapore spirit, and have the confidence to build a better Singapore.

The theme is woven into this year’s logo, a lion’s head featuring the number ’56’ which according to the EXCO is a ‘representation of the nation’s strength of will and unity and marking the country’s 56th year of independence.’

In addition, this year’s NDP will be somewhat of a hybrid event with the EXCO stating that it will ‘harness technology and connect performances for the first-ever live-virtual performance at NDP’.

Also, what’s NDP without a song.

This year’s NDP song is entitled The Road Ahead and was put together by a talented homegrown team.

The song was written by singer-songwriter Linying and music producer Evan Low. For this song, Dr Sydney Tan reprised her role as a music director.

The Road Ahead was performed by local artists Linying, Sezairi, Shye, and Shabir.

As for the music video, it was directed by local filmmakers Huang Junxiang (Ramen Teh, Buffalo Boys, Apprentice) and Jerrold Chong (Piece of Meat, Automatonomy, What Has To Be).

No cap the song is pretty good.

Defence Minister Ng Eng Hen announced on Monday (28 Jun 2021) that this year’s NDP will be held at The [email protected] Bay.

However, this year’s parade will not be as big as previous years as the number of spectators and participants ‘scaled-down appropriately’ due to COVID-19.

If you are looking to watch NDP live this year, I am sorry to disappoint as NDP 2021 tickets will not be open for public balloting in light of the COVID-19 pandemic.

Rather, the tickets will be distributed to COVID-19 front liners, essential workers and community volunteers in recognition of their contributions to the fight against the disease.

Also, all who are attending the parade will have to be fully vaccinated.

As for the guestlist for the parade, it is a work in progress as the EXCO is in the midst of working things out and collaborating with agencies to nominate Singaporeans.

Subsequently, the guests will be invited when details are firmed up.

The parade will be scaled down this year as there will be less participants and spectators compared to past year’s parades.

The exact number will be confirmed at a later date.

Thanks to questions asked during Parliament and announcements on the news, we’re able to get a good sense of how much NDP might cost.

I will be referencing this post from my colleague Kenneth. 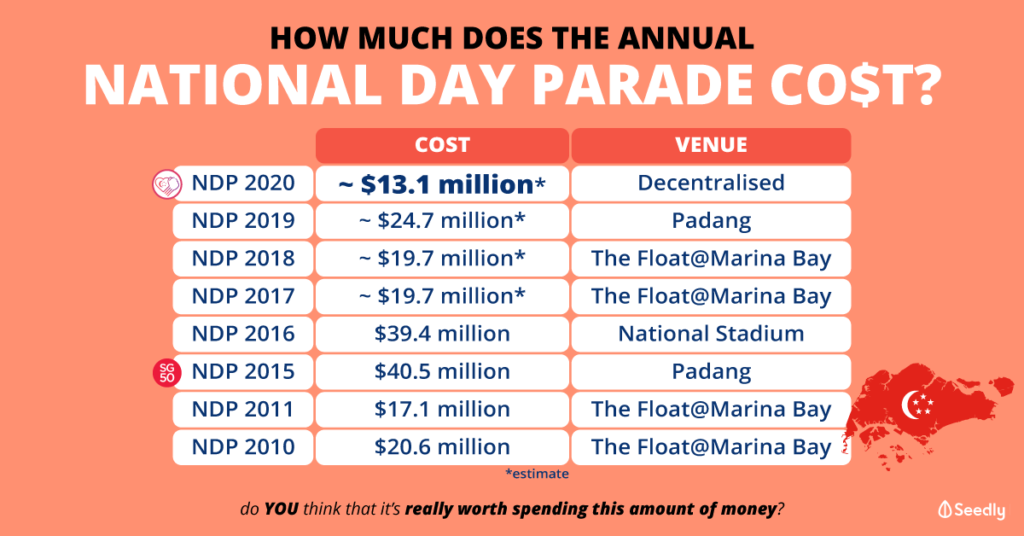 To figure out how much the previous NDPs cost, I checked Parliamentary announcements and news sites. And managed to get data from 2002 all the way till 2016.

The latest and most concrete cost announced for an NDP would be for NDP 2016. Where the rental of the National Stadium pushed the cost up to $39.4 million.

Comparatively, NDP 2017 was held at The Float @ Marina Bay. And since holding it at the National Stadium, like in the previous year, costs double the price. I estimate NDP 2017 to cost about $19.7 million — give or take.

Since NDP 2018 was held at the same venue, The [email protected] Marina Bay. I reckon that my previous estimate of $19.7 million still rings true since there aren’t any official figures — which I can find.

NDP 2019 was when we went back to the Padang. If we looked at NDP 2004 to 2005, and NDP 2009 to 2010, you’ll notice that there’s usually an increase of ~$5 million which I presume is to build the infrastructure for the stage and seats (which would already be in place if we just used The Float @ Marina) at the Padang.

Side note: I’m guessing that’s one of the considerations that was brought up when deciding to build the NS Square.

Which is basically the re-development of The Float @ Marina Bay into a space to commemorate national service and to be used for future NDPs.

So… for NDP 2020, I’d say it’ll be a tad unfair to use NDP 2019’s estimated cost as a base since it was held at Padang and is inflated by the need to build infrastructure.

Which is not too bad (in terms of financial prudence), as it brings us close to NDP 2017 levels.​​​

To put this into context based on the estimate, NDP 2021 will cost each person in Singapore $3.46 based on Singapore’s latest population of 5,685,807 people in 2020 according to the Singapore Department of Statistics (DOS) in 2020).

Following the parade, Prime Minister Lee Hsien Loong will then deliver this year’s National Day Rally speech on 22 Aug 2021 from the Mediacorp Campus at 1 Stars Avenue.

I would think that it’ll be important to tune in as the speech is regarded as the political speech of the year.

The speech will be used as a platform for the Prime Minister to address Singaporeans and fill us in on the vital issues that the Government is prioritising in the near future.

This marks a return of the National Day Rally which was cancelled last year due to the outbreak of the COVID-19 pandemic.