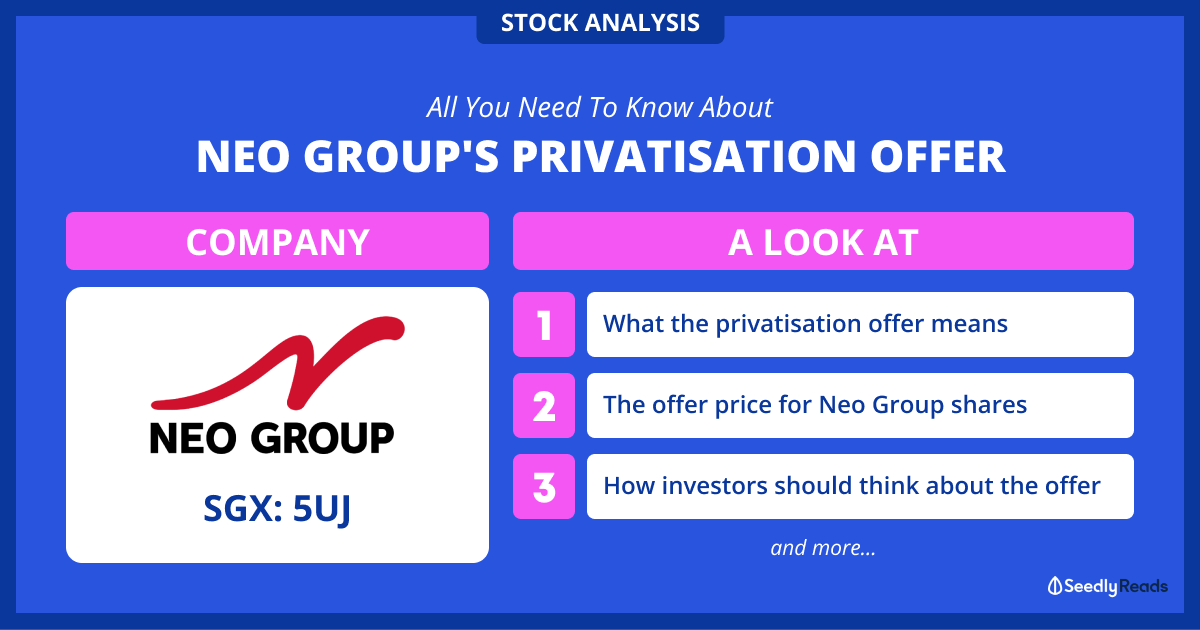 Neo Group Ltd (SGX: 5UJ), which owns brands such as the eponymous Neo Garden, Deli Hub, and Orange Clove, may no longer be a listed company.

Forestt Investment is looking to acquire all the shares in Neo Group and eventually privatise the company.

Here’s what investors should know about the announcement by Singapore’s number 1 events catering company.

Key highlights from the announcement:

Forestt Investment (also known as the offeror) is making a voluntary conditional cash offer for Neo Group’s shares at S$0.60 per share.

The offer price is a premium of around 20% over the closing share price on 29 March, the last full trading day before the announcement.

The offer price is also the highest closing price of Neo Group’s shares in the past 2.5 years or so.

However, that is not the highest Neo Group’s shares have traded since listing in 2012.

Details of the Offeror and Its Plans

Neo is also the founder, chairman and chief executive of Neo Group while Liew is Neo Group’s executive director and Neo’s spouse. Together, they own around 82.3% of Neo Group.

A conditional offer is basically a takeover offer that requires certain conditions to be fulfilled.

In Neo Group’s case, the condition is that there has to be a minimum of 90% acceptance for the offer. This threshold is not difficult to achieve, since both Neo and Liew have agreed to tender their shares to the offeror.

Forestt Investment wishes to delist Neo Group and privatise the company if the offer goes through.

(To know what privatisation means, you can check out an article my colleague Joel Koh has written previously.)

The offeror believes that privatising Neo Group will provide the company with “greater control and management flexibility to manage the business of the Group, respond to the changing market conditions and optimise the use of the Company’s management and resources”.

Since its listing in 2012, Neo Group has not tapped into the stock market to raise additional capital and is unlikely to do so in the future. So, there’s no need for the company to be listed and it can also save on listing expenses and costs if it’s taken private.

What Next for Retail Investors of Neo Group?

Neo Group shareholders will receive the offer document stating the details of the offer, together with the acceptance forms, 14 to 21 days from today.

This means that they will get the document anytime between 13 April and 20 April.

Shareholders have at least 28 days from the date of the offer document’s posting to accept the offer.

My Take on the Neo Group Privatisation Offer

Over the past few years, Neo Group has increased its revenue, net profit and return on equity at a healthy clip:

According to Shareinvestor, the company had an average P/E ratio of 19x over the last four financial years. Currently, the P/E ratio of Singapore-listed companies under the food sector averages around 18x.

Given the historical data and growth potential that Neo Group has, I feel the offer price of S$0.60 is on the low end.

Neo Group could continue growing its business over the longer run, especially as the economy further opens up as more Singaporeans are vaccinated.

The company said in its FY2021 first-half earnings announcement that it saw a gradual improvement in its catering business as Singapore re-opened in June 2020, and there could be more to come.

Neo Group is also building up its capabilities further.

For one, it is in the midst of constructing its headquarters and catering hub at 30B Quality Road.

The hub will house many of its catering brands, consolidating its operations under one roof and bringing about significant cost-savings.

In all, assuming the FY2020 EPS of 4.3 cents can be maintained in FY2021 (a conservative estimate given what was discussed above) and with a P/E ratio of 19x, I would prefer an offer price of S$0.82 at least.

But with the controlling shareholders having a significant stake in the company, there may not be much that retail investors can do.