TL;DR: New Condo Launches To Look Forward To In 2019

Most years start at a relatively sedate pace, with just a sprinkling of new launches.

Several developers have already lined up previews in January, ahead of Chinese New Year on Feb 5. They include Roxy-Pacific Holdings’ Fyve Derbyshire and RV Altitude; TEE Land’s 35 Gilstead (the former Casa Contendere); One Meyer by Sustained Land; and Jervois Prive (former Jervois Green) by a consortium led by the owner of Spring Court restaurant, says Ismail Gafoor, PropNex executive chairman and CEO.

Another slate of new launches is being readied for launch after Chinese New Year, and these are bigger projects, including SingHaiyi’s The Gazania (former Sun Rosier) and The Lilium (former How Sun Park).

The two biggest projects that will be rolled out in 2019 are the former Normanton Park (1,882 units) and Treasure at Tampines (former Tampines Court), with more than 2,000 units. “These are also likely to be launched in 1Q2019, after Chinese New Year,” says Gafoor.

In the pipeline for launch in 2019 are about 60 projects. “The window of opportunity for launching projects is just eight to nine months,” says Gafoor. This is after discounting Chinese New Year (February), the June school holidays and December holidays, he says. 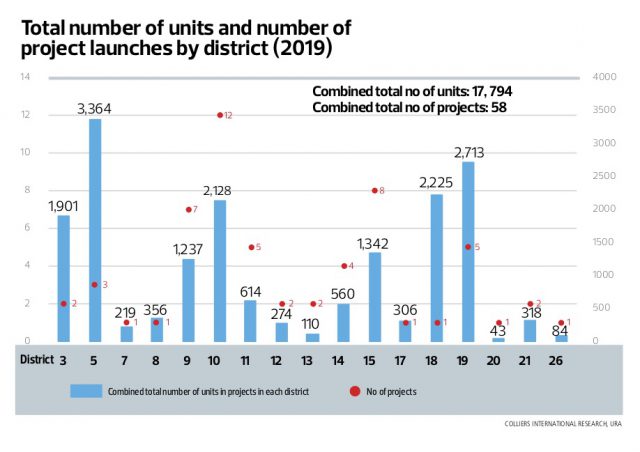 With the ramp-up in the number of projects coming onstream, developers are also likely to deploy “all kinds of marketing strategies — from special offers at soft launches to incentivising agents — to make the best of their launch”, adds Sim.

Hot Areas With The Most Launches

This year is likely to close with 40 new projects and a total of 14,000 units launched, says Tricia Song, Colliers International head of research for Singapore. In the pipeline for launch in 2019 are an estimated 55 to 60 projects, offering 17,000 to 18,000 new units. “Depending on market conditions, some of these project launches may spill over into 2020,” she reckons.

Based on en bloc and government land sale (GLS) sites sold from end-2017 to 1H2018, there are more projects that could be launched in Districts 10 and 15, says Colliers’ Song (see chart).

“Prime locations such as Holland Road and Bukit Timah in District 10 and the popular East Coast enclave in District 15 have not seen new launches of large projects – more than 250 units – in a long time,” adds Song. “These new larger projects are able to provide a variety of facilities and social spaces for residents.”

New launches in the Amber Road-Meyer Road neighbourhood should see “keen interest”, given their proximity to East Coast Park and Katong,” says Ong Teck Hui, senior director of research at JLL. “The popularity of East Coast among the expatriate community makes properties in the area good for both owner-occupation and investment,” he adds. “East Coast diehards will eagerly await the launch of these projects.”
The Thomson-East Coast MRT Line is also expected to be ready by 2023, notes Colliers’ Song. “Residents in these projects will get to enjoy the convenience of the commute to the city and the proximity of these projects to good schools.”

2019 will see at least a handful of projects with more than 1,000 units. “Some of these launches will be spread out to 2020, as there were significantly fewer land sales since July 2018,” says Song. Many of these sites are redevelopments in privatised HUDC estates purchased en bloc from 2H2017 to 1H2018. The biggest is Treasure at Tampines on the site of the former Tampines Court (2,225 units). Florence Residences on the site of the former Florence Regency (1,410 units) is another new launch.

“Tampines Court has limited competition in the locality,” says Song. “But owing to the sheer size of the project — 2,225 units — it is likely to be priced competitively and still offer a compelling theme.”

Florence Residences located on Hougang Avenue 2 in District 19 is in an area that saw a high level of new launches in 2018: the 613- unit Garden Residences; the 1,052-unit Affinity at Serangoon; and 1,427-unit Riverfront Residences. “Thus, the developer needs to either offer something differentiated or compete on pricing,” says Song.

Two new mega projects that will feature about 1,000 units but occupy sites purchased in GLS are:

“The EC project should sell well because it’s the only one to be launched in 2019,” says PropNex’s Gafoor.

These launches “should be fairly exciting to watch”, given their huge plot sizes, which would allow developers to come up with interesting development concepts, says JLL’s Ong. He sees these projects “remaking” their neighbourhoods, especially if they incorporate “fresh ideas and concepts that spell a different living and lifestyle experience for home buyers”.

These “mega projects” tend to be located in the suburbs and would, therefore, draw buyers looking for opportunities at, or near, entry-level pricing for new private homes, adds Ong. “They would meet the needs of owner-occupiers, including HDB upgraders.”

The 800-unit new project on the site of the former Pearl Bank Apartments is another highly anticipated large-scale development because of its city-fringe location, says Ong. He expects the new project to “set new benchmark prices” in the neighbourhood, owing to “the breath-taking views” from the high-floor units and its proximity to Outram MRT station.

About 40% of projects headed for launch in 2019 are in prime Districts 9, 10, and 11. Developers of these projects have the option of showcasing them overseas if sales at home are soft, says Nicholas Mak, ZACD Group executive director and head of research. These projects appeal to an international audience because of their freehold tenure, and proximity to the Orchard Road shopping belt and top international schools, he adds.

While the additional buyer’s stamp duty (ABSD) for overseas buyers is high — at 20% since July, from 15% previously — Singapore still looks compelling compared with other global markets such as Hong Kong, Canada, Australia and the UK, “which have equally high tax regimes for foreign homebuyers”, points out Mak.

With the ramp-up in the number of new launches in 2019, the number of new units sold could range between 8,000 and 10,000 units, estimates JLL’s Ong. “Demand will depend on economic and business conditions, which are contingent on external factors such as the [US-China] trade war.”

The housing market is expected to be more challenging as well, with exuberance already curbed by the cooling measures in July 18 and the new regulation regarding minimum average unit sizes outside the Central Area announced in October. “No further cooling measures are expected [in 2019], though,” says CBRE’s Sim. “Still, sentiment could be hit by rising interest rates.

If demand is supply-led, new-home sales in 2019 could still do better than in 2018, says Colliers’ Song. “1H2018 was really handicapped by a lack of available launches and choices,” she adds. “2019 should see a gradual acceptance of the new cooling measures.”

She expects developers to sell 9,500 to 10,000 new homes in 2019, “amid the substantial pipeline of new projects that could be launched for sale”. She adds: “Developers are also likely to look towards a progressive and sustainable sales target to achieve full take-up within five years.”

Developers are aware of home buyers’ “price sensitivity” and are pricing their projects accordingly to attract them, says Gafoor.

ZACD’s Mak agrees, saying: “Most developers are realistic. They know it will take more than a year to sell all units in a project with more than 400 units. They are unlikely to slash prices to sell quickly, as this will hit their bottom line.”

Selling out projects too quickly will mean having to buy new land parcels at a higher cost – given the 5% ABSD that they have to pay upfront, adds Mak. “It makes more sense for them to maintain their prices at a steady pace of sales until after the fourth year [of launch]. It’s only then that developers have to decide whether to adjust prices. They will still have one more year to sell all the units in the project before the 25% ABSD kicks in at the end of the fifth year.”