No-Spend-Week Challenge Results: How I Bought Nothing For A Week! 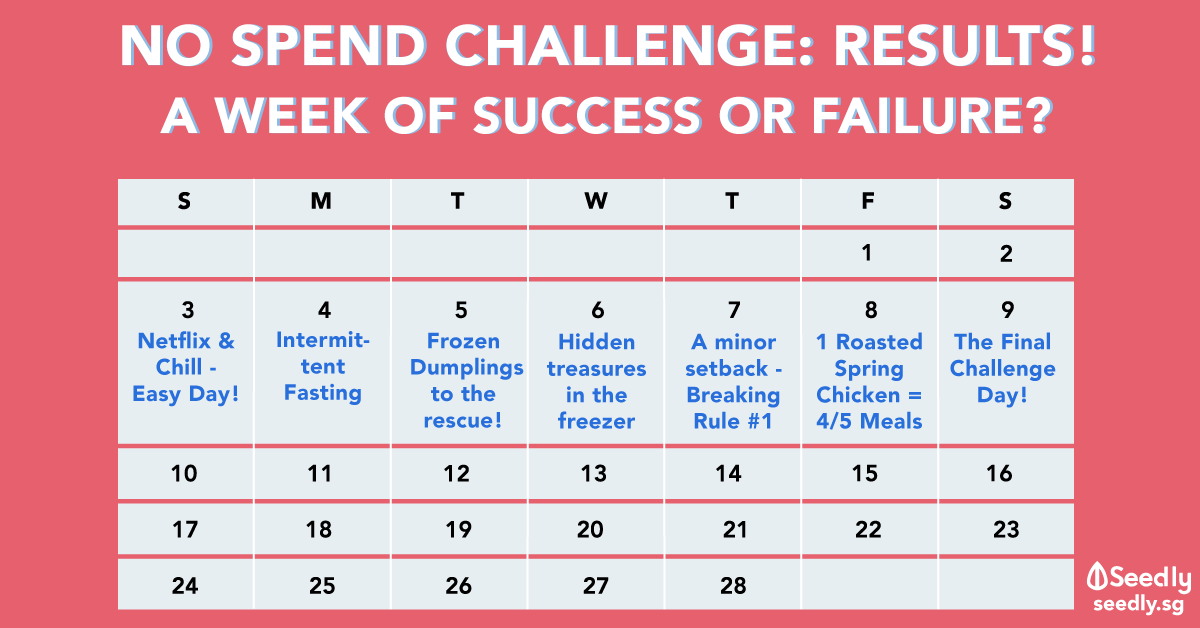 No-Spend-Week Challenge Results: How I Bought Nothing For A Week!

I challenged myself with a No Spend Week Challenge earlier in the year to push myself a little harder to see what happens if I tried not to buy anything for a week. You can read about the rules and exceptions I had set for myself below. 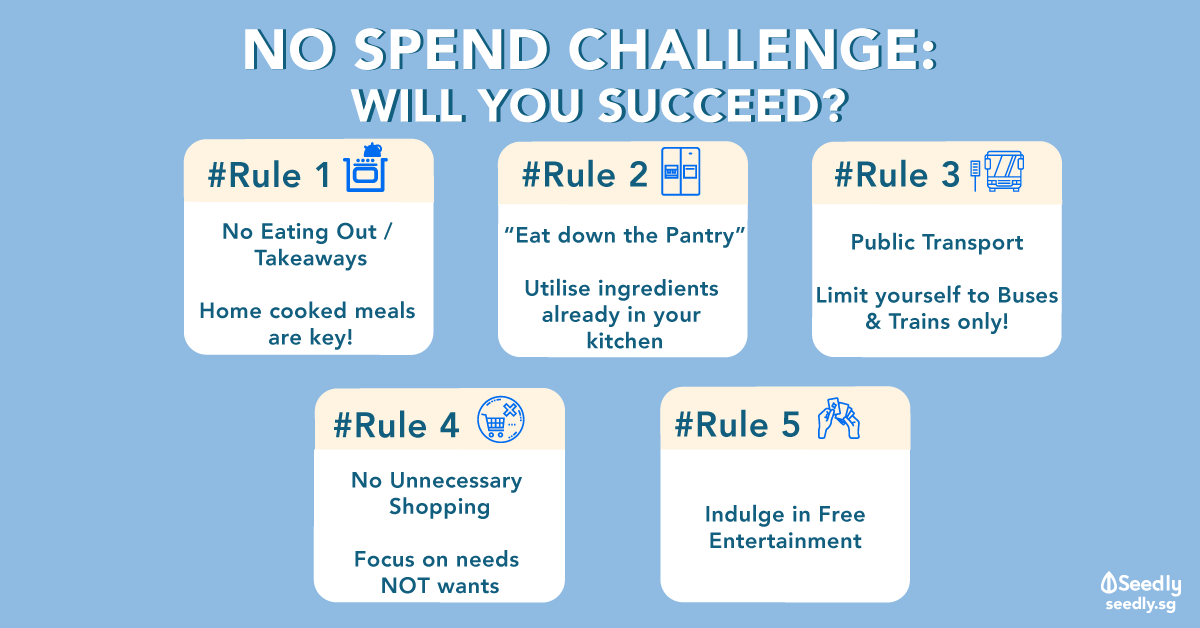 Here’s how the challenge went!

I woke up early as usual and made breakfast. I made a large burrito using some salami and cheese that I found in the fridge and topped it off with scrambled eggs. Easy peasy!

The first work day of the week went by faster than I expected. I skipped breakfast as I was trying to fast intermittently in the earlier part of the day and intended lunch to be my first meal. I found a can of cream of mushroom in the pantry that’s been around for the longest time and decided to cook that for lunch. I added chopped bits of winter salami that I bought in Budapest during last year’s vacation and the combination worked like a charm. I also toasted some garlic bread to go with the soup.

When you have a fixed schedule like work, time goes by really quickly and before you know it – it’s time to go home. The only change I made today was, instead of going to the shopping mall after work, I headed straight home to avoid the temptation to spend money.

Day 3 posed a different challenge on its own.

I found that we had way too many frozen dumplings (my mum seemed to love buying them) so I decided to cook them for lunch. I purchased a bottle of Lao Gan Ma chilli because we ran out (so that didn’t break any rules) and made a very basic version of Sichuan Spicy Wonton in Red Oil (红油抄手). I also brought along the last 2 Char Siew Pau (I didn’t think they would last very long in the fridge and decided it was best to eat them soonest) just in case the dumplings didn’t fill me up.

The real challenge was going for a meeting with a headhunter at Starbucks to discuss some of the roles that she wanted to recruit me for. I decided not to order drinks since it was a No Spend Week and the headhunter did not order any drinks as well.

Maybe it was because the queue was long and it would be awkward for her to have a drink while the candidate wasn’t having one. This might just be one thing I would consider making an exception for in future challenges.

Today was a tough one. I wanted to get back on my morning bike rides so I hopped on and went cycling with my usual crew at 5 am. We did about 40 km which consequently made the craving for snacks even harder to resist. Alas, I resisted buying drinks at the rest stop and was glad the water I had with me was just enough to last the ride home.

Back home, I found a packet of frozen prata in the freezer (who knew right?). So, I made one for breakfast, together with a hard boiled egg.

I prepared my work lunch the night before since I was going cycling in the morning. Essentially just some dried noodles with a spicy chill sauce (using the aforementioned Lao Gan Ma chilli sauce with vinegar and soy sauce) coupled with a few meatballs.

They worked really well for a packed lunch. I even made some Vietnamese quick pickled carrots as a side dish. Yummy!

I screwed up! The day went well with a simple egg and spam burrito for lunch as I was planning to attend a lunch event. That didn’t happen due to a morning meeting that went longer than expected.

Unfortunately, I had forgotten about a meeting in the evening and hence, wouldn’t be home for dinner. So that meant I had to break rule #1 – no eating out.

To keep the expenses low, I decided to eat at a hawker centre. Bummer!

This was probably the easiest No Spend day by far. I didn’t even have to cook anything for lunch as there was leftover fried rice and braised pork belly from last night’s dinner. I decided to do some grocery shopping for the weekend and bought roasted spring chicken and a packet of mozzarella cheese.

Roasted spring chicken has always been my favourite grocery purchase because I could usually creatively transform 1 ingredient into 4-5 meals.

On the last day and despite it being a weekend, I had no plans so I stayed at home and relaxed. I toasted some garlic bread for breakfast while making early preparations for lunch.

I placed the roasted chicken bones from last night’s dinner in the slow cooker with cold water to make chicken broth. After a few hours in the pot, I added some vegetables into the broth to add more flavour. Once ready, I paired it with the remaining roasted chicken wings and a packet of udon.

The day was spent catching up on a Chinese television series while sipping Pu’er tea. A simple, relaxing day.

What I’ve learned from this challenge

I’ve learnt that it takes effort to truly excel in this challenge. In order to spend nothing on buying water, I had to remind myself to pack a bottle of water in my bag so that I could stay hydrated outdoors.

The ability to be creative with food ingredients and condiments played a part as well as I had to to come up with 2-3 different dishes using similar ingredients so that I would not get sick of eating the same thing over and over again.

Would I do a No Spend Challenge again?

It really depends on the objectives.

If the goal of the challenge was to save money, I believe I had not saved as much since I had always been rather frugal with my discretionary expenses.

But if the goal was to “eat down the pantry” and reduce the amount of food and ingredients in the pantry, I would deem the challenge worthy because it had certainly helped to reduce redundant foodstuff and wastage.

What do you think your biggest challenge would be if you were to challenge yourself with a No Spend Week Challenge?

Seedly Contributor: Mickey at Retire By 50

Mickey J is a typical white collar Singaporean who works in a 9-5 desk job. With a goal to retire by the age of 50, he blogs about his personal finance experiences and thoughts on retirement planning.

He believes in keeping thing simple and automated to focus on the more important things in life.

Retire By 50 is all about personal finance and retirement planning in the Singapore context.