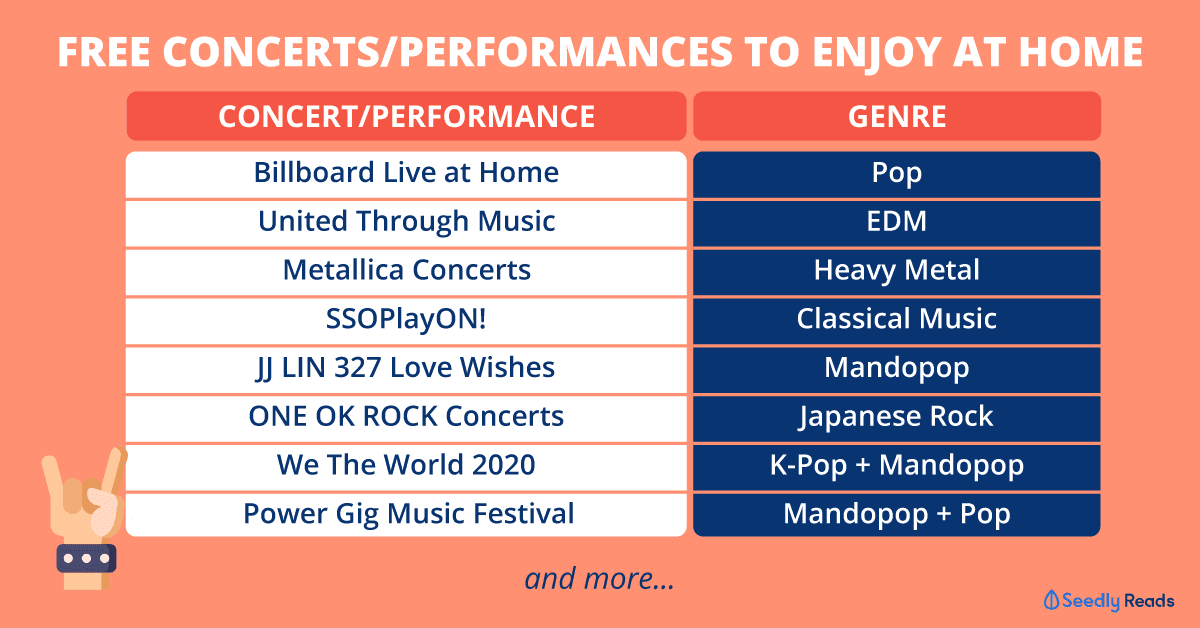 We’ve all heard the idiom, “Music is good for the soul.” But according to research, it’s good for your mental health as well.

A study published in the Nature Neuroscience journal suggests that listening to music releases dopamine — the feel-good chemical that is released when you engage in a rewarding feel-good activity.

The study also found that the amount of dopamine released was 9% higher when participants were listening to the music that they like.

Although it may seem quite obvious. This study provides strong evidence for the link between listening to music and our mental well being.

Personally, I am a big believer in this as music is a big part of my life. I listen to music on the daily and I love discovering new music.

I could survive without it but without it, my mood would be considerably worse.

As such, I would like to share the joy with you during this difficult time in the midst of the COVID-19 outbreak.

TL;DR: 13 Awesome Online Concerts and Performances to Cheer You up During Circuit Breaker

Bored at house and in the house bored?

You can tune in to the Billboard Live at Home Concert series.

The formula for this is simple — livestreamed mini-concerts you can enjoy from the comfort of your home.

Each week, an artiste will perform live to raise funds for a nonprofit of their choice to help those most affected by COVID-19.

For the week of April 27. Billboard will feature at-home sets from Jason Mraz, Jesse McCartney, Vanessa Carlton, and more.

2) Gary Barlow (of Take That Fame) – The Crooner Sessions

Gary Barlow of Take That fame has found a great way to entertain his fans and subtly flex his list famous artiste friends.

But hey, we are not complaining as he is keeping us entertained while we stay at home and events get cancelled.

Every day at 12 am SGT, he has been posting a new video of him performing a live duet with his friend over a video call.

The stars that have sung with him include legends like Queen’s Brian May, Ronan Keating, Sir Cliff Richard, Robbie Keane and Keane’s Tim Rice-Oxley.

3) United Through Music – Party With the World’s Biggest DJs

Unfortunately, this year’s Tomorrowland, the biggest EDM festival in the world was postponed due to the COVID-19 outbreak.

As much as that sucks, the party does not stop there.

The festival has set up a string of live-stream sets to try and bring people together through music in these uncertain times.

The likes of Afrojack, Alesso, Carl Cox, Steve Aoki, Carl Cox and Vini Vici have graced this show from their homes.

The next instalment for the week of 27 April (week 5) features:

How to Watch: You can tune in via their YouTube page

4) #MetallicaMondays – Rock out to Metallica’s Past Concerts Online

Fans of Metallica and metalheads will be excited to know that they have been streaming their past concerts on YouTube every week.

They have already featured the following concerts:

This week, they will be featuring their 1991: Live in Muskegon, Michigan concert.

How to Watch: You can tune in via Metallica’s YouTube channel.

British alternative rock band Radiohead were supposed to tour the world in 2021. But the coronavirus outbreak put a stop to that.

Instead, they have been sharing classic archival footage of concerts from their storied career on their YouTube channel during the coronavirus lockdown.

The series will continue on a weekly basis “until either the restrictions resulting from [the] current situation are eased, or we run out of shows.”

They have released their past concerts which include:

Date and Time: Concerts will be released weekly on Fridays, 5AM SGT

How to Watch: You can tune in via Radiohead’s YouTube channel

Every Friday, the Esplanade will upload performances from local and regional acts.

Date & time: Weekly on Fridays.How to Watch: You can tune in via the Esplanade Offstage YouTube Channel.

The Singapore Symphony Orchestra (SSO) has been streaming their concerts on their YouTube channel since April 4.

The series entitled SSOPlayOn!, the digital season aims to lift spirits and unite the community through classical music.

This will series will go on for three months, and they will be airing pieces that have never been seen before.

Date and Time: Three to four concerts are released on specific days each week:

How to Watch: You can tune in via the SSO’s YouTube Channel.

Taiwanese Mandopop star Eric Chou Eric famous for his emotional hit ballads like How Have You Been (你,好不好) and The Distance Of Love (以後別做朋友).

Even someone as jiak kantang (hokkien for westernised) as me knows his songs.

The singer sang his heart out on YouTube Music Night, a series of online performances organised by YouTube.

During this hour-long performance, he also answered questions from fans. Well worth the watch.

The singer expressed that he wished to use music as a way to bring everyone together and deliver a message of love and hope.

The biggest stars from the K-Pop and Mandopop industry will be joining hands to raise funds to fight COVID-19.

The concert entitled We are The World 2020 has been likened to an Asian Live Aid.

Viewers will be able to donate in real-time, with all proceeds going to the World Health Organization‘s Coronavirus Relief Fund and the Community Chest of Korea.

How to Watch: Concert will be on YouTube and Chinese social media platforms.

Speaking of COVID-19 relief concerts, Believe in the Future, a Chinese online benefit concert has been announced.

Backed by four major internet platforms — Damai.cn, Xiami Music, NetEase Cloud Music, and Sina Weibo, the concert is set to be quite the event.

Mandopop diva Faye Wong has been named as one of the artistes who will take part. 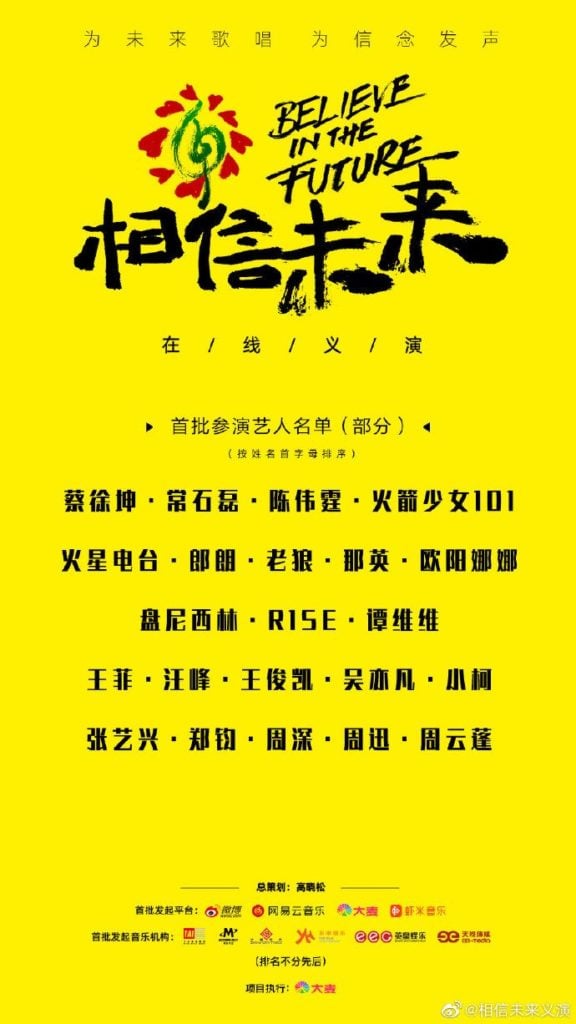 Concert Details: To be announced, check their Weibo for more details

12) ONE OK ROCK Past Concerts

Like Radiohead, legendary Japanese rock band ONE OK ROCK had to postpone their Asia tour (including Singapore) due to the COVID-19 outbreak.

Fun fact: The band’s name comes from “one o’clock”, the time that the band used to practice their music on weekends as it was cheaper to do so.

They have been streaming their past concerts exclusively via YouTube premiere on their channel.

You can catch their 2014 – 2017 concerts from now till the end of May on their YouTube channel.

Date and Time: 10 pm SGT on various scheduled dates till 31st May.

More information on the initiative including information about how to donate can be found on their website. To support the community, Senoko Energy will match public donations dollar-for-dollar, up to S$30,000.