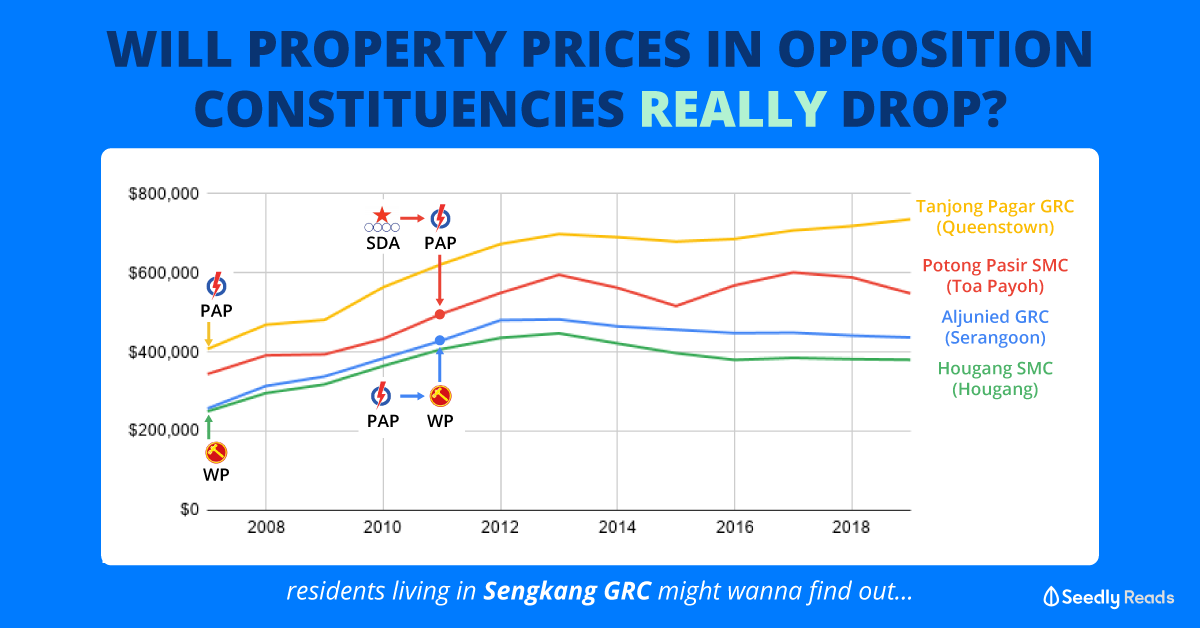 When the results of the Singapore General Elections 2020 were announced.

It’s no surprise that PAP is back in Parliament as the supermajority — albeit with lesser seats.

And many felt that their collective voices were heard when the Workers’ Party added the recently formed Sengkang GRC (Group Representation Constituency) to their ranks.

But what struck me the most, was this remark which my grandmother made, “The people living in Sengkang siao liao. Property value sure drop.” (she said this in Hokkien)

Which got me thinking…

Why is there this myth that properties in opposition-held constituencies don’t get developed as much?

And will the value of properties in opposition GRCs and SMCs really drop? 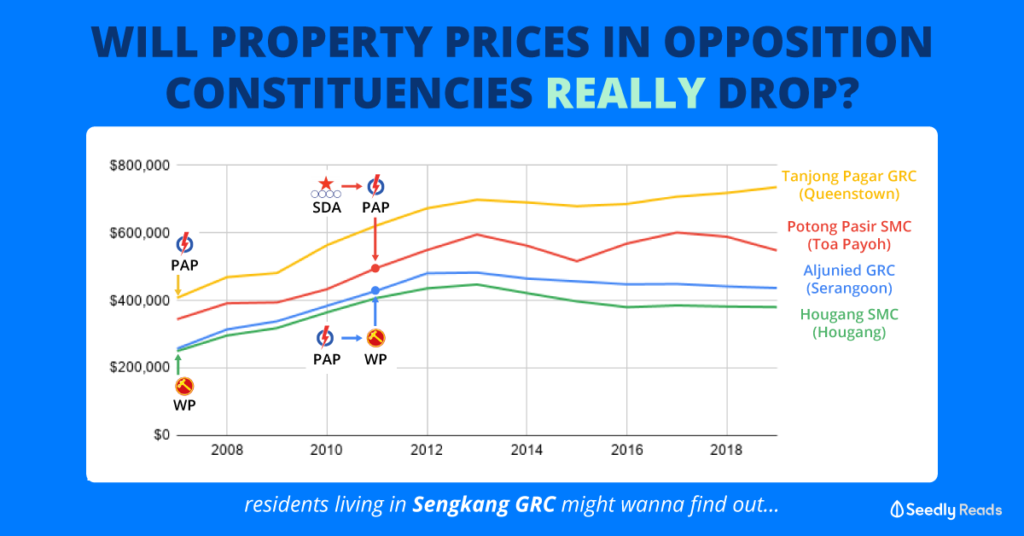 No matter which constituency or town your 4-Room HDB flat is in.

Logically, you can infer that property prices are not influenced by whether it is in a PAP or an opposition ward.

So… residents of Sengkang.

Regardless of which political party is in charge of your ward.

It is not going to affect your property’s value or appreciation.

A Singaporean Myth: Vote PAP and Get an HDB Upgrade

When Mr Goh Chok Tong became Prime Minister back in 1990, he launched the Main Upgrading Programme — now absorbed into the Home Improvement Scheme — to improve the living environment of residents.

Many critics have pointed out that the introduction of the upgrading programme was a thinly veiled attempt to link it with the gathering of electoral votes since coming into office.

And as with most criticisms of the government…

The PAP’s alleged tendency to dangle estate upgrading and lift-upgrading programmes as election carrots eventually became a recurrent one.

Interestingly, during the lead up to GE 2006, then-Senior Minister Goh Chok Tong, announced a $100 million upgrading plan for Hougang.

That year, however, the residents of Hougang and Potong Pasir voted for the opposition instead.

Arguably, this effectively demonstrated how money politics doesn’t work in favour of garnering the popular vote.

But then, in 2011, the late Minister Mentor Lee Kuan Yew, remarked during the polls that,

“If you have the wrong government, your property prices go right down. Ask why in Hougang the property is not as high as their neighbours.”

And that the residents of Aljunied will have “five years to live and repent”.

Most recently, former Minister in Prime Minister’s Office, Mr Ng Chee Meng, shared this on his Facebook page when campaigning for Sengkang GRC:

You see why this myth, whether it’s really true or not, is ingrained in the psyche of Singaporeans?

More than 80 per cent of Singaporeans live in HDB flats.

And since an HDB flat is such a big-ticket item.

(For most of us, at least, since the majority of our net worth would be measured in terms of the value of our property.)

I can understand why Singaporeans living in Sengkang would be concerned about the value of their HDB flats — now that Workers’ Party is taking care of Sengkang GRC.

Let’s see if there is any truth to this myth about properties in opposition constituencies.

To do so, I decided to take a look at the resale value of HDB flats across constituencies to see if there is any truth behind this myth.

And since 4-room HDB flats are one of the most popular options in the market.

I’ll be focusing my energies on resale transactions involving that particular flat type.

GRCs and SMCs Which Have Switch Hands

I managed to find the median resale prices by town — registered since 2007.

With this info in hand, here’re my considerations:

*This is to simplify things, because some towns may belong to a different constituency due to the mapping of postal codes and changing electoral boundaries over the years

Now that we have that out of the way…

Let’s look at the resale prices for constituencies which were held by different political parties between 2007 to 2019.

The Aljunied GRC consists of:

Who Holds the Constituency? (PAP → WP)

Formed back in 1988, Aljunied GRC has been held by the People’s Action Party (PAP).

Until the Workers’ Party’s historic win in 2011.

Which saw Mr George Yeo, then-Minister for Foreign Affairs, being ousted from office.

Aljunied GRC has been an opposition stronghold ever since.

It’s safe to say that the Aljunied GRC residents are pretty happy with WP at the helm.

HDB Property Price in Aljunied GRC Over the Years

For Aljunied GRC, I’ll be looking at Serangoon* town.

The Potong Pasir SMC consists of:

Who Holds the Constituency? (SDA → PAP)

From 2011 onwards, the SMC was won over and has been held by the PAP ever since.

HDB Property Price in Potong Pasir SMC Over the Years

GRCs and SMCs Which Have Remain With The Incumbent

And here’s a look at the resale prices for constituencies which were have been held by the same political party between 2007 to 2019.

Who Holds the Constituency? (PAP)

Considering that Tanjong Pagar GRC is where the late-Minister Mentor Lee Kuan Yew stood since his debut in 1955 until his passing in 2015.

It’s no surprise that the constituency has been held by PAP since the very beginning.

In fact, the PAP has enjoyed walkovers in its favour until GE2015.

When opposition party SingFirst, led by Mr Tan Jee Say, finally contested but couldn’t wrest control of the GRC from the incumbent.

As of GE2020, Tanjong Pagar continues to be held by PAP.

HDB Property Price in Tanjong Pagar GRC Over the Years

For Tanjong Pagar GRC, I’ll be looking at Queenstown town.

Who Holds the Constituency? (WP)

Ever since Workers’ Party won Hougang SMC in 1991, it has held onto the SMC ever since.

Making Hougang SMC one of the WP’s strongholds.

HDB Property Price in Hougang SMC Over the Years

For Hougang SMC, I’ll be looking at Hougang town.

So… What Are the Property Prices Across Constituencies Like Over the Years?

Now that we have all that info, let’s look at it in the form of a line graph:

And what do you know…

The median HDB resale prices all show an uptrend between 2007 to 2019.

No matter which constituency or town you bought your 4-Room HDB flat in.

Logically, you can infer that property prices are not influenced by whether it is in a PAP or an opposition ward.

In fact, I went to plot out a couple of other towns in the GRCs and SMCs which I picked.

And the result was still the same.

Between 2007 to 2019, HDB resale prices generally saw an appreciation which was anywhere between 80 to 100 per cent.

If anything, I’d say that property prices in Singapore are largely driven by

In conclusion, the residents of Sengkang should be able to rest a little easier.

Knowing that Workers’ Party taking over People’s Action Party does NOT mean that the price and value of their properties will be affected.

And c’mon, since Singapore is so land-starved.

The only possible way that property prices in Singapore is going… is probably up.