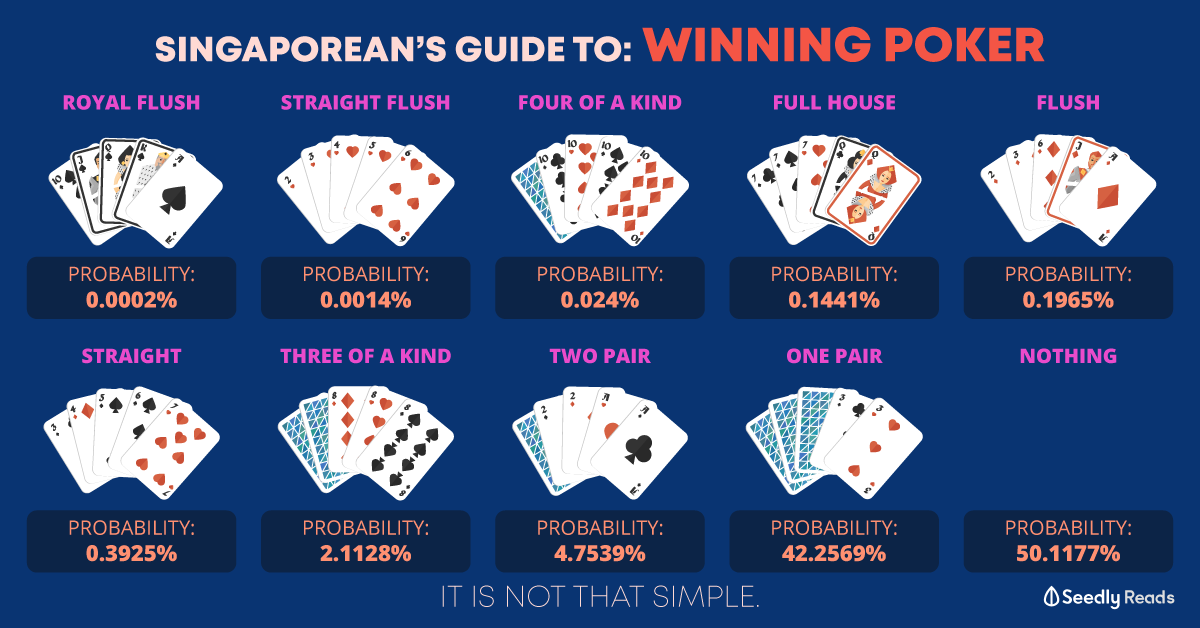 “Poker is a skill game pretending to be a chance game.” – James Altucher

By that, I am not referring to the unrealistic Stephen Chow’s God of Gamblers series where one can rub the cards to get Pocket Aces,

neither am I talking about our childhood hero, chocolate-eating Chow Yun Fat.

We talking about Poker Tournaments with millions of dollars at stake for World Series.

Having done my Math for Blackjack, TOTO and even 4D, I am naturally curious about some of the Math behind the game of Poker.

Of course, if you have a gambling problem, this is where you exit the article. This article explores the Math behind a game of Poker and we are not encouraging gambling!

An old piece of gambler’s wisdom will tell you to play the man, not the cards during the game of poker.

This means that by understanding your opponents on the table, you can manipulate them into calling or folding.

Probability and Odds of Poker Combinations

Understanding the odds of your hand and poker hands can help one make smarter decisions throughout the game too.

Here’s the probability of each of these poker hand:

Sorted out according to the biggest combination, there is only a 0.0002% chance of getting a Royal Flush.

Probability of Winning, Based on Your Hand

A research was done to break down the probability of winning, assuming each player is independent.

When playing against one opponent, the chance of winning when you have Pocket Aces (two Aces in your hand) is at 86%.

Below are some of the probability of winning, based on your hand. Suited refers to the two cards in your hand having the same suit (eg. Spades, Hearts, etc.)

When you increase the number of players to two opponents, the chance of winning when you have Pocket Aces (two Aces in your hand) drops to 75%.

With a game of Texas Hold’em poker usually being played by up to ten players, the number of players can have an impact on your probability of winning.

Number of Players vs Probability of Your Hand Winning

As seen from the above, with every additional player, the probability of you being met with a stronger hand increases.

For those who have never been invited to a Poker game, here are the basic rules of Texas Hold’em Poker.

In hold’em, each player

Your objective is to make the best five-card poker hand.

For anyone who thinks they can be the God of Gambler just by understanding some Math will be thoroughly disappointed.

As seen from the example above, the probability of you winning depends on not just luck, but also the number of players you are up against.

On top of that, there is a psychological aspect to every game of poker where your opponents may try to pull a bluff on you, despite you having a winning hand.

Instead of putting your money through this level of risk, and yourself through such level of stress, a better alternative will be to grab some Potato chips and Netflix.