Put Your CSI Skills To Use: How To Be a Private Investigator and Get a License for Cheap in Singapore
276
shares 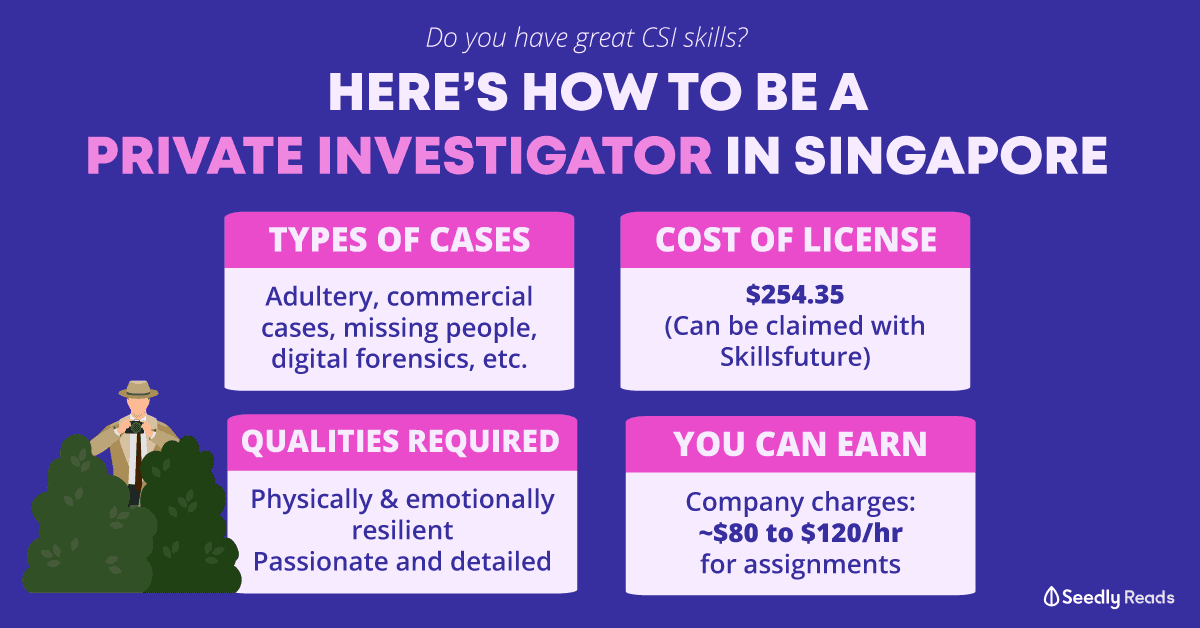 Put Your CSI Skills To Use: How To Be a Private Investigator and Get a License for Cheap in Singapore

Have you ever boasted to your friends after digging through the deepest trenches of the social media ocean to uncover details of someone with little online presence?

And then pat yourself on the back for your (self-proclaimed) outstanding CSI skills?

I know I have.

Which was why being a Private Investigator was something I’ve thought about when I was in school, thinking about how I could do something that I had an interest in and be paid for it.

Coupled with the fact that you could live your life like you’re in a drama, not as main leads but the one who stealthily collects details and watches the commotion from the side.

Sounds like a perfect job for one who wants to kaypoh but doesn’t want to be embroiled in any catfights.

What an unorthodox career choice, I know.

But given how recession-proof this career is, isn’t it worth considering?

If you’re one who’s getting tired of your job and looking for something exciting to eliminate those Monday blues, this is something to check out!

TL;DR: How To Be a Private Investigator and Get a License for Cheap in Singapore

What Does a Private Investigator Do?

In real life, a private investigator’s job is also heavily on research along with the action.

Prior to the start of an investigation, a private investigator would start with the preparation of the assignment.

This might include a discussion on the scope of the assignment, investigation log sheets preparation and logistical arrangements for the investigation activities.

Private investigators would conduct surveillance activities that are within legislative boundaries and fulfil the Investigation code of ethics.

A private investigator might be called to present collected evidence for official court proceedings and would be required to produce well-documented logsheets for facts and references.

Is Being a Private Investigator Considered Legalised Stalking?

We use the term ‘stalking‘ very loosely these days.

While we might associate this word with private investigators, there is a difference.

A stalker usually has an ulterior motive while private investigators do not have any intent at all.

Private investigators have to comply with legislative and regulatory requirements when carrying out investigation assignments.

They are also trained to apply appropriate observation techniques that ensure professionalism.

Also, a licensed private investigator is not allowed to solicit for services on his own.

Only the licensee of a Private Investigation Agency can advertise to provide private investigation services.

How Much It Costs To Become a Private Investigator in Singapore?

So how can you become a licensed private investigator in Singapore?

I was expecting it to be the certification pretty expensive and difficult to qualify as well (think Kingsman training style).

To my surprise, it was actually quite the opposite.

Firstly, you have to apply for a Private Investigation License under the Singapore Police Force.

This license would cost you a non-refundable processing fee of $16 with a validity of five years.

In order to qualify, an individual has to be Singapore Citizen or Singapore Permanent Resident, cannot be an undischarged bankrupt and cannot have any involvement in unlawful activities.

After this application, one has to go through a 40-hour course offered by NTUC LearningHub.

It is also fully claimable with our Skillsfuture credits!

You’ll also be awarded a Workforce Skills Qualifications (WSQ) certificate after the completion of this course.

Someone previously went through this course and stated that he paid $62 in total to become fully licensed, paying namely for:

Interesting how the license is cheaper than the photo taking.

Can You Dive Straight Into Being a Private Investigator After Attending the Course?

Does that mean you’re ready to become a full-fledged private investigator after doing those steps listed above?

While you’re licensed to put your CSI skills to use, you might need a bit of experience to be a good investigator.

Most of the skills acquired are usually from on-the-job training, as one experienced investigator mentioned that new private investigators are usually more jittery and would panic more in fear of being discovered.

This role also requires individuals to be physically and emotionally resilient.

One can expect long and irregular hours of work as it is possible to be activated anytime for assignments.

It’s also important to be emotionally resilient as this role entails tailing activities which might make you… question lots of things.

How Much You Can Earn as a Private Investigator

One of Singapore’s licensed private investigation agency, International Investigators mentioned that it charges an hourly rate of $80 to $120, with a minimum purchase of 10 hours ($800 to $1,200).

As cases rarely close within 10 hours, we can imagine the total costs to be eventually higher.

That’s the price of one private investigator, and would be doubled if two investigators are requested.

For cases that require the investigator to be overseas, rates are usually calculated by the number of nights.

Its total cost should include factors such as flight tickets, flight delays, country’s region and its riskiness – which would push the price higher.

Well, I guess it’s understandable given how it could get physically and mentally taxing.

Also, these rates are offered by the company to clients, and it is unknown what percentage of these fees the private investigator would actually get.

(We sure do hope it’s still an attractive sum!)

A private investigator does not seem to be a career choice that is considered by many these days.

But given how it is less susceptible to risks from economic downturns, it seems pretty attractive given its low barrier of entry as well.

Why not give it a shot?