Are You A Rational Investor?
49
shares 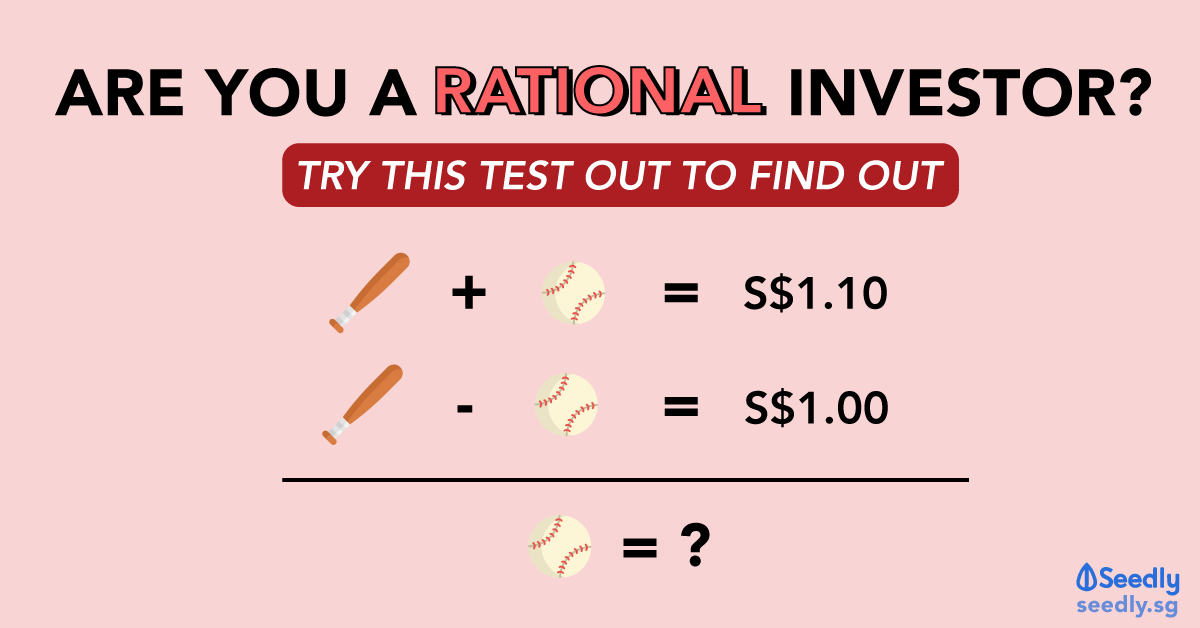 The name for the human species is Homo Sapiens, which means the wise man.

But over the last hundred years, psychological studies have found that we may not be that wise and rational.

In economics, man is assumed to be rational, selfish and consistent. However, we know that neither of these those assumptions is entirely true.

Psychology has also found out that we are not completely rational when it comes to investing. This has led to the branch of Behavioural Finance. However, my bet is that many of us want to be rational when we invest our money but are we capable of doing so?

Before we go any further, let’s try this question out.

A bat and a ball cost $1.10 in total. The bat costs a dollar more than the ball. How much does the ball cost?

If your answer to this question is $0.10, you are unfortunately wrong, but you are certainly not alone in giving such an answer.

In fact, almost more than 60% of students from MIT who sat through this experiment got it wrong as well! This means that incredibly smart students had also been wrong.

The correct answer to this question is $0.05. But the intuitive answer your mind most likely produced was $0.10.

This is a result of the two systems of thinking that we possess. According to psychologists, System 1 is the part of us that makes decisions in a quick, intuitive and unconscious way. This is how many of our decisions are made. This serves us well mostly, but System 1 is also responsible for some behavioural biases, and irrational decisions.

Conversely, System 2 is the part that makes slow, calculated and effortful decisions. System 2 is often associated with rationality, and we use it to make complex decisions.

Our System 1 thinking conjures up the answer “$0.10” intuitively. But to get to the correct answer of $0.05, we need our System 2 to make the actual mental calculations, which is much slower and more effortful.

From this, we can see that behavioural biases do exist, so it would be important to find out how these affect our decision making while investing.

Have you ever ordered too much food, regretted it, but still finished the food anyway because you didn’t want to waste it? I have, and I bet you have too.

This, unfortunately, may not be a rational decision, because we are committing the “sunk cost fallacy”. If you are already full from the meal, stuffing yourself with more food is only going to make you feel worse and unhealthy!

In this scenario, we should be making our decisions on possible future actions of how to deal with the extra food, rather than focusing on the fact that we had mistakenly ordered too much food to eat.

How can this be related to investing?

If we had a bad investment decision in the past, we could sometimes mull over it too much and choose to stick with it. We might say to ourselves, “I bought so much of X stock already, I might as well buy some more”.

Or we could say, “I have spent so much time studying this company that if I don’t buy their stocks, I might have wasted my time.”

Notice that the point of irrationality here is when the decision is based on what happened in the past, such as having already invested a lot of money, or time on an investment.

A more rational point of view could be, “I would also invest more in X stocks only if I think X company will perform well” or, “Even if I had spent so much time studying this company, I would only lose money if the company does badly”.

We, therefore, frame our decisions from what can happen in the future to avoid fixating on the past.

When I first started on a diet, I found it hard to imagine myself eating unhealthy food.

But soon after, when I was hungry and a plate of delicious char kway teow was in front of me, I gave in to temptation. While devouring the noodles, I found it hard to imagine myself avoiding unhealthy food — the complete opposite of what I had experienced previously.

Maybe you may have had a similar experience yourself, but this is a classic case of the empathy gap. This is a cognitive bias where people underestimate their emotional and mental states in different scenarios.

For example, we overestimate our ability to act properly in a stressful event when we are not stressed, or we struggle to understand why our spouse acted in a certain way when he or she was angry.

We always hear that we should buy low and sell high. When calm and rational, we think that this can be easily done. However, in a recession, we may act in a different way, and find it much harder to follow this advice.

The advice is known by many, but followed by few. There is a gap between our emotional states when we are in and out of a recession.

This question had been posed as a survey to many people before. The strange fact is that the majority of the respondents indicated that they were above-average drivers. This is a classic case of how everyone thinks they are better than the rest, which means that most of these people are wrong in their beliefs.

This sense of over-optimism and over-confidence bias seems to play a huge role in our lives. Several experiments have shown that we tend to believe that we have much more control and that situations are much rosier than they actually are.

Experiments have shown that individuals who had certain parts of their brains related to emotions impaired, were able to make much better rational decisions, and were not over-confident of their own abilities. Others have concluded that depressed people were more realistic, as they were less over-confident and over-optimistic in assessing situations.

How does this relate to investing?

Who doesn’t like confident investors? The folly of the over-confidence bias should remind us that we may be overestimating our abilities, as well as the situation around us.

We tend to associate confidence with superiority and good performance, which is why we find ourselves attracted to confident individuals. However, this bias for confidence may not be so helpful in the investing world.

Man may not be as rational as the economists might think.

Although we are biased, I suppose that it is just part of being human and that it’s alright to be biased. We can’t run away from our biases, but at least we can learn to identify them and find ways to cope with them.

I covered several biases in this article, but there are a few more biases which I think deserves our attention too. For investors, I think it would be crucial to know that we are under the spell of such biases. Stay tuned for the next part in this series!