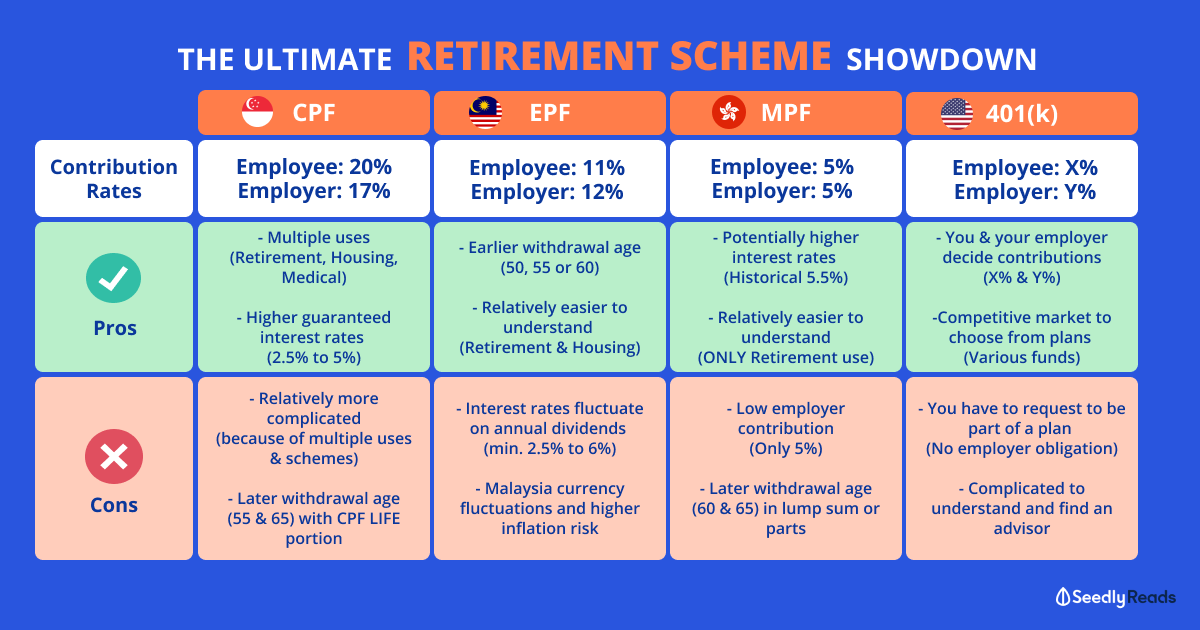 Many kopitiam uncles and taxi drivers have thrown a ton of criticism at Singapore’s Central Provident Fund (CPF) with regard to how it’s locking up our funds for far too long before we can even get a chance to touch it.

For the longest time, I’ve always been curious as to how our CPF stacks up against retirement schemes in countries like:

So I went online in search of answers, but I couldn’t find any concrete evidence that our retirement scheme is any better or worse.

By the way, this is #NOTSPONSORED. I’m just a curious citizen who is very concerned and involved when it comes to MY money – much like many of you who are reading right now.

TL;DR: Is Our CPF REALLY That Great?

In comparison with retirement schemes or provident funds around the world:

Why Do We Need A Retirement Scheme?

In the past, there was no such thing as government retirement schemes in this part of the world.

For our parents and grandparents, a retired person was supported by his or her family as well as whatever savings the individual has accrued through life. By that extension, an extended or really, really large family means you have a better safety net for your old age (read: more children to support you).

Life expectancy was also much lower as compared to today. A good example would be my grandmother, who had 8 children to support her financially until she passed away.

Planning For An Aging Population

As the world’s population age, most governments and states realised that there has to be a better way to provide for the ageing generation. Especially since the average lifespan has been increasing with better access to healthcare and medicine.

Not surprisingly, one of the most prudent ways to prepare for retirement would be to start when an individual starts working and contributing to society. Remember compound interest?

Here’s probably what the Singapore government was worried about when they came up with CPF:

So A Bunch Of Policymakers Walk Into A Room…

Yeah, that sounds like the beginning of a bad joke.

That aside, I decided to look at the following retirement schemes and plans to do a little comparison:

Don’t let the name ‘401k’ throw you off, all four schemes are pretty much the same thing: they’re all provident funds.

In case you’re wondering what ‘provident’ is, it means “indicative of timely preparation for the future”.

Simply put, a provident fund is a plan that prepares you for your future (aka retirement).

Similarities Among All Four Plans

After reading the information available on all four websites, I discovered that all four plans:

So… What’s The Difference Between All Four Plans?

Here’s a simple all-in-one chart which details a comparison of the retirement plans from all four countries.

You Can’t Have Your Cake And Eat It Too

When I walked into HDB Hub to make a downpayment for my HDB BTO using my CPF OA, I was really grateful (on hindsight) because, in some sense, my employer was partially funding my purchase.

This is due to the 17% employers’ contribution to my CPF Ordinary Account monthly, on top of my 20% employee’s contribution.

If we compare this to Hong Kong, which only has 5% contributions from employees and employers, and skyrocketing land price. It is a country where young adults are unable to afford a roof above their heads.

And that’s a situation I would not want to be in: with little to no retirement funds, and no place to call home.

How Do YOU Think CPF Can Be Improved?

If you’ve made it this far in the article, then like me, you’re probably pretty vested in this country’s retirement system and safety net for the ageing population.

Coincidentally, we’re meeting the CPF team next week for a sharing session over dinner and it would be a good opportunity to give them some feedback on how the system can be improved.

If you have any thoughts or improvements to CPF that you would like to see being implemented, share it with us and we’ll be sure to bring it up to them during our discussion.

If you’d like to find out more about the retirement schemes of the various countries, here’re a couple of links to relevant information which you might like to check out.