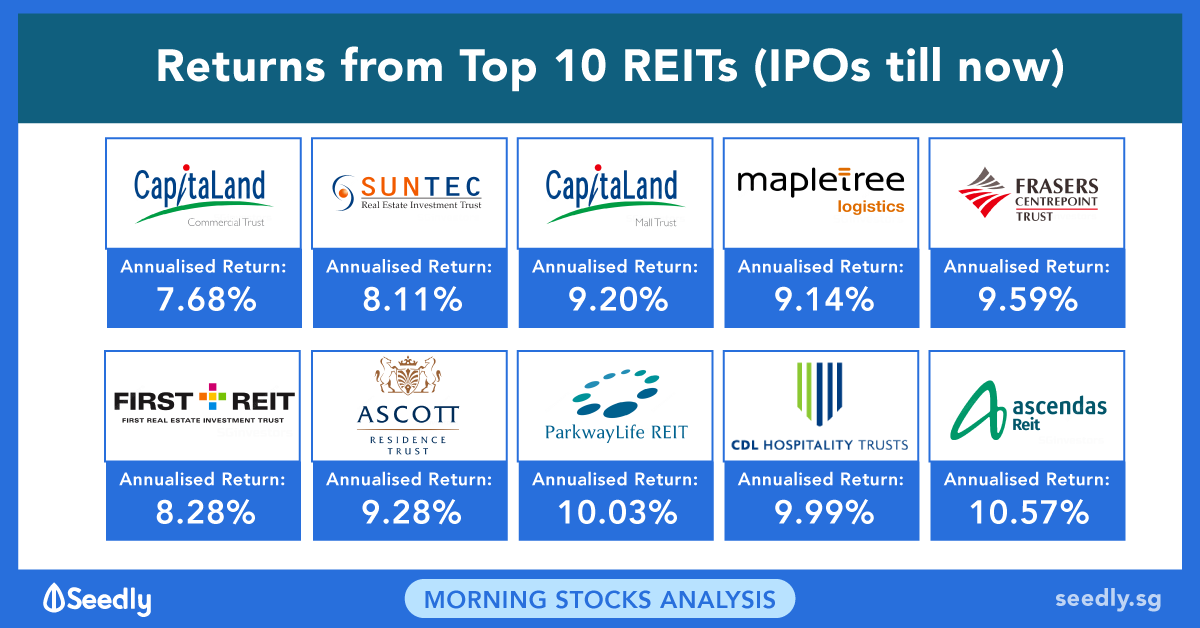 In early 2017, Sabana REIT has been getting a lot of attention when a small group of unitholders moved to kick out the manager for delivering poor performance since its IPO in 2010. Early investors who bought Sabana at an IPO price of S$1.05 are now sitting on huge losses – Sabana last traded at just 41.5 cents per share at time of writing.

If we look at history, Sabana REIT isn’t alone. There are several other Singapore REITs (S-REITs) like Saizen REIT, MacarthurCook Industrial REIT and Allco REIT that have run into trouble before and caused a dent in Singapore’s REIT sector. Despite some casualties, Singapore’s REIT market remains vibrant – largely thanks to the majority of S-REITs that continue to deliver good results to income investors.

In this article, we look at the performance of Singapore REITs with a listing history of at least 10 years. We’ll take into account the latest share prices as at 31 Jan 2019 and dividends paid out to unitholders up to end-2018. We also made several adjustments such as pre-consolidation shares and dividends to get a more precise and accurate picture.

There are 19 Singapore REITs that IPOed in 2007 or earlier but Saizen REIT will be excluded since its underlying assets were fully divested in 2016 and delisted a year later.

Again, we assume that John (a fictional character) invests $1,000 in each of these REITs equally from the day the REIT listed. Since John is a hard-core income investor and wants to keep all his cash, he doesn’t want to come out with any money to subscribe to rights issuances (if any) and is prepared for any share dilution. Let’s also assume that John also forgets to sell his nil-paid rights from which he can make a profit from.

From the table above, John would’ve made a nice return in CCT as his initial investment of $1,000 would have grown to $3,040, including the dividends received over the years. If John invested $10,000, then his investment would’ve grown to $30,400. Basically, the more money he invests, the more he is going to make. And the longer he holds, the more dividends he is going to receive. In all, his annualised return from CCT alone is 7.7% from May 2004 to Jan 2019 — much better than the interest you can earn from the bank!

Though John has his wins, he also made a few mistakes and he lost money in LMIR Trust, Allco REIT, MacarthurCook Industrial REIT, and Saizen REIT. Thankfully he diversified his portfolio as it is never a good idea to put all your money in one single stock. So those losses are certainly not going to keep him awake at night. After all, his gains in those 15 Singapore REITs would be more than enough to cover the losses and still leave him with excess profit.

On top of that, John is still very profitable without having to come out with any additional capital to subscribe to any rights. However, if he had subscribed to them (including excess rights), he would have made more money since rights are usually sold at a discount. At the end of the day, John continues to receive regular quarterly dividends from his Singapore REITs in good times and in bad.

As you can see, REITs remain a good choice for anyone who wants to build a steady and consistent stream of passive income. However, please note that you shouldn’t buy or avoid a REIT just based on the data above as past performance is not necessarily indicative of future results.

It’s highly important to have a proper investment process to help you identify and invest in the right REITs that will give you capital gains and a continual stream of passive income down the road.