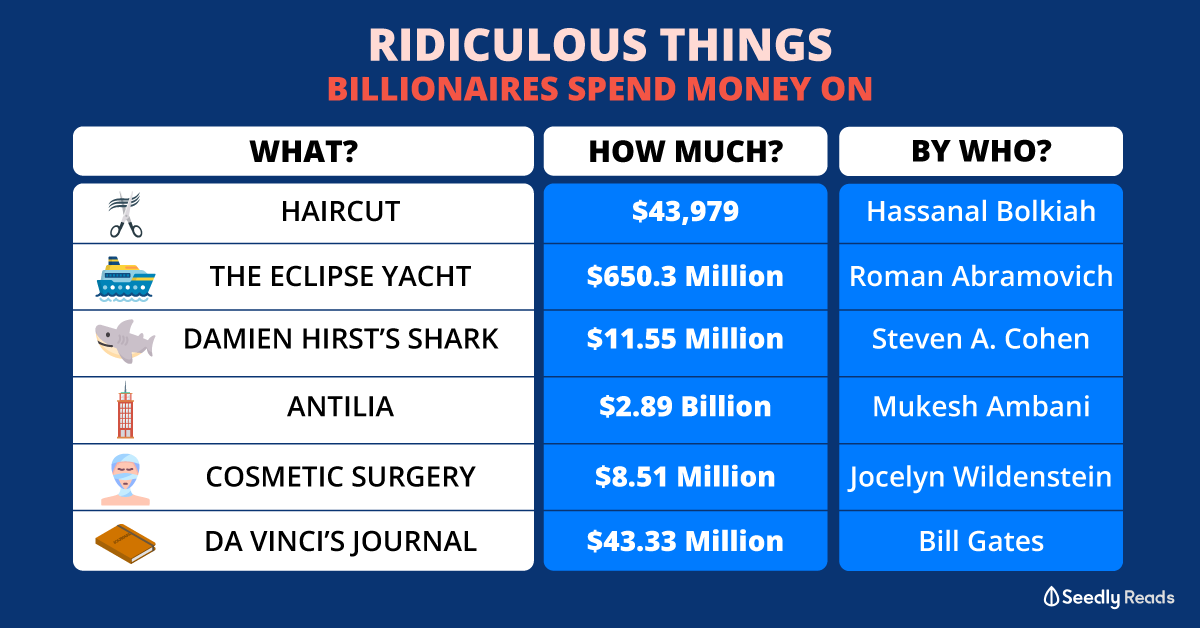 Ever wondered how many billionaires are there in total around the world?

According to the Forbes list of the world’s billionaires compiled in the year 2019, there is a total of 2,153 billionaires in the world.

These 2,153 individuals have a total net wealth of US$8.7 trillion (S$12.63 trillion). The total amount of global wealth in the year 2019? US$360 trillion (S$522.54 trillion), according to the Global Wealth Report by Credit Suisse Research Institute.

To put things into perspective:

What Does It Mean to Be a Billionaire?

If you are wondering how much is a billion, one billion is a thousand million.

A billionaire is a person with a net worth of at least one billion, usually measured in major currencies such as the United States dollar.

” Just chilling with my bottles once a week.”

I once randomly did a calculation of a billionaire heading to a club like CÉ LA VI to purchase their most premium package at $1,488 once a week, he can do so for about 12,924 years!

But well, 12,924 years of weekly party experience is not the most ridiculous thing that billionaire buys when you compare it to the list we are going to present you with.

Imagine spending more than half a year’s salary on a haircut.

Back in the year 2009, Haji Hassanal Bolkiah, the Sultan of Brunei had a £15,000 (S$25,358) haircut. As the haircut was during the period of time where swine flu was widely spread, he spent S$18,621 for a private luxury cabin to fly his barber down. This is to ensure that his barber does not mix with other passengers.

Still on Hassanal Bolkiah, of his collection of 7,000 cars, he owns a 24-Carat Gold-Plated Rolls-Royce which is estimated to cost US$14 million (S$20.23 million). The Rolls-Royce was used on his wedding day.

Antilia is a 27-storey skyscraper located in Mumbai. The construction took seven years and cost US$2 Billion (S$2.89 Billion) in total.

The building requires a staff of 600 to maintain and it includes a private movie theatre, swimming pool, fitness centre and three helipads. It is one of the world’s most extravagant house, and it houses the family members of Mukesh Ambani, the richest man in India.

If you are keen on the floorplan of the Antilia.

The price he paid for, for the entire football club is only a fraction of what he paid for his Yacht. The Eclipse Yacht costs close to S$650.30 million, and it is the second-largest private yacht in the world.

Spending millions on someone’s journal seems absurd until we realised the owner of the journal.

Bill Gates paid S$43.33 million on Leonardo da Vinci’s journal. Now we wonder if Bill Gates got some of his ideas from reading the journal.

Steven A. Cohen is an American billionaire hedge fund manager. As an avid art collector, one of his extravagant purchase is the Damien Hirst’s Shark which is a 14-foot tiger shark preserved in formaldehyde in a vitrine.

Her extensive cosmetic surgeries to her face end up backfiring on her, as she earned herself nicknames such as Catwoman, The Bride of Wildenstein, etc. What has she done?

Larry Ellison, the founder of Oracle, spent US$300 million (S$433.58 million) to buy the entire Hawaiian Island of Lanai. The 90,000 acres island comprises of resorts and towns.