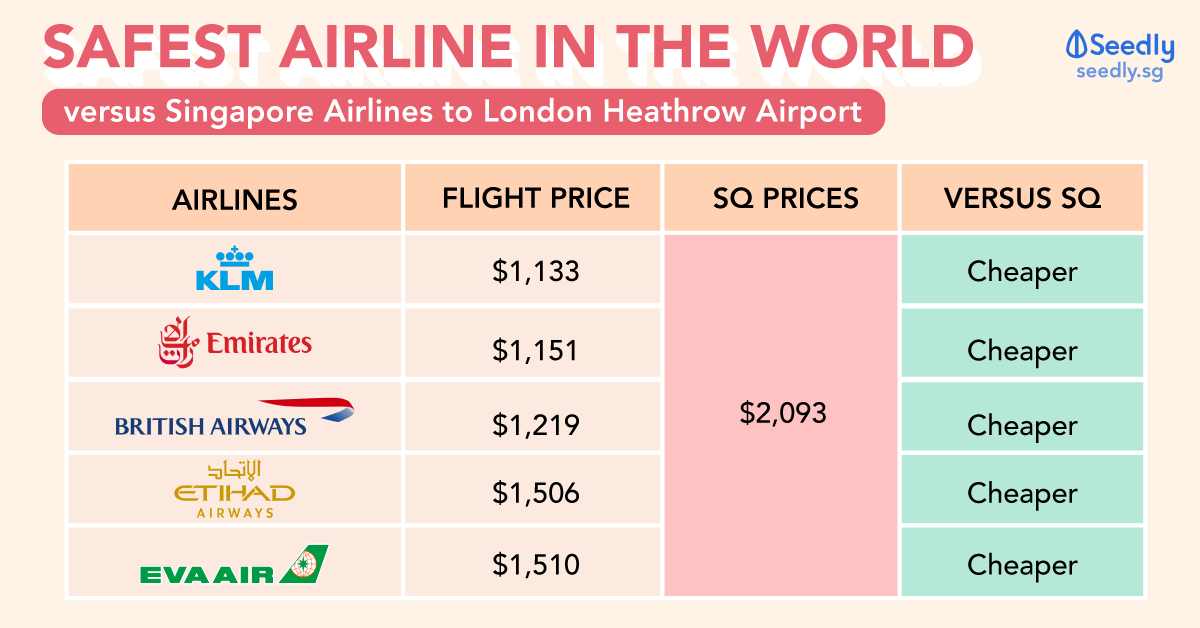 When choosing an airline to travel with, there are usually a few things that we take note of,

One usually takes precedence over the other. A friend of mine told me, no matter how cheap the flight tickets for Malaysia Airlines are, she would never fly with them.

Another told me that she would gladly pick Malaysia Airlines over anyone else because they have really cheap and the flights are usually empty (plus, you get the entire row to yourself sometimes!).

AirlineRatings.com had released the list for the top 20 safest airlines earlier this year, here is the list (in alphabetical order):

Out of 20, 6 of which (that I have strike off) do not fly into Singapore Changi Airport.

Though there are other cheaper alternatives like Scoot or Jetstar Asia that offers you a fraction of a price (sometimes) to fly to your destination.

But we are here to see how big of a price tag do the top 20 safest airlines carry.

You can search for cheaper alternatives with service providers out there that would gladly help you such as Skyscanner.

How much does it cost to fly to their respective country of origin?
(Versus our very own Singapore Airlines)

Well, it is evidently cheaper to fly with the respective country’s airlines that you are travelling to. Well, almost all except to Hong Kong. And it’s safe too.

Singapore Airlines do have their sale periods which drops the ticket prices quite a bit, I flew to Melbourne last year with SIA for about S$601. More than 50% off the original price!

How about flying to London Heathrow Airport?

BONG. BONG. BONG. How about a popular destination especially for long-haul flights? Like London?

Would it be cheaper to fly there using the other airlines or Singapore Airlines?

Note: Table is arranged in ascending order (Cheapest to most expensive)

Every other airline is cheaper than Singapore Airline except Cathay Pacific. But for some, they might choose to stick with Singapore Airlines for its convenience and to collect KrisFlyer miles! Which group are you in?

Let us know below!

Missing out on the Big Ben action as it is under renovation? I have been following this twitter account since my secondary school days and they are still at it, honestly never fail to crack me up EVERY TIME.

Safest Low-cost Airline in the World

Information that you might come in handy in the future, most of them don’t fly into Singapore Changi Airport.