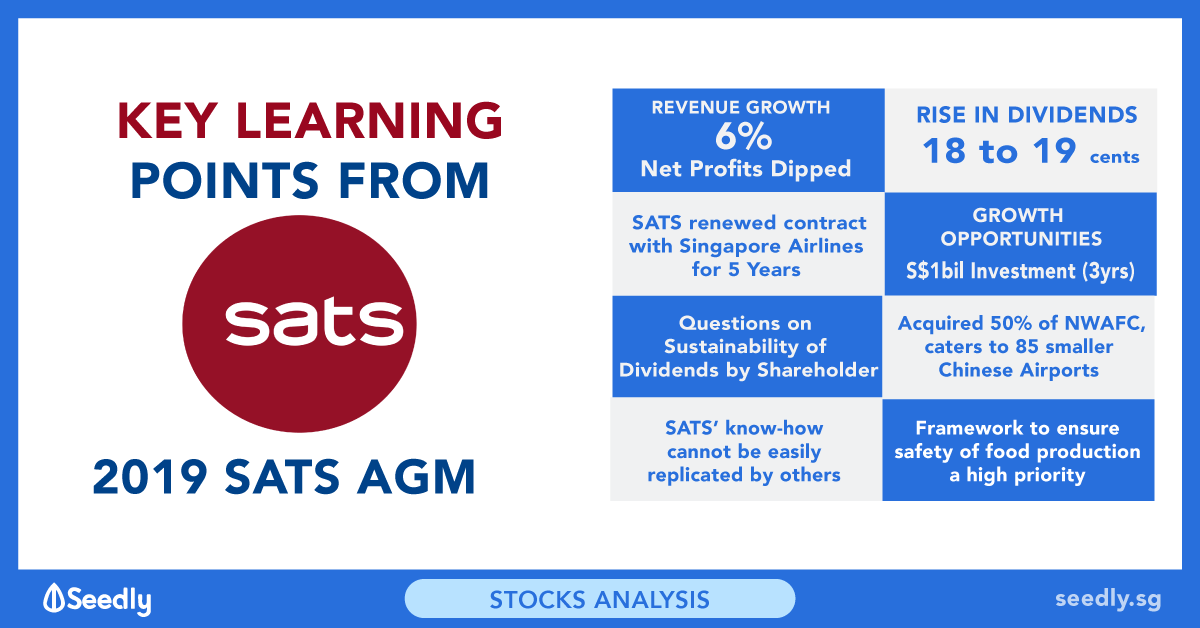 SATS (SGX: S58) is a food and logistics company that is best known for managing most of the ground-handling services and in-flight catering at Singapore’s Changi Airport. Due to the recurring nature of the business, SATS’ financial performance has been remarkably stable. In fact, SATS’ operating profit actually grew during the last financial crisis, from S$153 million in 2007 to S$170 million in 2009.

Despite this, SATS seems to be facing some challenges on the growth front in recent years — revenues have grown just 8% over the past three years. While earnings have grown over the same period due to increased efficiency, revenues will ultimately need to grow if the company is to earn more over time. Hence, I attended SATS’ 2019 AGM to find out more about the company’s growth plans.

Here are eight things I learned from the 2019 SATS AGM:

1. Revenues grew 6% from S$1.73 billion in fiscal year 2018 to S$1.83 billion in fiscal year 2019, while net profits dipped from S$261 million to S$248 million. However, these results need to be adjusted for a more accurate picture of SATS’ current-year growth. In fiscal 2018, SATS sold a 51% stake in its subsidiary SATS HK. Excluding the impact of this deconsolidation, revenues would have increased by 7% instead of 6%.

Additionally, fiscal 2018 and 2019 profits benefitted from one-off gains of S$25.4 million and S$7 million respectively from the disposal of assets. Excluding the impact of these non-recurring gains, profits would have increased 2.2%.

3. SATS has renewed its longstanding ground handling contract with key customer Singapore Airlines for another five years. The contract, which was announced in April, contains an option to extend the agreement for another five years. In his prepared remarks, CEO Alexander Hungate noted that this contract has a much longer term than previous contracts. With the contract in hand, SATS is preparing to step up investments in order to improve existing technological infrastructure and processes at Changi Airport.

4. The CEO unveiled a plan to invest S$1 billion in growth opportunities over the next three years. This figure is nearly double the S$529 million that SATS has invested in capital expenditures and acquisitions over the past three years. The company has a number of broad priorities when it comes to deploying this capital. First, it is aiming to expand its central kitchen capacity in key Asian markets such as China and India. In addition, it is aiming to consolidate its market-leading position in the highly fragmented flight catering and ground handling markets. Lastly, it intends to improve customer experience by developing its digital capabilities.

5. A shareholder asked if the dividend was sustainable in light of the planned increase in investment. Chairman Euleen Goh replied saying that the board has always desired to pay a dividend that is ‘sustainable year-on-year, that [shareholders] can look to reliably’. However, the board may prioritize an investment over its dividend payout if it determines that the investment opportunity is a far more effective use of capital.

6. The same shareholder asked about the company’s plans to scale up in the fast-growing China market. According to the CEO, the company already has a presence in four large Chinese airports: the Beijing, Daxing, Tianjin, and Shenyang airports. However, a number of state-owned enterprises already operate at those airports, making it very difficult to further penetrate the market without a relationship with the incumbents. To get around this issue, SATS recently acquired a 50% stake in Nanjing Weizhou Airline Food Company (NWAFC) for S$31.2 million. NWAFC is an independent caterer that serves 85 smaller Chinese airports. These smaller airports are usually served by an independent caterer as they do not have in-house food catering capabilities. Besides the aviation catering space, the company will also pursue the food catering market in China. The CEO believes that SATS’ strong safety record and research capabilities will enable it to benefit from the rapid growth in this market.

7. Another shareholder asked if the company had taken steps to prevent its know-how from leaking into the hands of overseas partners. The chairman replied that SATS’ know-how cannot be easily replicated by others because this know-how lies with its people. SATS has flourished over the years because it has built a team that works effectively towards producing food that is consistently reliable and safe. SATS maintains this expertise by focusing on creating a culture that is based on values such as serving with passion and sharing a common purpose.

Why not check out Seedly’s QnA and participate in the lively discussion surrounding stocks like (SGX: S58) and many more!