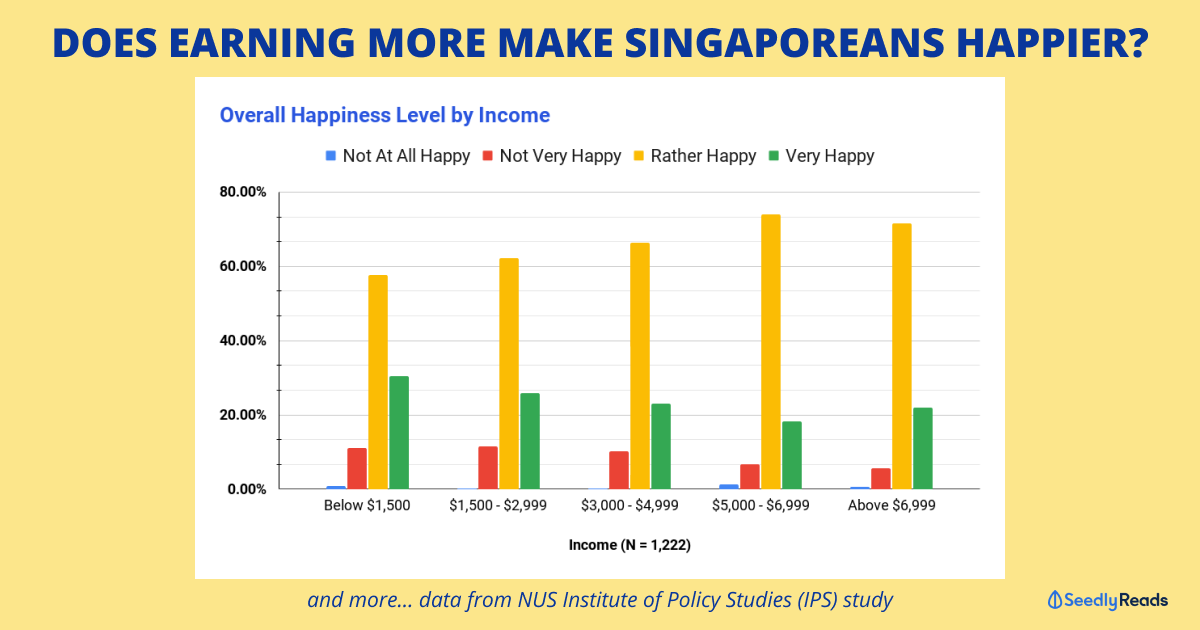 Just the other day, I came across this study from the Lee Kuan Yew School of Public Policy Institute of Policy Studies (IPS) entitled Lived Experiences in Singapore: Key Findings From The World Values Survey on our Seedly community Facebook page.

The study is the third episode of a three-part series that studies the lived experience of Singapore resident respondents and provides insight on what ‘motivates and sustains our attitudes and values.’

Naturally, as a personal finance writer, I zeroed in on the section about happiness and satisfaction in relation to income.

Here is what I learnt about income and happiness from the study that I hope you will find helpful.

Here is how the data for this study was put together:

Data for this report is primarily derived from the latest 2020 Singapore instalment of the World Values Survey (WVS). Data collection for this instalment took place from November 2019 to March 2020 and was conducted by IPS Social Lab. In total, 2,012 Singaporean residents participated in the survey.

At the outset, a sample frame comprising a list of 3,000 randomly generated household addresses was obtained from the Singapore Department of Statistics (DoS). There was a reasonable response rate for this iteration of the WVS survey; approximately two-thirds of those eligible to complete the study did so.

The overall responses for each question reported in the ensuing chapters are weighted to ensure that the WVS sample’s demographic proportions closely approximate those of the national population in terms of age cohort, gender, and race. This enables us to effectively compare results across different iterations of the survey, and provide a general gauge of the overall population’s value systems.

As such, the findings are representative of the Singapore adult resident population.

To add, it would be nigh impossible to interview the entire Singapore adult resident population. As such, this statistically significant sample is as good as it gets.

From the survey, you can see that the higher income earners are more likely to be Rather Happy or Very Happy in comparison to those who earn less.

But although those in the highest income bracket seem to be happiest judging from the combined Rather Happy and Very Happy responses, the happiness seems to taper off a little at the top.

This corroborates the findings in the article I wrote about millionaires in Singapore. 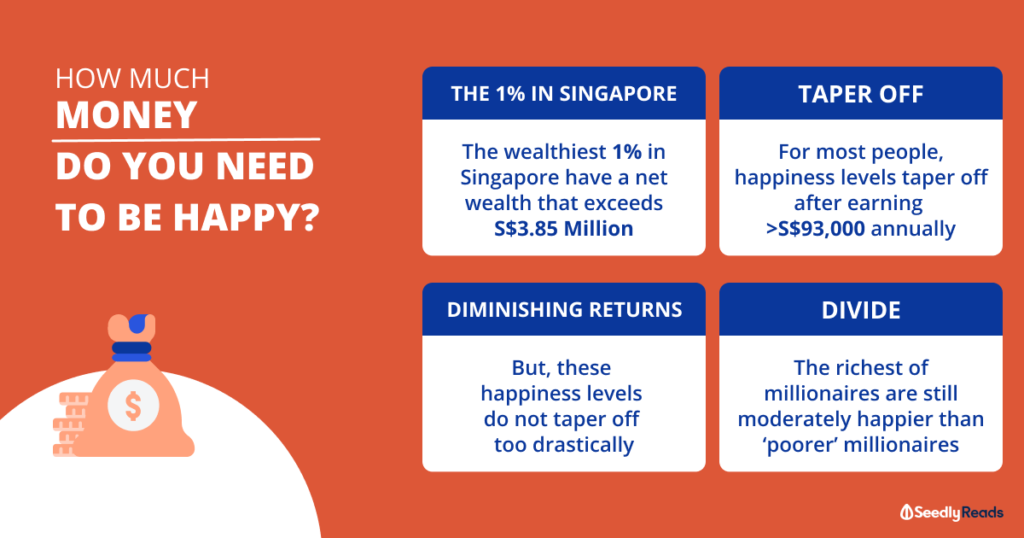 Although no single piece of research can answer this question definitively, this 2018 study published by Purdue University in the field of happiness research will be quite helpful.

The researchers analysed data from the Gallup World Poll survey where a representative sample of over 1.7 million individuals from 164 countries was surveyed.

FYI: This question is actually called the Cantril’s Self-Anchoring Striving Scale and is considered a more accurate and holistic method to measure happiness/subjective well-being/life satisfaction.

The researchers then studied the correlation between the Cantril ladder score and each individual’s income and found that no matter which part of the world you are from; people who earned more tend to be happier.

However, the researchers also found that there was an income satiation point.

As part of Southeast Asia, the income satiation point for the average person in Singapore is an annual income of ~S$93,000 (US$70,000).

This means that when people earned more than $93,000 (above the $6,999 income bracket), their happiness levels tapered off.

This could possibly be the case where any increase in income beyond this income satiation point does not have too great an effect on the person’s ability to lead a comfortable life.

In other words for the average person, more income increases overall life satisfaction but with diminishing marginal returns.

This research is all well and good but something from there struck me.

Undoubtedly, their lives would not be easy in Singapore due to the high cost of living here.

But you may be wondering, why are they still so happy when they do not earn as much.

This 2018 study was that was published in the journal Emotion may shed some light on why this is the case.

The researchers for the study assistant professor of psychology and social behaviour at the University of California (UC) Irvine Paul K. Piff and then UC Irvine graduate student Jake P. Moskowitz interviewed over 1,500 Americans aged 24 to 93 for their research.

What their research suggests is that people who are in the lower-income brackets are happy as they tend to treasure their relationships more and take pleasure in connecting and caring for others.

In my opinion this is a form of riches money can’t buy.

Whereas for those in the higher income brackets, the positive emotions that they experience tend to revolve around greater self-oriented feelings of contentment and pride.

People who are poorer are more reliant on others to get by and ‘They really prioritize relationships because of their reduced resources, and so they are more likely to really focus on emotions that bind them to one another and find satisfaction and delight in relationships through compassion and love.

At the risk of sounding preachy, I would think that this quote from former National Football League Player (NFL) player Ralph Fulsom Marston says it best for me.

I’m not downplaying your circumstances or the problems that you are facing.

But I believe that at the end of the day, you are responsible for your own happiness.