Why Netflix Scares Me As An Investor 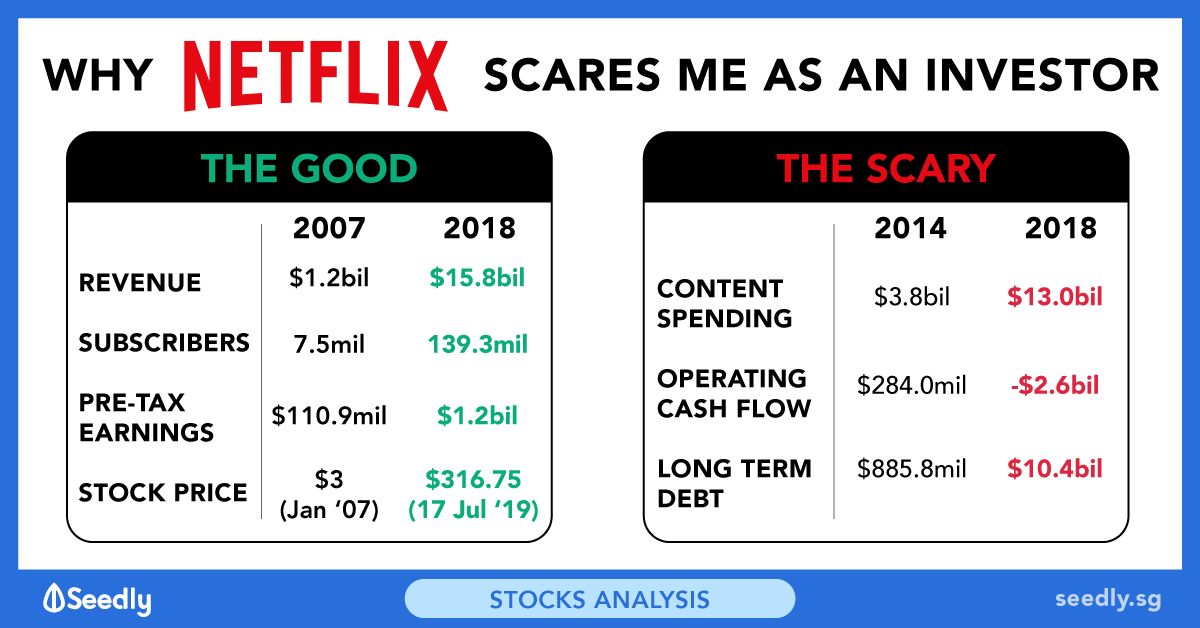 Why Netflix Scares Me As An Investor

Don’t we all adore Netflix? For a small monthly fee, I get to ‘Netflix and chill’, watch episode after episode of Stranger Things until I start to grow roots. Just for that moment, I become the most resilient plant in the house, going hours on end without food, drink, or sunlight.

Once, as I emerged from my cave looking like a scruffy hobo from yet another Netflix binge, I thought to myself: ‘Is Netflix as alluring of an investment as its TV blockbusters?’

Well, let’s have a look at the company together. Netflix (NASDAQ: NFLX) was founded in 1997. The company started as an online DVD rental service, mailing your favourite selection of movies right to your doorstep. It was a revolutionary idea, considering its competitors at that time – Blockbuster and Redbox – were renting DVDs through stores or vending machines spread around the country.

In 2007, Netflix disrupted its own industry with the introduction of Over-The-Top (OTT) video streaming. An online platform for you to catch all your favourite movies and TV shows all in one place. People loved it. As a result, Netflix’s revenue soared from US$1.2 billion in 2007 to US$15.8 billion in 2018:

Compared to its revenue, Netflix’s pre-tax earnings are more volatile due to fluctuations in operating cost and interest expense. However, it’s still impressive nonetheless, growing at an annualised rate of 24% from US$110.9 million in 2007 to US$1.2 billion in 2018:

However, just focusing on Netflix’s performance metrics such as profit and subscriber growth right now could get you into trouble. These numbers alone do not tell you the full story of what potentially lies ahead for the company.

It’s Getting Crowded In Here…

While Netflix is hailed as the catalyst that single-handedly launched the OTT industry into the mainstream, the business landscape is quickly changing.

Right now, 63% of Netflix’s video library is made up of third-party licensed content that Netflix subscribers spend almost three-quarters of their time watching. But some of this content is moving away from Netflix as Disney, Amazon, HBO, CBS, NBC, and many others have already started or are aiming to launch their own OTT services. And they plan to take their content along with them. The pending licence expiry of shows like The Office and Friends – the two most popular titles on Netflix in 2018 respectively – is going to leave a hole for Netflix to fill.

The exodus of ‘anchor shows’ has spurred Netflix to spend more on original productions – Stranger Things, The Crown, Daredevil, and Narcos – which require a lot of upfront capital expenditure. This has caused Netflix’s overall content spending to accelerate over the past four years, from US$3.8 billion in 2014 to US$13.0 billion in 2018:

The average cost of production per episode has doubled to US$8 million as television studios spend heavily on exotic filming locations, special effects, and top-of-the-line cast.

Inclusive of marketing, an entire season could easily cost more than US$150 million – roughly the cost of putting a box office hit like Spider-man: Far From Home in theatres. The quest to hunt for the next Game of Thrones is a costly affair.

As a result, the company’s operating cash flow has plunged into negative territory over the past four years:

More worryingly, this cash burn is funded through borrowings – Netflix’s total long-term debt has ballooned from US$885.8 million in 2014 to US$10.4 billion in 2018:

And this spending is not going to slow down anytime soon. As of 31 December 2018, Netflix has total streaming content obligations of US$19.3 billion. This includes non-cancellable obligations for the production of original content and agreements to license future third-party content:

Of this amount, US$8.4 billion is currently reflected on the balance sheet as liabilities and the remaining US$10.8 billion is kept off the books. Once a show becomes available, the obligation is then moved onto the balance sheet as a content liability which is then amortised accordingly. (Notice also that although Netflix’s total debt is US$10.3 billion, its total debt obligations including interest is US$14.9 billion.)

Netflix argues that, given the low-interest rates, financing growth through the debt market is currently more efficient than issuing equity. But the chickens will have to come home to roost one day. The only way Netflix can afford to keep this going is to continue growing its subscriber base and raise subscriptions fees until revenue growth tips the scale, so the company can eventually pay down its debt. However, if subscriber growth starts to slow or decline drastically, then Netflix could collapse like a House of Cards.

And that future may not be that far away. The OTT space is becoming increasingly crowded with different platforms battling it out over price and content exclusivity. And we, the subscribers, will have to make a hard decision on which shows we really want to watch. Because if you want to view…

Catching all your favourite shows could mean subscribing to 4-5 different OTT providers and paying more than US$50-70 a month, about the price of cable television right now – the total opposite of why we signed up for Netflix in the first place.

Consumers would soon suffer from subscription fatigue and could decide to turn to less-than-legal sources to catch their favourite shows. Traffic on file-sharing websites is on the rise again after many years of decline as the mounting costs of keeping up with exclusive content drives consumers toward piracy.

Netflix is caught in a very difficult position. On one end, subscribers will start to question its value proposition – whether Netflix is able to produce enough quality original content to replace the loss of popular licensed third-party titles over the next few years. On the other end, Netflix is unable to raise its subscription fees when deep-pocketed competitors like Disney are charging half the price for its library of stellar content.

As much as I enjoy Netflix as a consumer, as an investor it’s probably better to watch from the sidelines and see how this story plays out. The OTT wars have just begun with no endgame in sight. Time to grab some popcorn.

Why not check out Seedly’s QnA and participate in the lively discussion surrounding stocks like Netflix and many more!