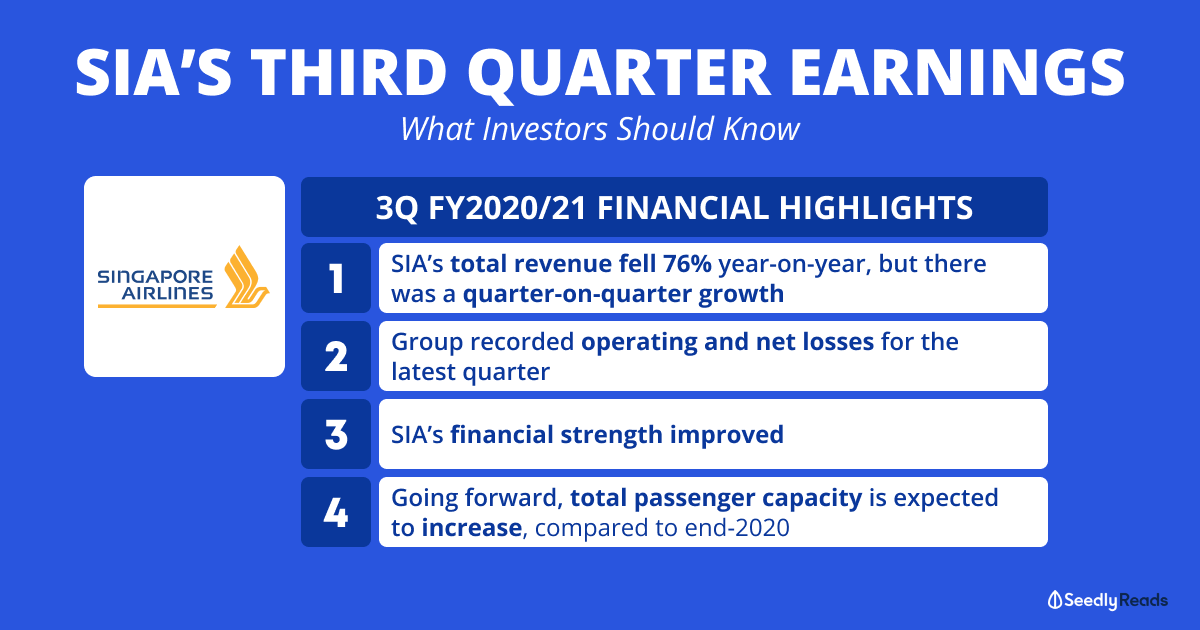 SIA has been battered by the COVID-19 pandemic, with government-imposed travel restrictions and border controls around the world impacting the group.

Are there any bright spots emerging after more than a year since Singapore saw its first case?

Discuss Your Thoughts on SIA With Fellow Investors Right Here!

How Much Did SIA Make for the Latest Period?

The fall was due to three passenger airlines within the SIA group — SIA, SilkAir, and Scoot — reporting a sharp drop in passenger flown revenue due to low traffic brought about by COVID-19.

However, improvements in cargo flown revenue slightly offset the decline. There was continued strong demand for pharmaceutical and e-commerce shipments and an uptick in general cargo demand.

The decline was largely due to lower non-fuel expenditure on the back of cost-saving initiatives such as capacity cuts, staff-related measures, and government support schemes.

With that, SIA recorded an operating loss of S$330.8 million and a net loss of S$141.8 million for the latest quarter.

But the latest results are an improvement from the deeper losses seen in 2Q FY2020/21.

From SIA’s third-quarter results, it looks to me like the worst is over for the group.

How Strong Is SIA’s Balance Sheet?

This shows that SIA’s balance sheet has strengthened over the nine-month period.

Debt-to-equity ratio, which also measures financial strength, improved from 1.27x to 0.78x over the same period.

SIA still has the option to raise up to S$6.2 billion in additional mandatory convertible bonds before its annual general meeting (AGM) in July 2021.

It also has access to over S$2.1 billion in committed credit lines. SIA said that “these liquidity measures will allow the Group to be in a position of strength as it emerges from this crisis”.

With the onset of the pandemic last year, SIA slashed its passenger capacity.

However, with the improving situation, the group has gradually increased passenger capacity.

Based on its current schedules, the total passenger capacity is expected to be at around 25% of pre-COVID levels, as of end-April 2021, up from 19% at end-2020.

SIA Cargo delivered the first shipment of COVID-19 vaccines to Singapore on 21 December 2020, which was also the first to Asia.

Going forward, as the production of COVID-19 vaccine ramps up, SIA’s cargo arm is looking to capture its share of the traffic to Asia and the Southwest Pacific region.

Why not check out our community at Seedly and participate in the discussion surrounding stocks like Singapore Airlines (SGX: C6L) and many more!

What Are Your Thoughts on SIA?