How Worried Should You be About Singapore's $64.9 Billion Budget Deficit in FY2020?

How Worried Should You be About Singapore's $64.9 Billion Budget Deficit in FY2020?

If Singapore were a person, I would objectively say that Singapore is someone who is rather financially savvy.

Instead of spending impulsively on frivolous wants and racking up huge debts, Singapore has long been fiscally prudent, accumulating budget surpluses for most years.

Don’t just take my word for it. Singapore has the highest possible AAA credit rating (Aaa rating for Moody’s) from international agencies like Standard & Poor’s, Fitch, and Rating and Investment Information (R&I).

This financial prudence is even written into our constitution, which requires Singapore to maintain a balanced budget over a typical five-year government term.

For the past few electoral cycles, the Singapore government has maintained budget surpluses which grants it the ability to roll out bigger budgets in subsequent years.

Think of it as an emergency fund of sorts but on the national level. Thankfully there was no pressing need to use this ’emergency fund’ until recently.

When the COVID-19 pandemic broke out, it struck a severe blow to economies all around the world, inducing one of the steepest recessions in its history.

In fact, the Ministry of Trade and Industry (MTI) announced today that the Singapore economy contracted by 5.4 per cent in 2020.

To cushion the economic fallout from COVID-19, the government rolled out the Singapore Budget 2020, Resilience Budget 2020, Solidarity Budget 2020 and Fortitude Budget 2020 to the tune of about $92.9 billion in total; or 19.2 per cent of Singapore’s Gross Domestic Product (GDP).

And, as Deputy Prime Minister Heng Swee Keat announced at the Singapore Budget 2021 speech, Singapore’s overall budget deficit for FY2020 is expected to be about $64.9 billion, or 13.9 per cent of its GDP and the largest since its independence.

As such, $52 billion was drawn from Singapore’s pool of undisclosed reserves. But, only $42.7 billion was utilised, with $9.3 billion not expected to be used in FY2020.

What does this all mean? Should you be concerned as an everyday Singaporean?

What Is Singapore’s Budget Deficit in 2021?

As the current government was elected last year in July 2020 at the Singapore General Election 2020, this year’s Singapore Budget 2021 or the ‘Emerging Stronger Together (EST)’ Budget 2021 will be its first budget.

As things go, it is likely that the current government will start this year with a rare budget deficit.

This is unfamiliar territory as in the past, the government will usually have a large budget surplus for the first year of its new term.

This year’s EST budget will offer more targeted support to facilitate Singapore’s economic recovery and help it rebound from its worst recession since independence.

Read more about the EST budget and the $11 billion COVID-19 Resilience Package here: Also, economists surveyed by Bloomberg estimate that the budget for FY2021 might lead to a budget deficit of about 4 per cent of GDP.

In other words, this might be the third year that Singapore is running a budget deficit, a slight deviation from its financial prudence in the past.

Also, in an interview with Bloomberg Editor-in-Chief John Micklethwait at the New Economy Forum, Singapore Prime Minister Lee Hsien Loong stated that he expects the government to run a budget deficit at least through early next year, and perhaps “a while” longer.

Is This a Concern?

This is not too big of a concern if the Singapore economy recovers.

However, this optimistic outlook has to be viewed in the light of Singapore’s GDP shrinking by a historic 13.4 per cent in the second quarter.

In addition, we must also take into account that the global economy’s recovery is still facing headwinds; with uncertainty stemming from how well countries around the world recover from the COVID-19 pandemic.

What about Singapore’s debt you may ask?

Well, the answer is reassuring as although the International Monetary Fund (IMF) reports that Singapore’s national debt-to-GDP ratio (percentage of GDP) stands at 132.35 per cent (as of 16 Feb 2020); the percentage that is reported is actually Singapore’s gross national debt.

If you look at the country’s net national debt, you will realise that Singapore remains a net creditor.

This is because Singapore’s constitution and the Government Securities Act does not allow the Singapore government to use any monies borrowed using debt securities to supplement the budget.

Instead, according to MAS, the government currently issues the following domestic debt securities for reasons unrelated to the Government’s fiscal needs:

Why it is Needed?

You might be wondering, why is this deficit needed?

According to DPM Heng, the COVID-19 measures implemented by the government is estimated to have reduced Singapore’s GDP contraction from -12.4 to -5.4 per cent and resident unemployment form 6.1 to 4.1 per cent.

Clearly, without these measures, people in Singapore will be much worse off for it.

What About the Future? Who Will Pay for It?

Unlike other countries that have borrowed heavily or ‘printed money’ to fund huge COVID-19 relief packages, Singapore has been considerably more prudent as it tapped on its reserves instead.

This will continue to FY2021 as the government is proposing to draw an additional $1.7 billion from the reserves to fund the $11 billion COVID-19 Resilience Package.

DPM Heng also added that it is “not tenable for the Government to run persistent budget deficits outside periods of crisis.’

Therein lies the challenge for Singapore to find ways to offset these costs with additional revenue.

In an interview with The Business Times, Yeo Kai Eng, indirect tax leader at EY ASEAN stated that the government:

“would want workers and firms to keep as much as (possible of what) they earn, and be free to choose how they spend, save or invest”.

Not to mention that Singapore relies on status as a low tax haven to attract and retain foreign investments and talent.

But, DPM Heng also announced a series of road tax rebates to help motorists with the transition.

The spotlight also falls on the upcoming GST hike.

During the 2021 Budget Speech, DPM Heng mentioned that GST rate hike will not happen in 2021 due to the current economic conditions. 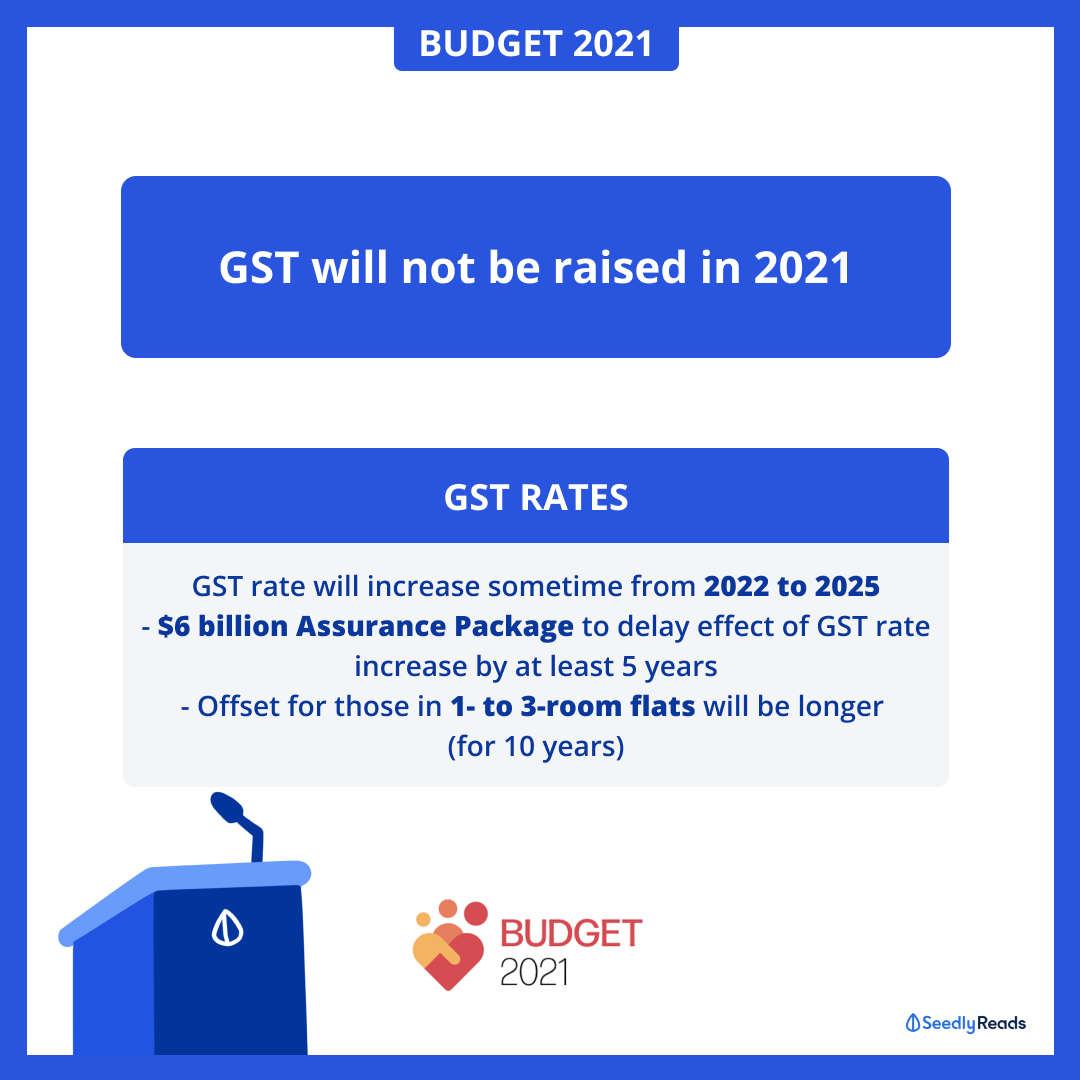 Instead, the hike will happen sometime between the year 2022 to 2025, as Singapore will not be able to put off increase for too long.

This added source of revenue is much needed to meet our rising recurrent needs such as national healthcare costs.

In addition, GST will be imposed on imported low-value goods from 1 Jan 2023.

This new legislation will apply to goods imported via post or air that are valued less than or equal to the current GST import relief limit of $400.

At the moment you do not need to pay GST on these low-value goods imported via post or air to facilitate clearance at the border.

Plus, GST will also be imposed on imported business-to-consumer (B2C) non-digital services with human interaction.

What Are Your Thoughts on The Singapore Budget 2021?

Share your opinion with other community members on Seedly! 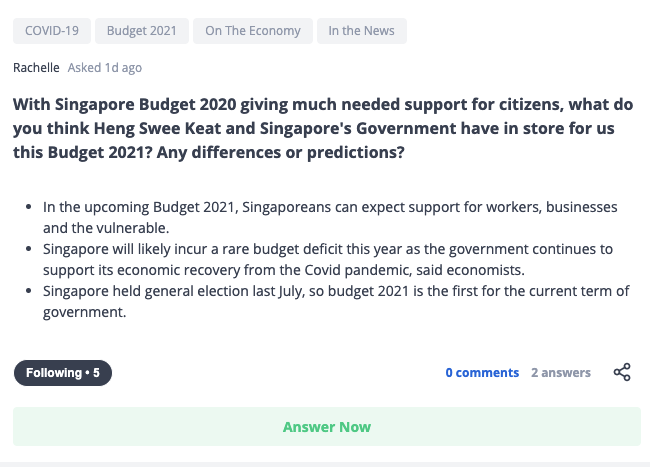