Singapore is Far From Truly Being Cashless. Here's Why. 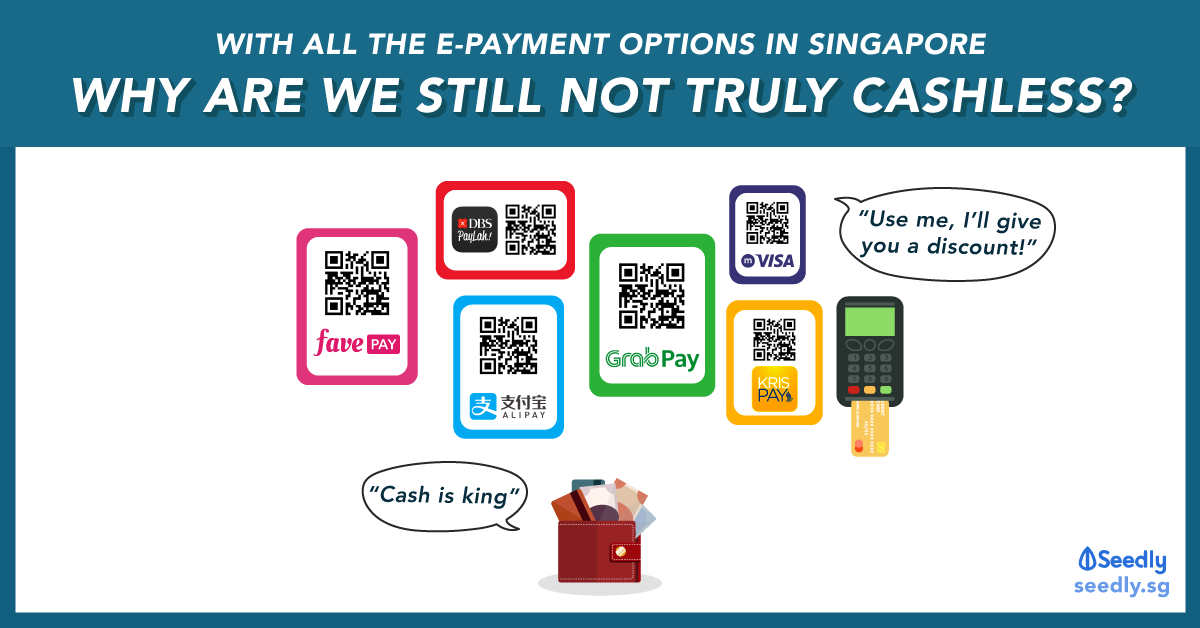 Singapore is Far From Truly Being Cashless. Here's Why.

The whole “Singaporeans try going cashless for a week” type of thing has been done once too many, and I think we all get the point. We’ve been hearing the buzzwords “cashless” and “e-payments” for the longest time now, and I thought this weekend of carelessness taught me good on how far-behind Singapore actually is on the e-payments front.

This all happened because I rushed off from work on Friday evening last week without first doing a second-take at my desk and left my wallet(which has my cash, EZ-link and credit cards) sitting there in the cold, dark, loneliness….but I digress.

Since I didn’t have my wallet, this “cashless-ness” for me was not by choice. I was forced into it!

I either had to borrow cash to pay at certain kopitiams, or got turned down by unwilling stallholders who did not really like the idea of using their QR-code payments due to the convenience fee incurred.

The weekend without my wallet made me realise that if come one day, our nation says “snap snap, we’re doing away with cash entirely”, then we sure aren’t ready for that.

Research firm RFi Group found that almost two-thirds of consumers prefer to use cash for low-value purchaes, and that only 15% of local retailers accept contactless payments through smartphones or cards.

So why is Singapore way behind on the cashless-ness race?

Let’s face it, a large majority of users here who are armed with the slew of payments apps in their devices usually only do it for the discounts that entice consumers. It’s a different story over in China, where their large user base are on AliPay simply because that is the EASIEST and most WIDELY-USED platform, without the need for enticing tactics.

Some consumers feel that the myriad of options are confusing and would work much better with one unified system. There is indeed plans for one unified QR code (termed the “SGQR”) initiated by Prime Minister Lee Hsien Loong during the National Day Rally last year. This means that in due time, all service providers will adopt a standardised QR code, which will allow consumers to scan a single QR code, regardless of which e-payment platforms they use.

Building confidence of the security of quick transfers like PayNow still has a bit of convincing to do, considering that there have been cases reported of transfers made to wrong recipients that could not be retrieved, with banks only doing as much as advising users to personally get in touch with the recipient to return the money.

4. Consumers and merchants are still paying a price for going cashless

Convenience fees and transaction fees still largely apply to these e-payment systems and much like the NETS transaction fee, this fosters reluctance amongst merchants in adopting cashless payments for the sole purpose of not compromising on their profit margins. Perhaps there could be more subsidies or waivers from the government on this front.

5. Singapore could have missed the boat for exploring the potential of a ubiquitous EZ-link card

Singapore is indeed way ahead on the cashless era – just think of the NETS cashcard and EZ-link systems, which are perfect systems to roll out a nation-wide e-payments ecosystem. BUT, the huge setback here is that we failed to standardise the ez-link card as the universal payment card, as Hong Kong did with the Octopus card.

Why should we gear towards the goal of a cashless, smart nation?

As much as cash is easy and familiar to use, and is also intertwined into our culture such as when we give it in red packets or green packets during festivities, e-payments have significant advantages over cash and cheques.

Is it a far more convenient mode of payment, shortening queues and eliminating the need to physically go down to banks or post offices to pay monthly bills.

For businesses too, e-payments are better than cash and cheques. They help increase efficiency and cut down the time and effort in counting cash, keeping accounts for the cash register with items sold, and reducing the need to carry that money to the bank or encashing cheques. Digital transfers are also a much safer option to holding on to a large amount of cash.

In essence, the 99% adoption rate of cashless payments still needs some time, but will come to fruition when users see the benefits and gain confidence in “digitizing” their money.