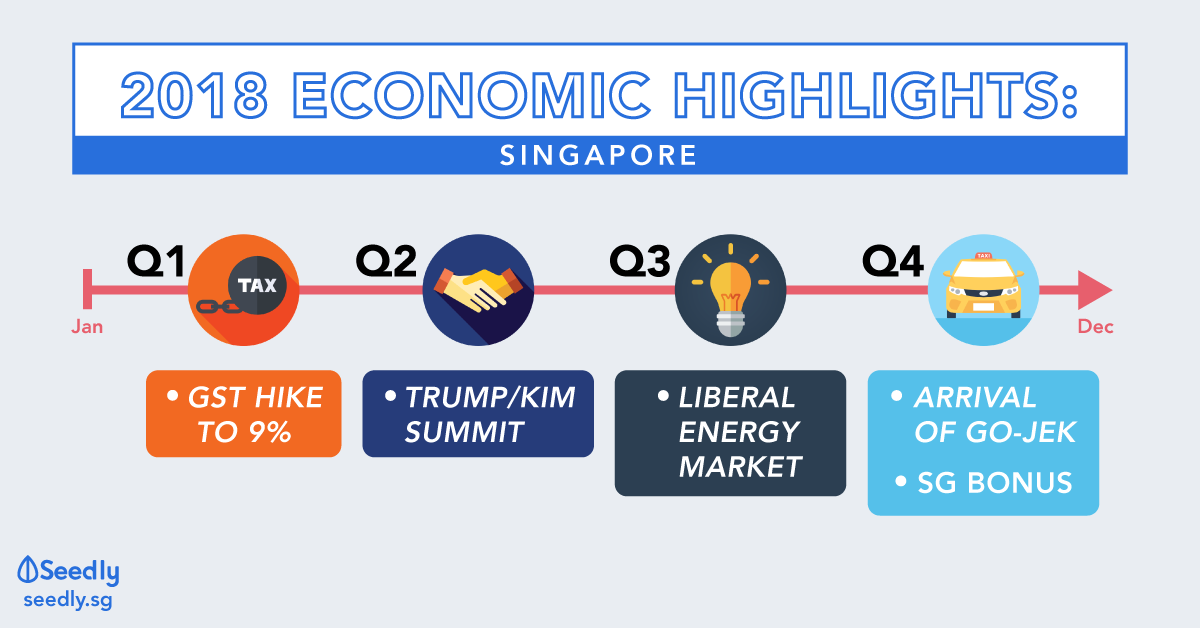 Cue National Pride: Stand up for Singapore, Do the Best You can.

TL;DR: A Summary of the Economic Outlook in 2018

Thus far, Singapore’s economy has certainly experienced its fair share of revisions, opportunities and expansions. Particularly, our tiny state has bore witness to several historical events in the past year –

These key events have become pivotal moments in Singapore’s history where its economic and financial impacts extend beyond 2018 and are projected to have lasting impressions on our nation’s growth as an economic powerhouse within the Asia Pacific region.

Alas, let’s take a journey through 2018 and examine what and how each quarter shaped Singapore’s enrichment.

We’ll begin with a slow march through the Q1, transitioning to a jog in Q2, making our run past Q3 and finally sprinting to the final countdown in Q4. 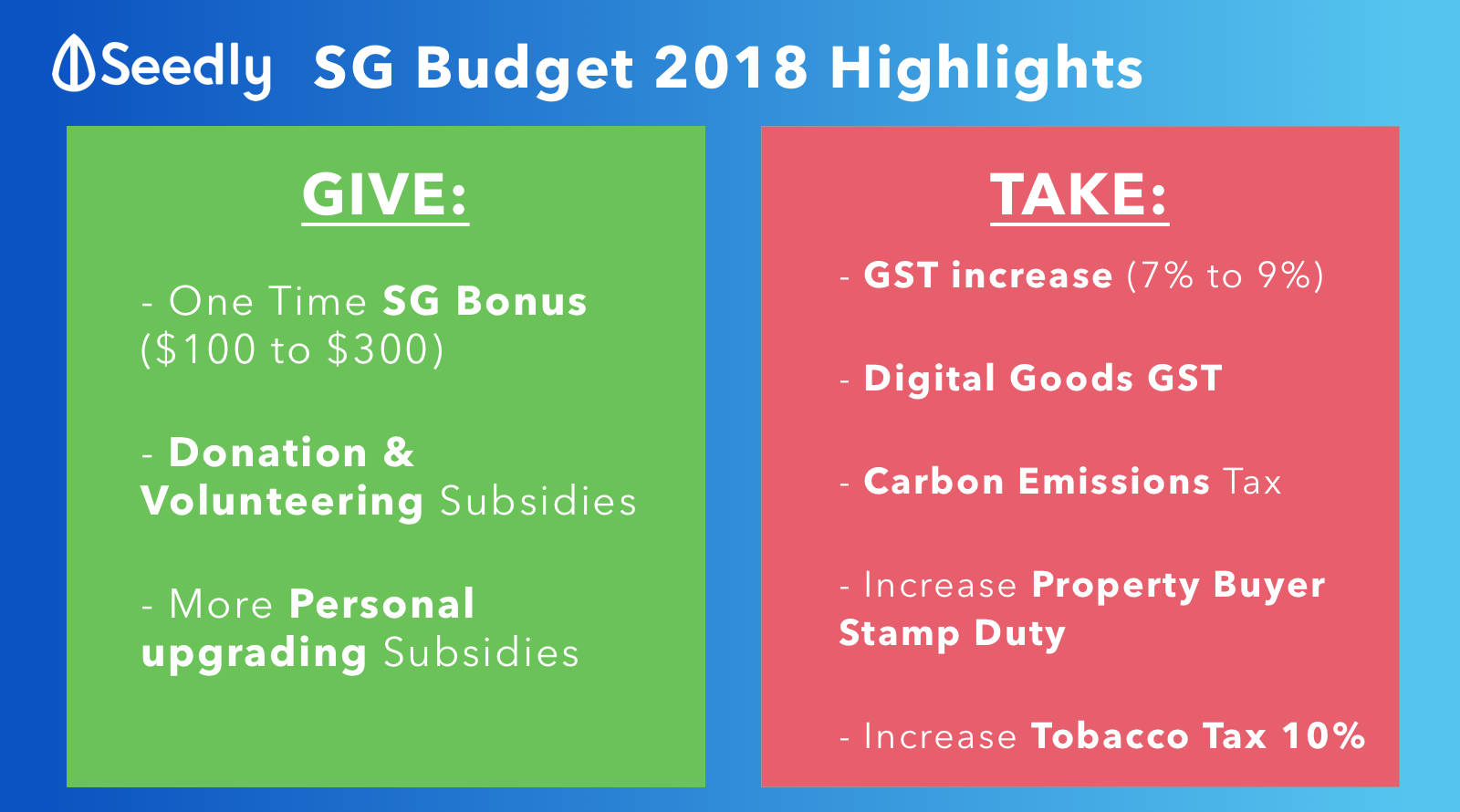 Read here for a candid analysis on how the rise in GST will affect all of us in our daily lives such as our favourite Nasi Lemak or Mee Pok dishes.

Notably, the period of execution would be dependent on several factors, mainly –

Interestingly enough, this is the first time a GST adjustment has been announced 3 years in advance. Previous adjustments were normally made 1 to 1 1/2 years ahead of time  – which begs the question, why is it a different strategy this time?

In lieu of the next general election taking place in 2021, one could not wonder but to question if such an early announcement was enacted deliberately as a political tool.

In the grand scheme of things, politicians rarely advocate for increment in taxes. The reasons should be fairly obvious. After all, if history has taught us otherwise, revolts have been made against bigger empires amidst worser tax increments.

Whilst is true that government reserves can be used to pay for expanding expenditures in the fields of healthcare, infrastructure and education among many others, such a fiscal strategy would arguably generate even more uncertainty in the economy.

Put simply, if we often put aside a sum of money as an emergency reserve, why shouldn’t the government follow suit? Moreover, with millions of other variables in play (I exaggerate, but you get the point), a seemingly conservative fiscal policy may not be such a bad thing after all.

Now, you maybe wondering how exactly does a GST hike affect my personal finances in the long run?

For starters, the 2% increment is expected to affect areas such as –

While many would argue a 2% increment, totalling to 9% seems a bit excessive, it is necessary when we account for major upcoming developments such as Changi Airport Terminal 5 or Tuas Mega-port.

Next, we move on to one of the biggest highlights in the second quarter of 2018.

Touted as one of the key historical events of the year, the Trump-Kim Peace Summit was a resounding success in establishing Singapore as a robust nation on the world stage and in particular, the SouthEast Asia region. Our ability in maintaining and executing the peace and security between the most world’s most powerful man and potentially the most dangerous had compounding effects in the likes of our social security and economic status among many others.

While the debate remains if the peace summit had a tangible conclusion to world stability, its financial impact to Singapore was undeniably positive. Media analysts concur that approximately $700 million in exposure was generated from this event alone. To put that into perspective, the government reportedly spent approximately $20 million. That’s an approximate 35 fold return on their investment.

These numbers would be significantly larger if we were to include post event financials.

In terms of its competitive position, there’s no doubt that Singapore has become one of the focal points of global attention. Purely gauging from our economic stability, financial status and national security, our competitive position as a noteworthy asian brand has never been stronger.

Without a doubt, the trickle down benefits from events of such scale would have universally beneficial impacts for Singaporean business both at home and abroad.

The complete privatisation of Singapore’s electricity market has finally materialised and would cover the entirety of our sunny island by May 2019. 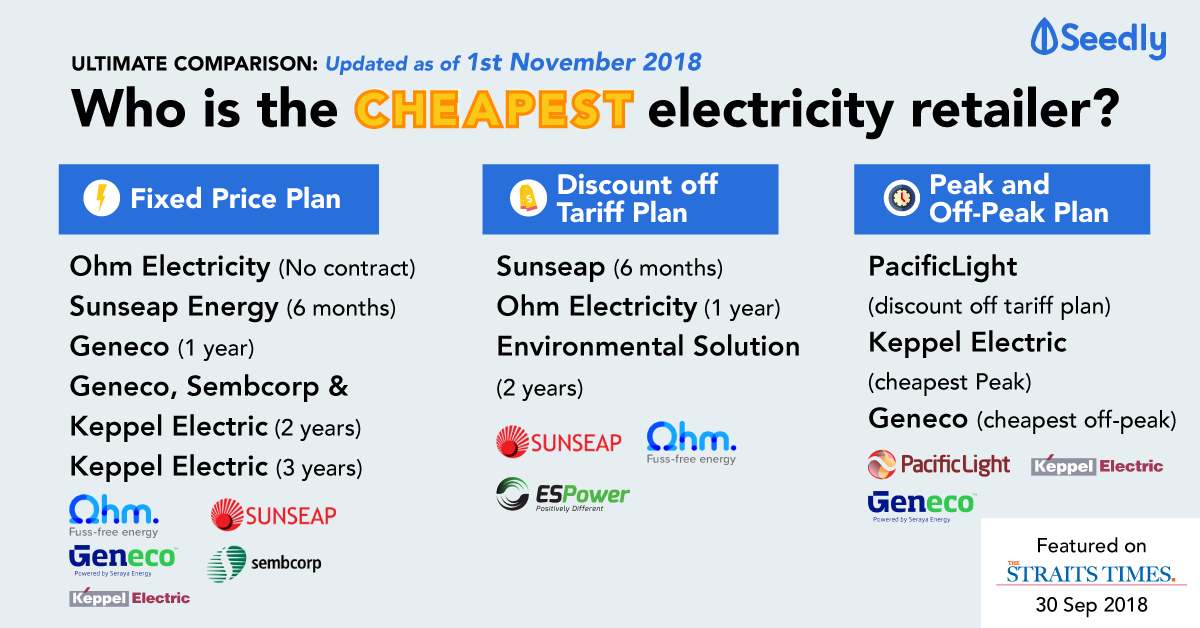 Introduced through the Open Electricity Market plan, netizens would no longer have to purchase their electricity needs solely from the SP group. Rather, netizens are now given the flexibility to choose their preferred energy consumption plans from as many as 13 players in the market. For a much more comprehensive breakdown, you can check out this article here!

To that end, with the liberalisation of the energy market, the local electricity sector has clearly become more sophisticated. Introducing freedom of selection has historically been beneficial for both consumers and industrial players alike.

Economically speaking, the advent of new products and services to be offered would serve as an extended tool for the development of new innovative industry practices and probable extension of the industry into seemingly unrelated fields.

For example, there are instances of electricity retailers offering consumers payment options via digital currency, i.e. the integration of blockchain technology.

And so, we’ve reached the final quarter. I’d like to think this would put a smile on most of you. No doubt, it has already generated a significant buzz among the Grab aficionados out there.

Announced not less than a week ago, GO-JEK made their explosive debut in Singapore’s private car hire market. Joining the likes of Grab, Tada, Ryde and local taxis, competition in the ride-hailing market has never been higher. Tensions are considerably higher as each platform fights to gain market share. As such, it would be reasonable to expect another round of promotional giveaways as 2019 rounds the corner.

At the heart of such a share economy, the increased access and competitiveness among each firm has made its mark via efficiency resource allocations in the transport sector.

Say what you will about the supposed arrogant attitudes adopted by these firms, but their presence has brought about “new” innovations to public transportation.

Note: I consider the private hire market as an intermediate medium between private & public transportation. But I digress.

For example, SBS’s introduction of on-demand bus services are set to begin trials on 17 December. Indeed, the idea of an on-demand bus network paints a rather utopian future, but are we really that far away from such a realisation? I think not.

With competition rife in the private sector, the many trials and tribulations only serve to increase our efficiency, further reduce costs and provide comprehensive services for consumers.

On a macro scale, the meteoric entry and rise of these tech giants would indirectly contribute to the public good. Be it through threatening established monopolies or enabling constant innovation, the economic benefits seem endless.

A Sum of the Whole

All in all, Singapore’s growth has maintained one of the strongest positions in the region. Even with protectionism views in trade on the horizon, economists continue to expect a sizeable growth forecast. On that note, GDP growth performance improved slightly to 3.9% from 2017 according to official data.

With all that said and done, economic indicators would seem positive. However, there remains a need for Singapore to be vigilant. In light of recent events, the risks of economic policy gaffes amid protectionism fears should not be taken lightly.

On a brighter note, all Singaporeans would receive their one time SG Bonus of up to $300 by the end of 2018 – no doubt a triumphant achievement from Singapore’s incredulous economic growth and resulting budget surpluses!

How will you be spending your bonuses? Let us know in the comments!