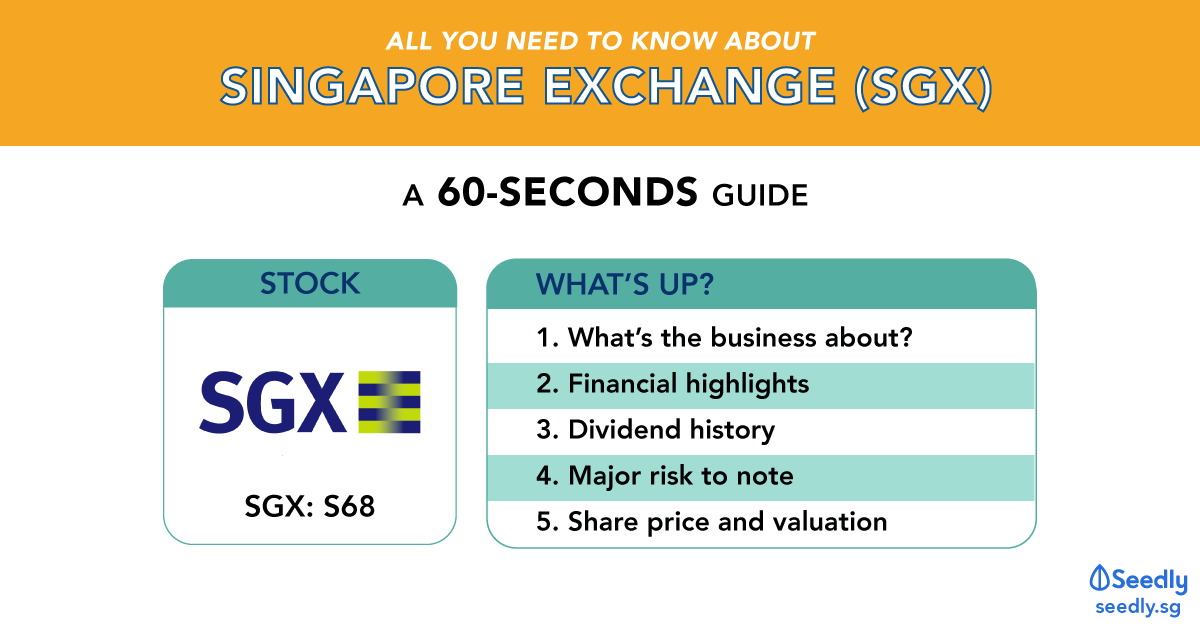 In this new series, we will feature one Singapore-listed company each time as a quick guide to everything you should know about it in 60 seconds.

In this instalment, we have Singapore Exchange Limited (SGX: S68) (SGX), Singapore’s only stock market operator. Previously, we featured Singapore Press Holdings Limited (SGX: T39), the publisher of The Straits Times and the likes.

The company prides itself in being the “most liquid international market for pan-Asian listed derivatives” and the most international stock exchange in Asia.

Last but not the least, the Market Data and Connectivity segment provides market data and connectivity services.

Pictorially, the following is how SGX’s FY2019 (fiscal year ended 30 June 2019) revenue can be broken down:

SGX announced a new organisation structure that took effect on 1 July 2019. With that, the business segments will be re-shuffled into 1) Fixed Income, Currencies and Commodities; 2) Equities (Cash and Derivatives); and 3) Data, Connectivity and Indices for FY2020.

Being the only stock market operator in Singapore, anyone who wishes to trade shares has to go through SGX; there’re no two ways about it. Also, with a broad range of derivatives being offered, SGX can tap into the rapidly growing derivatives market.

Therefore, it is not surprising to see SGX performing well financially over the years:

In my opinion, it would be near-impossible for anyone to try and penetrate SGX’s stronghold. This characteristic gives the company a wide economic moat.

For FY2019, SGX clocked in a net profit margin of 43% and an ROE of 36%. Both figures are higher than what most companies in Singapore’s stock market can achieve.

SGX’s balance sheet is also rock-solid. As of 30 September 2019, its cash balance stood at S$786.5 million with no bank borrowings.

Since the start of FY2019, SGX revised its dividend policy, as mentioned in a recent earnings release:

“From FY2019, SGX will revise its dividend policy from one based on a percentage of net profit, to one based on an absolute amount.

The new policy aims to pay a sustainable and growing dividend over time, consistent with the company’s long-term growth prospects. This will provide flexibility for SGX to balance its dividend payments with the need to retain earnings to support growth.

SGX will pay a higher dividend of 7.5 cents per share per quarter, starting from the first quarter of FY2019.”

Major Risk For SGX To Take Note Of

A major risk with SGX is that of slowing revenue in its equity business.

In FY2019, revenue from Equities and Fixed Income decreased by 15% to $347.5 million. As of end-2018, SGX’s average daily turnover has been halved since 2007. Big-name delistings and Singapore-grown companies listing elsewhere have also caused investors to worry.

The strong financial performance in FY2019 and in the first quarter of FY2020 have caused SGX’s shares to trade at a multi-year high.

Why not check out Seedly’s QnA and participate in the discussion surrounding stocks like Singapore Exchange Limited (SGX: S68) and many more!

The information provided by Seedly serves as an educational piece and is not intended to be personalised investment advice. ​Readers should always do their own due diligence and consider their financial goals before getting into any investment. The writer may have a vested interest in the company mentioned.