How Do Influencers in Singapore Make Money And Do They Pay Taxes? 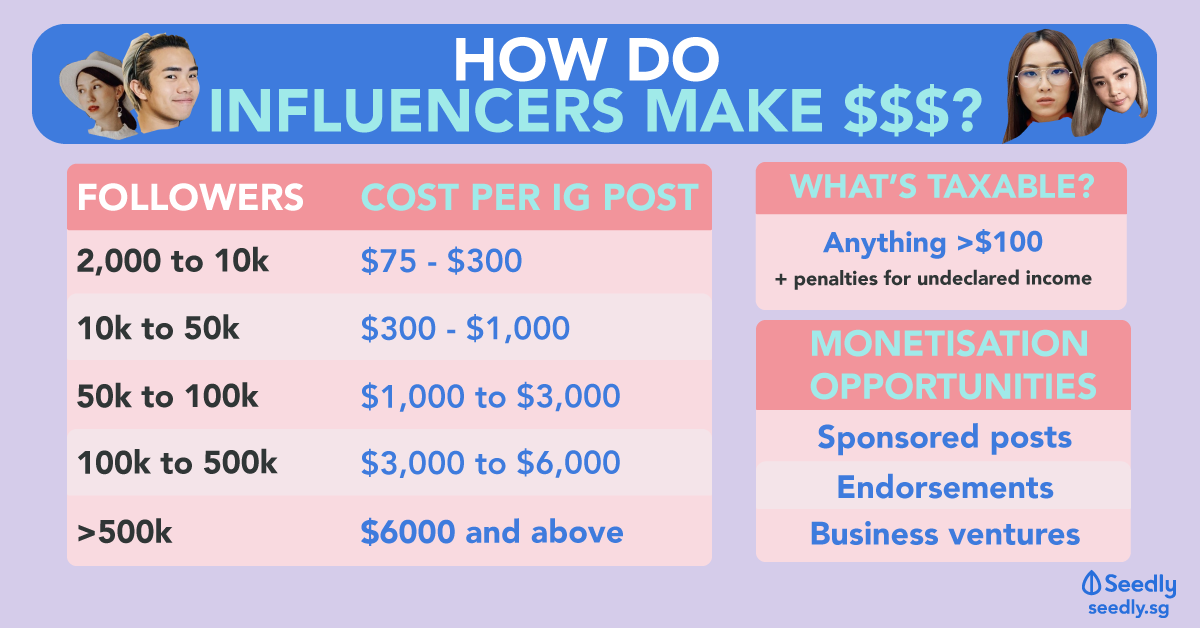 How Do Influencers in Singapore Make Money And Do They Pay Taxes?

Social media influencers – or influenzas, as they’re known in some of my social circles – sure get talked about plenty.

From food tastings and fitness passes to media trips or hotel stays, the perks they enjoy are second to none.

Whether you regard influencers with admiration or derision, there’s something remotely enviable about receiving free sh*t so frequently…even if those gifts may ultimately be taxable.

If you’d rather cut to the chase, go ahead and pick your poison:

TL;DR: How Influencers Make Their Money

What Defines An Influencer?

This one’s for the uninitiated, but here we go: an influencer is someone has the power to influence the decisions of others.

While paltry in comparison, Singapore’s got 2.24 million active Instagram users – and almost 60% of them are aged between 18 to 34.

For purposes of this piece, I’ll be focusing on Instagram influencers, as opposed to vloggers.

While the success of YouTubers like Nas Daily continues to elude me, the mechanics behind monetising videos deserves an article in itself.

What Types of Influencers Are There?

That’s because how much they earn from a sponsored post is determined by their number of followers, likes and comments.

It may be for this reason that – contentious but factual statement about to be made! – about 17% of influencers in Singapore pay for artificial follows and comments.

That’s according to AI tool HypeAuditor, which also recently found that around 27% of Singapore-based influencers buy followers.

Ethics aside, I’m frankly of the belief that the economics behind paying for (false) popularity makes sense… at least, in monetary terms.

I mean, after the whole Daryl Aiden Yeo shebang, are there any lines to be drawn when it comes to deception?

The below table shows what I’ve christened influencer taxonomy – or the classification of an influencer’s success based on popularity.

Some influencers also have areas of specialty, from food or beauty to fashion/travel/entrepreneurial pursuits.

How Do Influencers Make Money?

Beyond freebies, these are some ways social media influencers capitalise on their popularity:

As you may know, sponsored content refers to payment in exchange for exposure – often through positive reviews or explanatory posts. These influencers may also get sponsored freebies while at it.

Just as celebrity endorsements are to be taken with some skepticism (I’m fairly confident Cristiano Ronaldo isn’t actually a Shopee customer, lolz), influencer endorsements aren’t all that different.

Influencers also tend to rave about the benefits of a particular brand/product/experience, rather than do a fair comparison against its competitors.

Occasionally, influencers collaborate with bigger brands – or launch products and experiences to further grow their reach.

Kylie Jenner’s lip kits are an easy example; in Singapore, The Sam Willows’ Sandra Riley Tang was most recently co-founder at The Yoga Collective.

While it’s often more common for influencers to branch into businesses, it sometimes works in the reverse.

Yoga Lab founder Jasmine Chong set up her first studio before amassing a following on Instagram; today, she’s become something of an influencer herself.

How Much Do Influencers Get Paid?

As we’ve established, influencer marketing is pretty huge. Here’s a breakdown of how much an Instagram post or story can command:

Do Influencers Need To Pay Taxes?

Believe it or not, influencers do have to file for taxes on all the free stuff they’ve received, so long as the item or experience exceeds $100 in value.

So, whether or not the revenue comes in form of gifts or actual money – and oftentimes it’s the former – most benefits derived earned from social media activities must be declared.

How Does It Work?

Justin therefore has to declare a taxable sum of $4,300, based on the market retail price of each freebie.

While a one-off food tasting under $100 is not taxable, going for five food tastings at the same restaurant means Justin would have to declare the total value of his meals from Kafe Utu.

And for that Bali holiday with the family? This is what’s stipulated by IRAS:

So, yes – going on a free holiday means Justin would end up bearing the cost of it, by way of taxes.

What Happens If An Influencer Understates Taxes?

If you’ve mistakenly left something out, expect a fine of up to $5,000, plus possible imprisonment of as long as three years.

It gets more severe in cases of deliberate tax evasion. Penalties include:

What About Part-Time Influencers?

Some influencers hold full-time jobs, but accept sponsorships and freebies on the side.

Essentially, they’re part-time influencers – and nope, they aren’t exempt from declaring their taxes.

If there’s anything I’ve gleaned from all this research, it’s that the price of popularity can be a steep one.

Being an influencer may sound great in theory…but the same could be said of many things. The glossiness of polished IG posts rarely tell the whole story.

Is the Black Mirror era truly upon us? You bet it is.