On 11 Dec 2017, the Competition Commission of Singapore (CCS) announced that it will soon be lifting warranty restrictions that require car owners to get their cars serviced only at predesignated workshops. By freeing drivers to service their cars at any workshops of their choice without worrying about losing the warranty on their cars, this measure is meant to make car maintenance more affordable. But is this really a game changer for most car owners in Singapore? Here is ValuePenguin’s assessment of potential impact of this policy on driver in Singapore.

At least 30% of car owners could benefit from this policy

First, it’s important to note that the CCS’s new announcement is mostly relevant to new car owners whose vehicles are less than 3 years old. Because most manufacturer warranties expire after 3 years, people who drive cars that are older than 3 years should already be enjoying lower prices at independent workshops even without this new provision. However, this new policy could still help a pretty sizable portion of car owners in Singapore save hundreds if not thousands of dollars annually since about 30% of cars on the island are less than 3 years old as of 2017. If you are planning on purchasing a new vehicle or if you already own a relatively new vehicle, you could stand to save on your costs mainly in two ways. First, your cost of maintenance and repair could drop by as much as 50% to 70% in some cases. For example, the total cost of regular maintenance work (i.e. replacing the engine oil and oil filter, draining plug gasket, or replacing air filters, brakes and engine coolant) at Toyota’s and Honda’s authorised shops should be around S$3,600 to S$3,700 over a 5 year period. In contrast, getting the same services at an independent workshop could cost about S$2,300, roughly 35% cheaper. If you require repairs after accidents, the difference could be even more significant. However, it’s also worth noting that dealers’ authorised workshops may be more dependable for major or complicated repairs that may require manufacturer’s specific replacement parts. 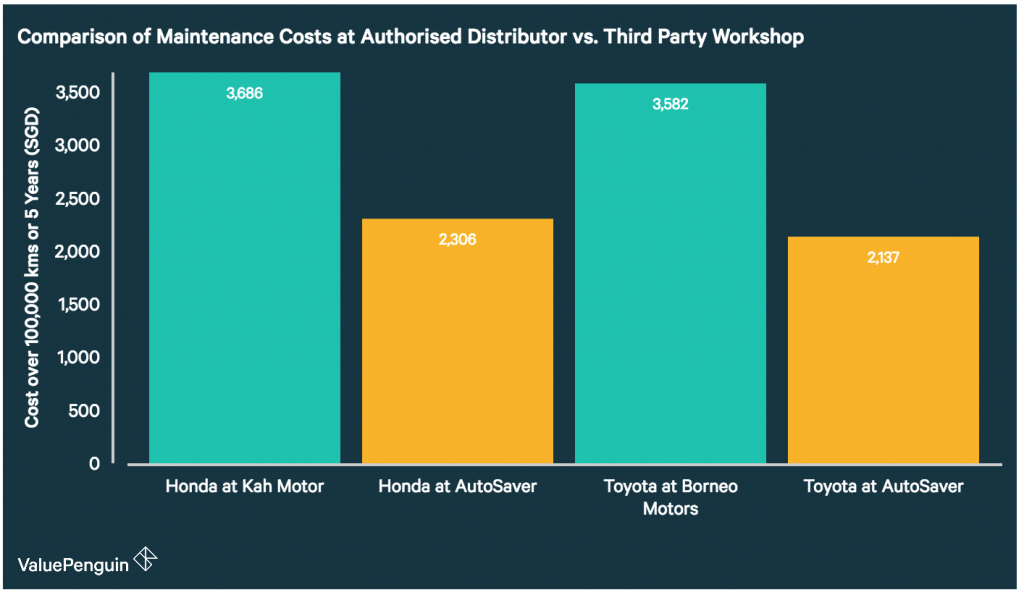 However, the CCS’s new policy that is set to begin in 2018 can actually liberate consumers from this restriction. Since drivers can now take their cars to any service centres, they no longer have to purchase an expensive car insurance policy that will let them take their cars to the dealers’ authorised shops, a change that could help them save more than a thousand dollars in some cases.

Overall, it seems that 30% of drivers who own cars that are less than 3 years old could stand to save at least S$500 per year in maintenance and insurance costs due to the CSS’s new provisions. Some consumers could also easily save up to a thousand dollars without worrying about losing their car’s warranty by switching to cheaper and better ones. However, the other 70% could also potentially benefit from an overall decrease in auto workshop prices. CCS’ chief executive Mr Toh Han Li stated that “the removal of the warranty restrictions will facilitate a more competitive market for car repairs and servicing” If the workshop industry truly becomes more competitive, it could actually mean lower prices for services, parts and repairs for car owners in general as workshops begin to compete more earnestly without restrictions.