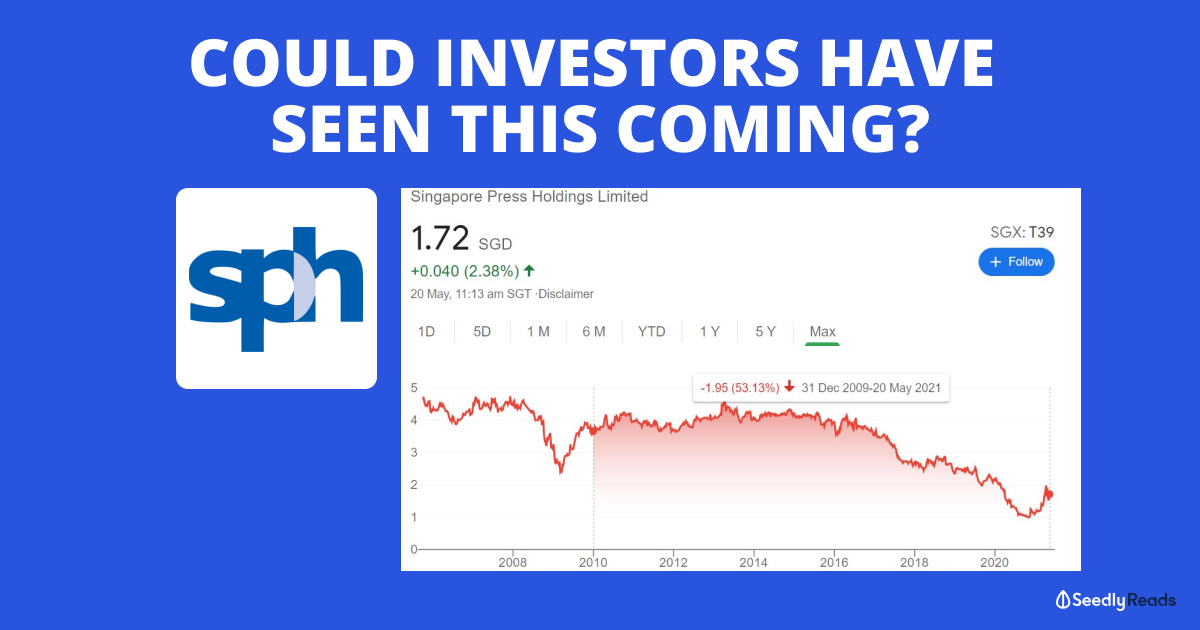 Singapore Press Holdings Limited (SGX: T39) (SPH) is one of the few blue-chip companies I’ve been avoiding investing in.

Its core business has been severely crippled, eventually leading to the group announcing a restructuring plan to hive its media arm earlier this month.

(Yes, that was the time when the word “umbrage” spread like wildfire, sparking many memes and merchandises.)

Investors will be forgiven if they had taken umbrage with SPH’s share price decline of over 50% in the past 10 years or so, with the fall steepening from 2016.

With that, there’s one important investing lesson I gleaned from watching SPH from the sidelines, and that is…

A Company’s Moat Is Not Permanent

World-famous investor Warren Buffett mentioned in his 1995 letter to Berkshire Hathaway shareholders that he looks out this thing in particular when it comes to investing:

“In business, I look for economic castles protected by unbreachable ‘moats.’”

An economic moat acts as a powerful deterrent to those considering encroaching the territory of a company.

This competitive advantage allows the company to earn outsized profits in the long run.

SPH’s attractiveness comes from it being the only publisher of daily newspapers across four languages in Singapore, including The Straits Times.

There’s also a barrier to entry for competitors through regulation.

Under the Newspaper and Printing Presses Act, a newspaper permit is needed to print or publish a newspaper in Singapore.

The near-monopoly status allowed SPH to enjoy a high net newspaper readership, as seen from the chart below:

However, what happened after 2009 is a different story altogether.

Many would know that it was around that time when Facebook started to become popular as a social media platform.

It was also then that consumers went more and more digital to consume news.

Even though SPH pivoted to a digital strategy, it couldn’t stop the overall falling readership.

The declining readership hit SPH’s advertising revenue, which is the biggest revenue driver for the group.

For print ads to do well, there needs to be a high volume of newspaper circulation to entice advertisers to come on board.

On the flip side, Facebook, whose main source of income is digital advertising, saw consistently increasing revenue year after year. The social media giant launched its ad business in 2009.

And a plus point for Facebook is that it doesn’t have geographical barriers, unlike SPH.

So the investing lesson we can draw is that moats are never permanent and they can be destroyed, especially through digital disruption.

Jim Chanos, an investment manager focused on short-selling, once said:

“The internet’s been a great wealth creator, but it has destroyed lots of business plans and lots of moats, and we keep our eye out. It’s amazing how the analog-to-digital revolution just continues to find new businesses to decimate.”

Even if investors were unaware of the digital disruption that the likes of Facebook and Google would bring, they could have smelt something was amiss from SPH’s financial statements.

After peaking at 37.3% in 2010, the SPH media segment’s profit before tax (PBT) margin trended down consistently, ending in negative territory eventually.

The segmental PBT margin, which is calculated by dividing PBT by revenue, shows the operating efficiency of a company’s business segment before taxes.

(Note: The PBT margin in 2017 is exceptionally low due to one-off impairment of associates and a joint venture.)

We can clearly see from the simple PBT margin calculation that SPH’s economic moat was slowly getting eroded.

“To deal with the disruption to our core media business, we will step up our investments to enhance our capabilities in digital, data analytics, radio broadcasts, video and content marketing. These will enable us to seek new growth and better meet the changing needs of our readers, subscribers and clients.”

SPH couldn’t do much to stem the bleeding to its core media business, which has ultimately led to the restructuring we are seeing today.

Wanna earn rewards while levelling up your investing knowledge? Sign up for a free Seedly account now and work your way up to a six months trial of StocksCafe! We also have an Ultimate Cryptocurrency Guide waiting to be unlocked too!