Is Singapore Rich? Here’s How Wealthy Singaporeans Are Compared to the Rest of the World Is Singapore Rich? Here’s How Wealthy Singaporeans Are Compared to the Rest of the World

Well, if you are living in Singapore, you should be.

In an absolute sense, people in Singapore are richer than the majority of the other countries in the world.

But, there’s more to this than meets the eye.

Here is what you need to know!

TL;DR: How Wealthy Are Singaporeans

Before we begin, you must know how this report was put together.

Net worth, or “wealth,” is defined as the value of financial assets plus real assets (principally housing) owned by households, minus their debts.

This corresponds to the balance sheet that a household might draw up, listing the items which are owned, and their net value if sold. Private pension fund assets are included, but not entitlements to state pensions. Human capital is excluded altogether, along with assets and debts owned by the state (which cannot easily be assigned to individuals).

Valuations are usually expressed in terms of US dollars using end-period exchange rates, but “smoothed exchange rates” are sometimes used to control for short-term fluctuations in exchange rates. The figures for all years refer to year-end values.

For convenience, we disregard the relatively small amount of wealth owned by children on their own account and frame our results in terms of the global adult population, which totalled 5.2 billion in 2020.

Keep this in mind as you read the article.

How Rich Are Singaporeans?

Here are the statistics.

Our focus should be on the median wealth per adult as the median is the middle value and a superior measure of the norm.

Unlike the mean, the highest values and lowest values do not skew the median as much.

According to Credit Suisse, this is relevant as the top 1% of the wealthiest people in Singapore own about 33.9% of the wealth at the end of 2020.

Despite the COVID-19 pandemic, the average and median wealth per adult in Singapore has increased.

But unfortunately, for the median wealth per adult, Singapore has fallen ten places to position number 20 and was replaced by France, the United Kingdom and Canada.

Breakdown of Household Wealth in Singapore

Financial assets account for over half of personal wealth in Singapore from 58.5% per cent of gross assets in Singapore at the end of 2020.

Here is a further breakdown according to the Singapore Department of Statistics’ Household Sector Balance Sheet (Assets) for the First Quarter (Q1) 2021. 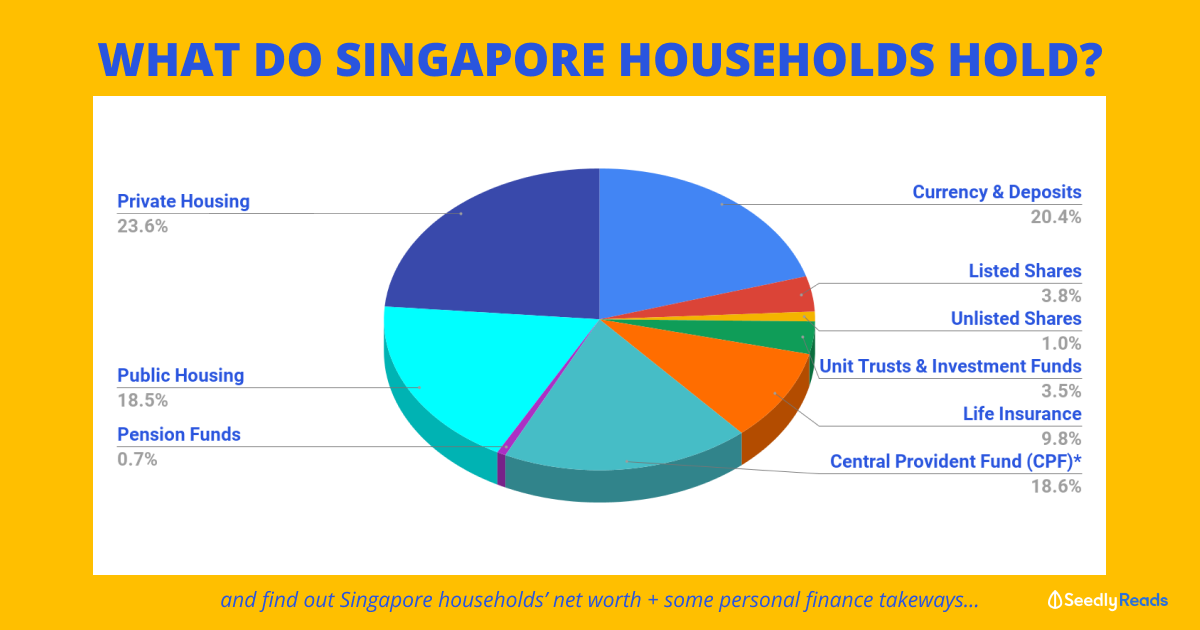 Why Don’t We Feel Rich in Singapore?

So here is the million-dollar question.

Why don’t we feel rich in Singapore?

Well, I would boil it down to three main factors.

Firstly, wealth inequality in Singapore is a thing.

If you are wondering why there is this discrepancy, the relatively hefty inheritance taxes that Korea and Japan have played a part.

As Singapore is small in size, the higher wealth inequality can be attributed to a small, unrepresentative group of high net-worth individuals (HNW). 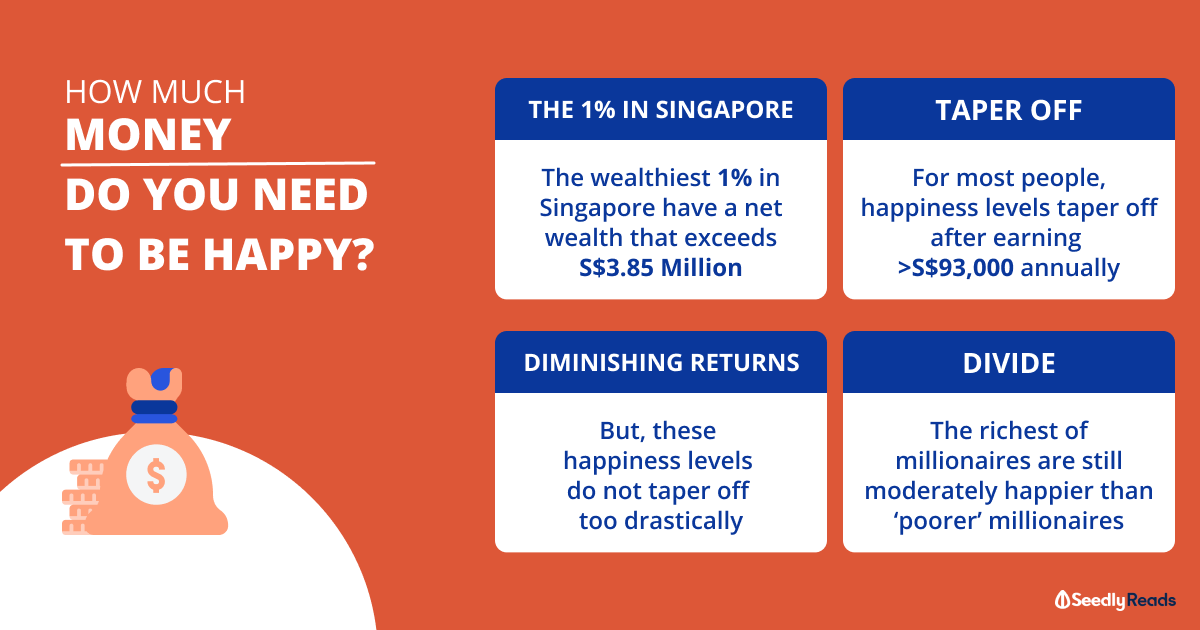 But on balance, Deputy Prime Minister Heng Swee Keat, in response to questions from Singaporeans at the post-Budget 2021 (via CNA) forum held on Sunday (21 Feb 21), said that:

When we measured inequality last year, it is at a historic low. That came out of massive transfers, because our schemes were tilted towards supporting our lower income group.

In addition, the Singapore Department of Statistics (DOS) said that:

resident households received S$6,308 per household member on average from various Government schemes in 2020, which was higher than the S$4,684 received the year before.

Although wealth inequality is a problem in Singapore, the Government is aware of it and is working to address it.

High Cost of Living in Singapore (For Expatriates)

Not to mention the high cost of living in Singapore.

According to the yearly Economist Intelligence Unit (EIU) Worldwide Cost of Living Surveys, Singapore was the most expensive city to live in from 2014-2019.

But in 2020, the trend was broken with the outbreak of the COVID-19 pandemic as Singapore fell three places to fourth place:

But here’s the thing, the survey is geared towards expatriates with a more atas (Malay for expensive) consumption basket:

Also, the survey does not consider the various grants and subsidies given primarily to Singapore Citizens and Permanent Residents who earn less.

Safe to say, I think we do not feel rich in Singapore as the cost of living for expatriates (read: more atas lifestyle) is much higher.

Sure, you can get more value for money options, but the expensive things are a whole lot more expensive.

So here’s the thing.

Even if you are a professional with one of the highest paying jobs in Singapore: 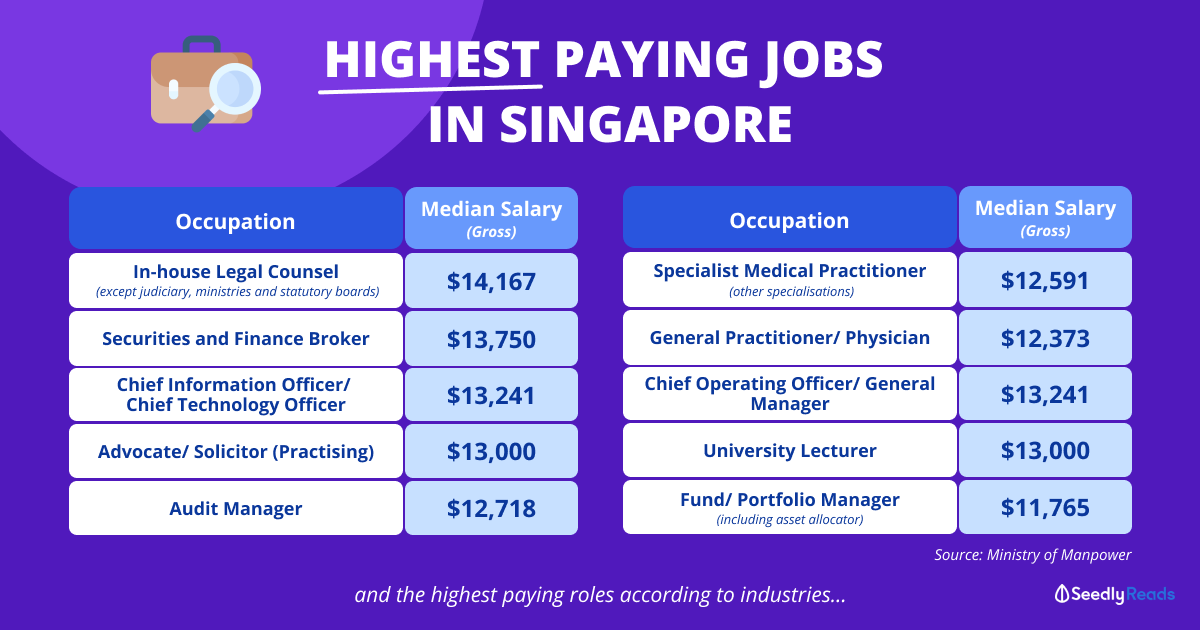 and a sizeable amount of funds and investments set aside for retirement, your net worth can take a hit if your expenditure is high and you lose your job.

This is probably why even those earning quite a bit don’t feel rich, as losing their job could mean that their lifestyle might be in jeopardy.

To be truly wealthy, you should be financially independent.

Being too dependent on your job for income can lead to feelings of financial insecurity, which the rich do not have to worry about.