Singapore Share Buybacks in September 2020: What Investors Should Know 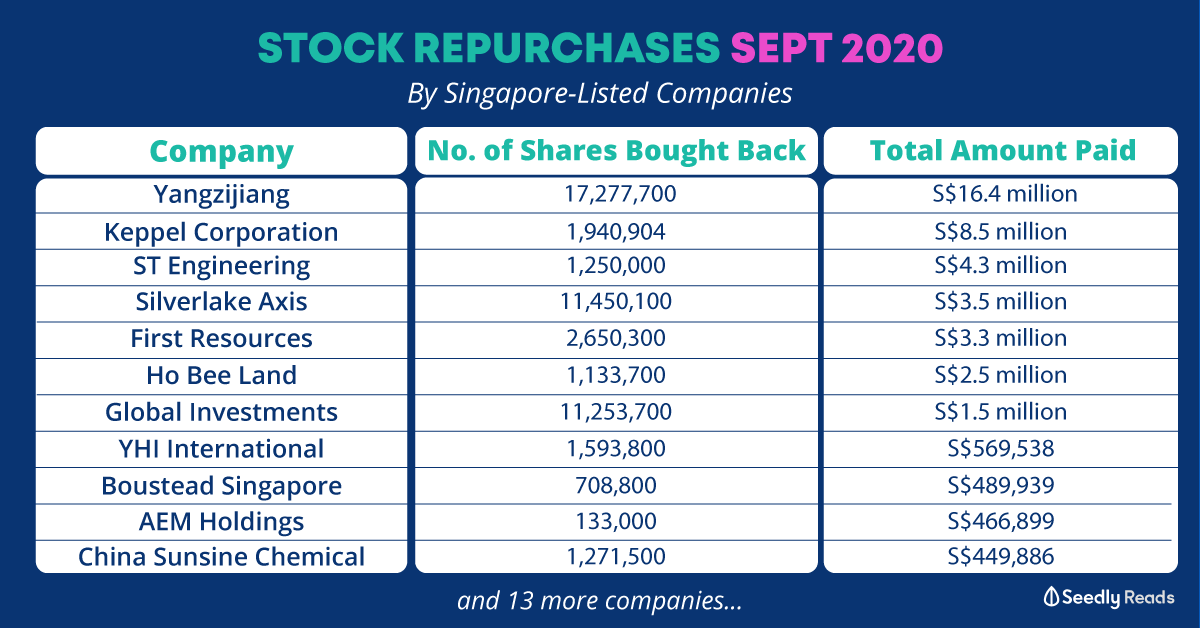 Singapore Share Buybacks in September 2020: What Investors Should Know

A company can do a couple of things with the free cash flow it generates every year.

It can reinvest the money into its business, use it to pare down debt, pay dividends to shareholders, or buy back its shares.

With regards to buying back of shares, there are a few reasons why companies would want to do so.

Warren Buffett, one of the world’s greatest investors, is a huge advocate of companies buying back shares — if done for proper reasons. And that is, if the company’s shares are undervalued, and the reinvestment opportunities into the business are not as good.

Buffett also believes that share buybacks can reveal a thing or two about a company’s management. He once mentioned:

“What you’d like to do as an investor is hook them up to a machine and run a polygraph to see whether it’s true. Short of a polygraph the best sign of a shareholder-oriented management — assuming its stock is undervalued — is repurchases. A polygraph proxy, that’s what it is.”

On the contrary, a company could also undertake share buybacks for cosmetic reasons — to enhance its earnings per share (EPS) since the outstanding share count is lowered. A higher EPS is favoured as it shows that its business is growing.

According to a report by the Singapore Exchange, 24 companies bought back 57.6 million shares for a total amount of around S$43.1 million in September, the highest for the past six months.

Last month’s buyback is up from August’s figure of S$15.1 million and significantly higher than July’s S$2.9 million.

On a year-on-year basis, the September 2020 buyback consideration was 187% higher.

For the first nine months of this year alone, the total consideration of share buybacks for Singapore-listed stocks was S$724 million, up from S$590 million for the whole of 2019.

In general, when the Straits Times Index (STI) is lower or falling, there’s a higher possibility for companies to perform share buybacks as their stock valuations could be depressed.

List of 24 Companies That Bought Back Shares Last Month

The following is a list of all the companies that repurchased their shares in September.

The table includes the number of shares bought back, the average stock price paid for it, the current share price (as of the time of writing on 2 October), and the corresponding P/E ratio and dividend yield.