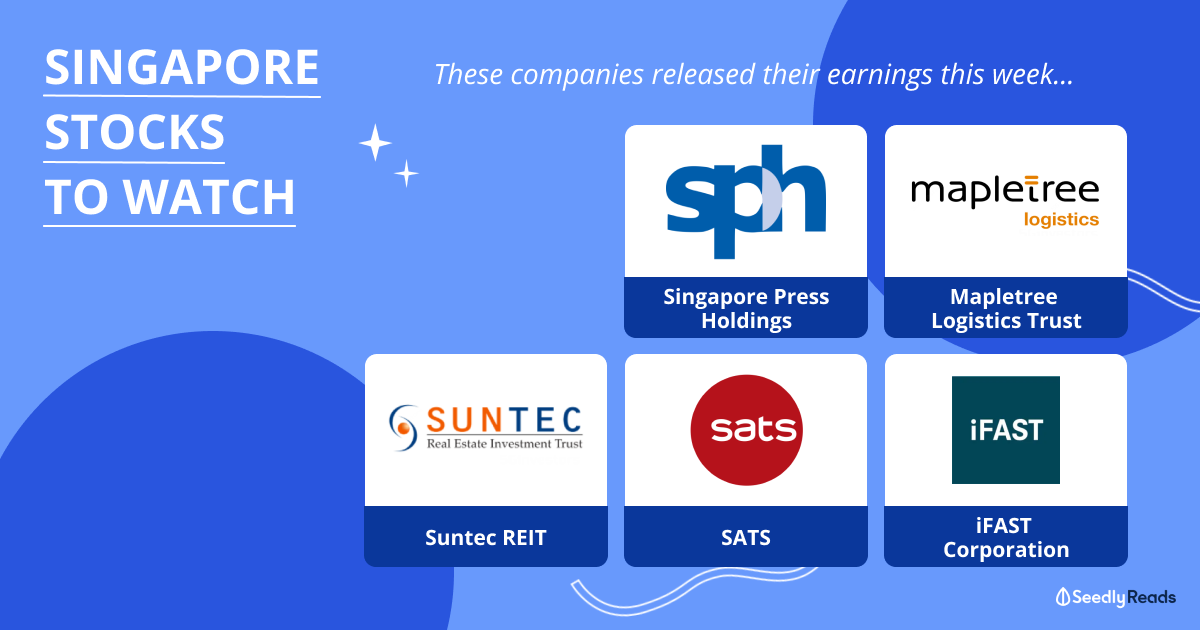 Let’s look at some of the key highlights from their latest announcements here.

Earlier this week, SPH reported that its media business performed poorly, with newspaper print advertisement revenue tumbling 17.6% year-on-year for the first nine months of its FY2021.

For instance, SPH REIT (SGX: SK6U), in which SPH has a majority stake, saw its gross revenue increasing by 22.2% year-on-year to S$209.6 million due to a recovery in performance across all its assets.

SPH REIT’s distribution per unit (DPU) for its third quarter of FY2021 also grew 11.3% to 1.38 Singapore cents, compared to its previous quarter. The latest DPU is back to where it was pre-pandemic.

Mapletree Logistics Trust (MLT) saw continued and steady growth in its operating results on the back of a resilient logistics market.

The growth came on the back of:

With that, Mapletree Logistics Trust’s DPU grew 5.7% to 2.161 Singapore cents.

Ng Kiat, chief executive of the REIT’s manager, commented the following in the REIT’s earnings release:

“MLT has continued to achieve a steady performance in 1Q underpinned by a diversified portfolio and the resilience of the logistics market. The resurgence of infections in the region is a concern but fortunately most of our tenants were able to keep their operations stable. We will remain focused on keeping portfolio stability while continuing to strengthen our geographic network across Asia Pacific, to deliver long term returns to Unitholders.”

Mapletree Logistics Trust has previously announced that it would be acquiring a temperature-controlled warehouse at Changi South for S$24.5 million.

The property is strategically located near Changi Airport and will cater to demand from users involved in high-value and time-sensitive goods, including electronics and pharmaceuticals.

Meanwhile, its DPU was 26.1% higher than last year, coming in at 4.154 Singapore cents. The increase was mainly due to higher distributable income.

There could be continued DPU growth going forward with the acquisition of The Minster Building in the UK.

The Grade A office development with retail offerings was acquired by the REIT for £353.0 million (S$667.2 million) in June this year.

The acquisition will be mostly funded by Suntec REIT’s divestments of a portfolio of Suntec City Office strata units and its 30% interest in 9 Penang Road.

SATS’ earnings continued to improve, with its net profit turning positive for the second consecutive quarter at S$6.4 million.

Excluding government reliefs, net profit would have been a loss of S$35.6 million, better than the loss of S$106.5 million seen exactly a year back.

As for its outlook, the company mentioned that “while mass vaccination programmes are being rolled out in all of the world’s major economies, the emergence of new variants of the COVID-19 virus continue to create uncertainty about when travel restrictions will be lifted.”

It added that it’s adapting to changes in the operating environment by reshaping its cost base and building new capabilities to support future growth.

For example, a cloud-based cargo handling system with AI helps SATS support the e-commerce sector, as well as the transportation of vaccines and oxygen concentrators to many countries across Asia.

Meanwhile, its net revenue (revenue earned after commission and fee paid or are payable to third-party financial advisers) grew 32.0% to S$19.8 million.

Shareholders would be delighted to know that they will receive a higher dividend for the quarter.

Disclaimer: The information provided by Seedly serves as an educational piece and is not intended to be personalised investment advice. ​Readers should always do their own due diligence and consider their financial goals before investing in any stock. The writer owns shares in SATS and iFAST.