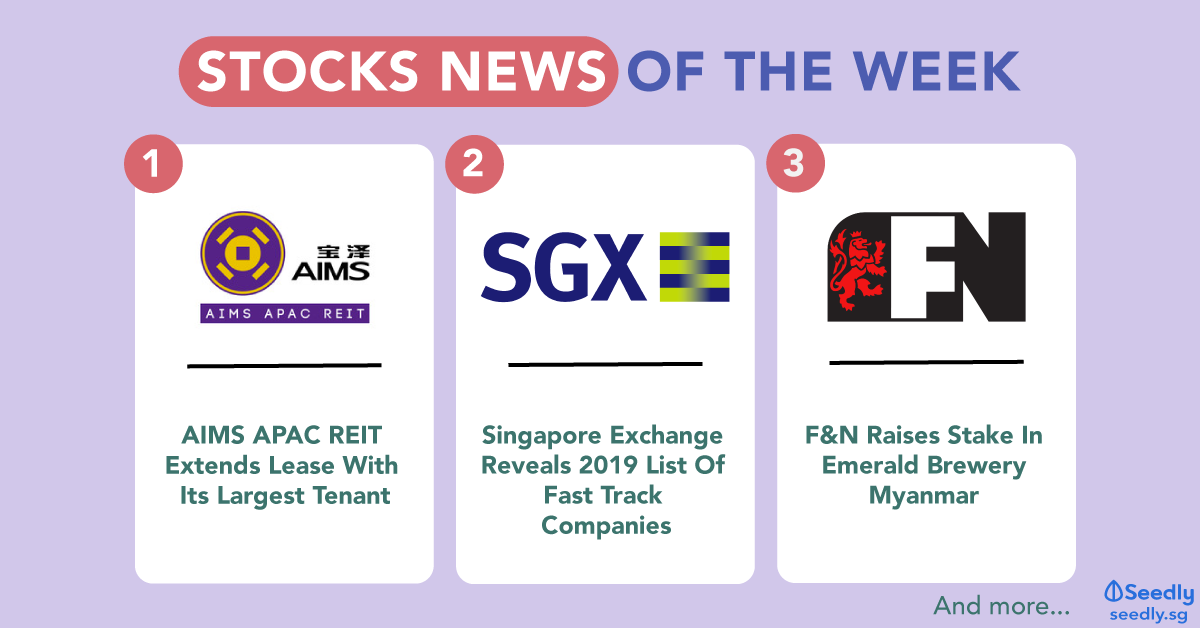 Here’s a selection of Singapore-listed companies that released noteworthy announcements this week (in chronological order).

The new lease will start from 1 July 2021 after completion of an asset enhancement initiative (AEI) to cater to Optus’ latest requirements.

The 12-year master lease has an annual rental escalation of 3.25% on face rent, and two, five-year options to extend the contract after the initial lease term. The average net property income over the 12-year lease term, after rental escalation, is estimated to be around A$36.5 million.

AIMS APAC REIT has a 49% stake in Optus Centre while Stockland owns the remaining 51%.

Most of the companies on the programme are mainboard-listed companies.

With that, F&N now owns 79.88% of Emerald Brewery while Sun Ace Corporation Company Limited (Sun Ace) and Than Lwin Aye Yar Industrial Production & Construction Co Ltd (TLAY) own 20% and 0.12% of the brewer respectively. Sun Ace increased its stake in Emerald Brewery as well while TLAY did not subscribe for additional shares.

F&N returned to Myanmar’s beer market with the start of Emerald Brewery’s commercial production on 1 October 2019 to brew Chang Lager Beer. F&N previously exited the country when it sold a 55% stake in Myanmar Brewery for US$560 million in 2015.

In the middle of this month, F&N announced its financial results for the full year ended 30 September 2019 (FY2019).

As of the time of writing on Thursday, Frasers Logistics & Industrial Trust (SGX: BUOU) and Frasers Commercial Trust (SGX: ND8U) are both halted from trading.

A report by The Business Times stated that there’s a possibility of both REITs merging. It would be interesting to watch what comes out of the trading halt…

Why not check out Seedly’s QnA and participate in the discussion surrounding stocks like Fraser and Neave (SGX: F99) and many more!