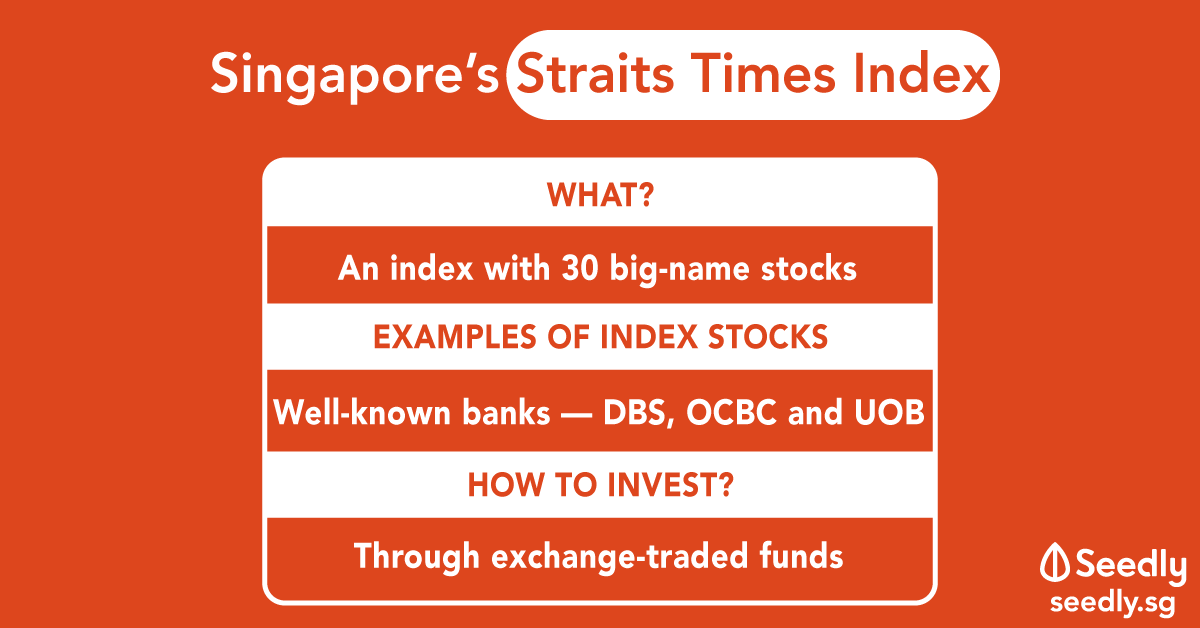 What You Should Know About Singapore’s Straits Times Index (STI)

Investors use a country’s stock market index to get a flavour of what the country has to offer.

You may have come across the more-reported indices such as the United States’ S&P 500 index and the Dow Jones Industrial Average. Over in Singapore, the Straits Times Index (STI) is the city-state’s stock market index.

Let’s dive in to understand more about the Singapore stock market bellwether.

The STI is a market capitalisation-weighted stock market index and is made up of the top 30 largest and most liquid companies listed in Singapore. This means that changes in the market value of larger companies move the index more than that of the smaller ones.

The majority of equity indices today are market capitalisation-weighted, including the United States’ S&P 500 index and the United Kingdom’s FTSE 100.

Other heavyweights of the index include Singapore Telecommunications Limited (SGX: Z74), Thai Beverage Public Company Limited (SGX: Y92), and Keppel Corporation (SGX: BN4), which just made news on Monday this week. The following table gives more light on the top 10 index components and their respective weights:

From the comparison, we can see that banks took up most of the STI at 40%.

What that means is the performance of the banking trio has a significant impact on how the index performs.

Any major slip-ups from the banks due to macroeconomic headwinds or poor performance on their part could cause the index to fall heavily. On the contrary, if the banks perform well, the index should see corresponding increases too.

With the inclusion of Mapletree Commercial Trust into the STI, Mapletree Industrial Trust (SGX: ME8U) steps up to the plate in the reserve list. Here’s a list of the updated five components of the STI reserve list, which are coincidentally all REITs:

Having A Piece Of The STI

Investors who are looking to bank on Singapore’s long-term growth are unable to invest in the STI directly.

However, they can invest in an exchange-traded fund (ETF) that tracks the performance of the stock market index. ETFs, since they are traded on the stock market (and hence their name), can be purchased just like any stock through Singapore’s stock market operator, Singapore Exchange. An advantage ETFs possess is that they allow for instant diversification.

Two ETFs track the STI – SPDR STI ETF (SGX: ES3) and Nikko AM STI ETF (SGX: G3B). Their investment objectives are similar, which is to replicate as closely as possible, before expenses, the performance of the underlying index, which is the STI.

The SPDR STI ETF has a longer listed history; it was listed in April 2002 while its counterpart went public in February 2009. Since its inception, the SPDR STI ETF produced a total return (which includes dividends) of 6.8% annually (as of 30 September 2019).

For an in-depth discussion on the differences between the two STI ETFs, you can check out our previous article here. The article also covers the debate on whether the STI ETFs really provide much-needed diversification.

The information provided by Seedly serves as an educational piece and is not intended to be personalised investment advice. ​Readers should always do their own due diligence and consider their financial goals before investing in any stock.