Best SIM Only Mobile Plans in Singapore (Nov 2021): Most Value For Money SIM-Only Deals For Your Needs 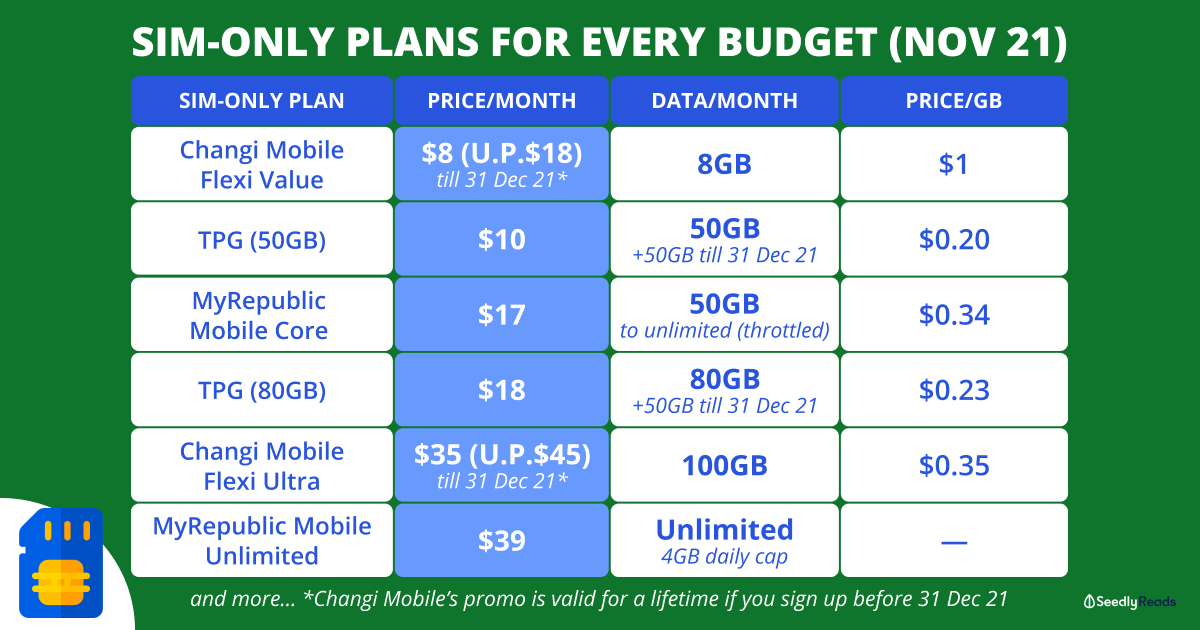 Best SIM Only Mobile Plans in Singapore (Nov 2021): Most Value For Money SIM-Only Deals For Your Needs

Tired of Lock-In Contracts? Want to Save Money? Find Out Which Is the Best SIM-Only Plan in the Market!

Are you still on a 24-month contract mobile plan with Singtel, Starhub, or M1?

FYI: These plans generally offer you a ‘discounted’ smartphone which you pay for in monthly instalments spread over a 24-month contract.

Want to save money, get more data and have the freedom to switch telcos whenever you want?

Then you might want to consider getting a SIM-Only plan instead.

I mean, have you looked at what the various mobile virtual network operators (MVNOs) popping up on the scene like redONE, VIVIFI, and Grid Mobile have to offer?

But how do you choose the best individual SIM-Only mobile plan in the market for your budget?

Note that information is valid as of 3 November 2021 and that prices and promotions can be changed without prior notice.

What Is A SIM-Only Plan?

This way, you can focus on what is most important to you — which is probably data.

They function pretty much like traditional mobile phone contracts, BUT you’re not locked into any minimum contract period.

This means that you are free to switch telcos or mobile plans anytime you like without incurring any penalties.

Why Are SIM-Only Plans so Much Cheaper?

Singapore Telcos and the Network Which They Are On

There are four Mobile Network Operators (MNOs) in Singapore:

And these are the 10 Mobile Virtual Network Operators (MVNO), aka virtual telcos in the market right now:

The reason why these virtual telcos can keep their SIM-Only plan prices so low is because they are not:

Needless to say, once the major MNOs wised up.

They started offering their own versions of SIM-Only mobile plans back in 2019.

Which Is The Best SIM-Only Plan in Singapore?

The best SIM-Only plan really depends on how much data you’ll need.

To figure that out, just have a look at your latest telco bills or check how much data you’ve been using through your smartphone.

And you’ll be able to figure out how much data you use on average each month.

You’ll also want to keep in mind how much talk time and SMS-es (if you’re old school like that) you use monthly too.

After that, you’ll want to pick the cheapest SIM-Only Plan which matches your needs.

BUT as with most things which are cheap, the quality of service and reception are some of the things which suffer.

So if you’re picking an MVNO’s SIM-Only plan, you might want to stick with one that’s tapping on a reliable MNO network.

Here’s a look at who’s on which MNO’s network:

Which Singapore Telco Has The Best Reception?

Also, here is how the telcos compare in terms of coverage according to the Infocomm Media Development Authority (IMDA)’s latest Q2 2021 (April – June) 4G quality of service performance results:

This indicator measures the Nationwide Outdoor Service Coverage for the 4G cellular mobile networks. Service coverage is determined by signal strength. The availability of service coverage is the ability of a cellular network to achieve the minimum signal strength of at least -109dBm. Under IMDA’s 4G Service QoS framework, mobile operators are required to achieve Nationwide Outdoor Service Coverage of > 99%. In order to better measure the end users’ experience*, IMDA uses mobile phones to collect the signal strength data points.

End users’ individual experience may differ due to different models of handset used, handset settings, number of users in the vicinity, etc.

The same sixty buildings were tested across the four mobile operators. The performance of each of the mobile operator varies for each of the building tested. End users’ individual experience may differ due to different models of handset used, handset settings, number of users in the vicinity, etc.

End users’ individual experience may differ due to different models of handset used, handset settings, number of users in the vicinity, etc. The tunnel service coverage results are based on IMDA’s coverage performance surveys.

The MRT Tunnel Service Coverage standard for TPG takes effect from 1 January 2022. TPG announced in October 2021 that they achieved 100% 4G coverage throughout Singapore’s MRT systems (via Hardwarezone). But this has yet to be tested by IMDA.

As you can see from the indicators, TPG is still lagging behind M1, Singtel and Starhub.

Another failproof way is to simply ask people who are currently using the SIM-Only plan which you’re thinking of getting.

Wondering who you can ask?

Just check out the real-user reviews left by the friendly SeedlyCommunity to get a better idea of which is the best SIM-Only plan in the market!

So… Which Is the Cheapest SIM-Only Plan?

If you’re talking about the absolute cheapest.

Circles.Life had a $0 Flexi Plan with 1 GB data, but that was discontinued since 2019.

And TPG offered a $0 XL Unlimited Data Plan for 1 year before their official commercial launch in 2020.

But if we’re looking at the current SIM-Only plan landscape, these options are off the table.

But fret not. You still have many affordable options that we will be categorising based on the amount of data they offer. We will also be excluding the plans that come with a contract as it does not make sense to be tied down by a contract when there are competing offerings that offer similar or better value without the contract.

If you want to save some money and don’t use much data, these plans are for you.

The most value for money plan is undoubtedly TPG’s (50 GB) SIM-Only plan as each GB of data only costs $0.20.

The company is even running a promotion where you get an additional 50 GB of data for free until 31 December 2021. This brings the cost per GB goes down to $0.10!

The next best alternative would be Changi Mobile’s Flexi Best plan, where the data cost per GB is the second-lowest if you sign up before 31 December 2021.

If you want to keep your bill to $10 a month and below, the Changi Mobile Value plan would be our pick as each GB of data costs just $1 if you sign up before 31 December 2021 too.

If you don’t want to use the promo, RedONE’s Amazing8 plan is good as well.

If you don’t mind paying a bit more each month for more data, these plans are for you.

The next best alternative would be the MyRepublic Mobile Core or Pro plans as each GB of data costs just $0.34.

However, if you want to keep your bill to $20 a month and below, GOMO’s (20GB) SIM-Only plan looks good as each GB of data with the promo costs just $0.36, which is one of the lowest in this category.

Last but not least, we have the most expensive plans for the heaviest of data users.

We have excluded the plans over $50 as they are not as value for money.

For this category, Changi Mobile’s Flexi Ultra plan is the winner as each GB of data costs just $0.35 with the promo that lasts a lifetime if you sign up before 31 December 2021.

A close second would be Circles.Life’s 100GB SIM-Only plan as each GB of data costs just $0.38. Also, the plan allows you to roll over 4G data with a total cap of 300GB a month. But do take note of the lack of free incoming calls.

However, if you find that 100GB is still not enough for you each month, you can opt for MyRepublic Mobile’s Unlimited Data plan, which costs $39 per month for unlimited 4G data capped at 4 GB a day with managed speeds thereafter.

SIM-Only Plans For Seniors And Family 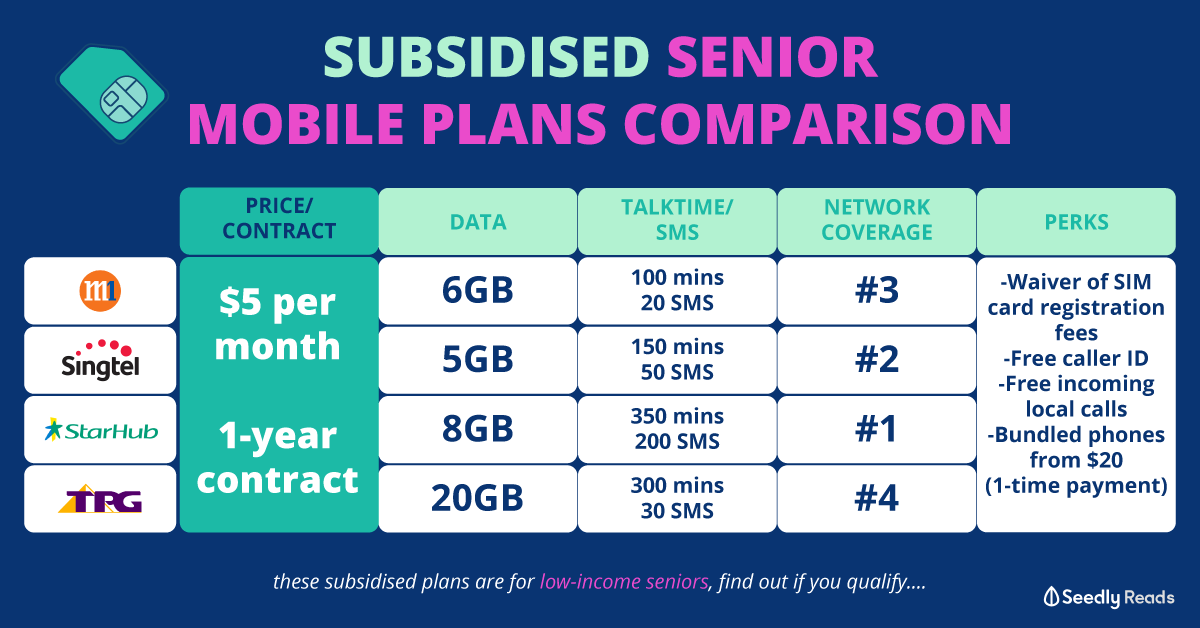 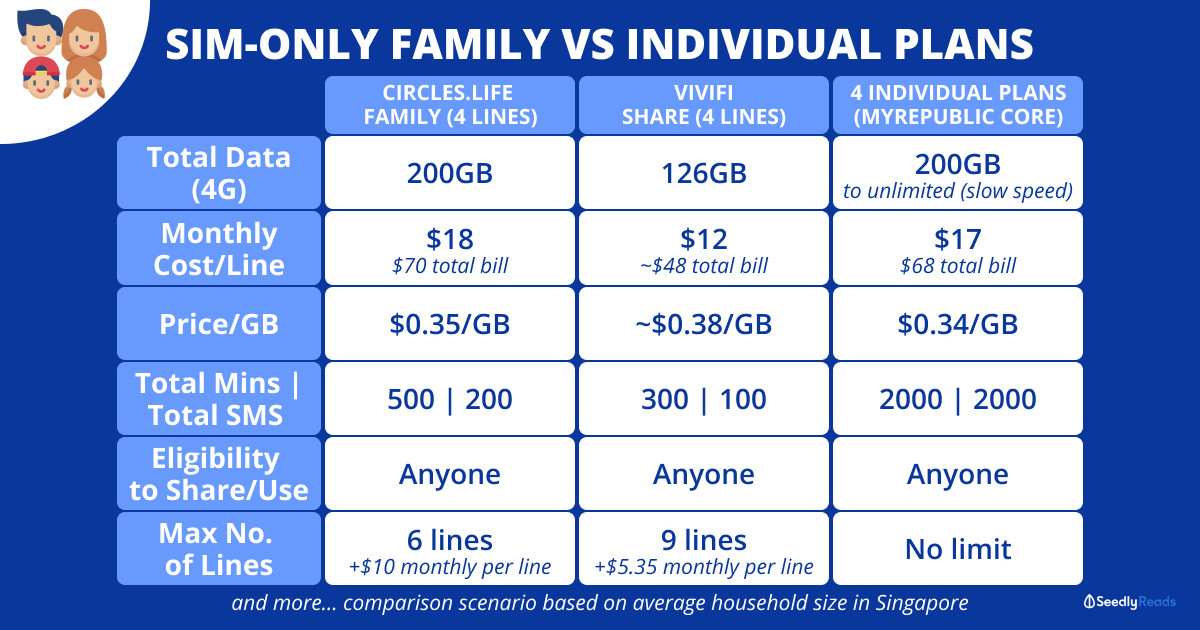 Is a SIM-Only Plan Better Than a Fixed Contract Mobile Plan?

With SIM-Only plans, most come with no contract, so you have absolute freedom to switch to whichever is cheapest.

Or (touch wood) if you, unfortunately, find that your current telco’s reception sucks.

Another thing to note is that most SIM-Only plans will come with no handset as well.

This way, you are avoiding any Early Termination Charges and being overcharged on your monthly subscription.

However, some telcos do a SIM-Only plan AND allow you to purchase a phone that you can pay for in monthly instalments.

Even if you decide to cancel your SIM-Only plan.

If you’re interested, check out Circles.Life to see if this makes sense for you.

So you have a traditional two-year mobile plan that is nearing the end of your contract.

It is collected back by tagging a small monthly premium on your monthly phone bill.

This essentially means that you’re paying for your shiny new smartphone in 24-month instalments.

Introducing… the “SIM-Only Plan And Phone From Carousell” Strategy

With data as the main priority for most of us getting a mobile plan, we have a simple strategy.

To better illustrate this strategy, we looked at the cost of getting an iPhone 13 series phone on a two-year contract with the telcos.

And compared it with a giga! Mobile SIM-Only mobile plan with the same phone purchased directly.

Here’s what we found: 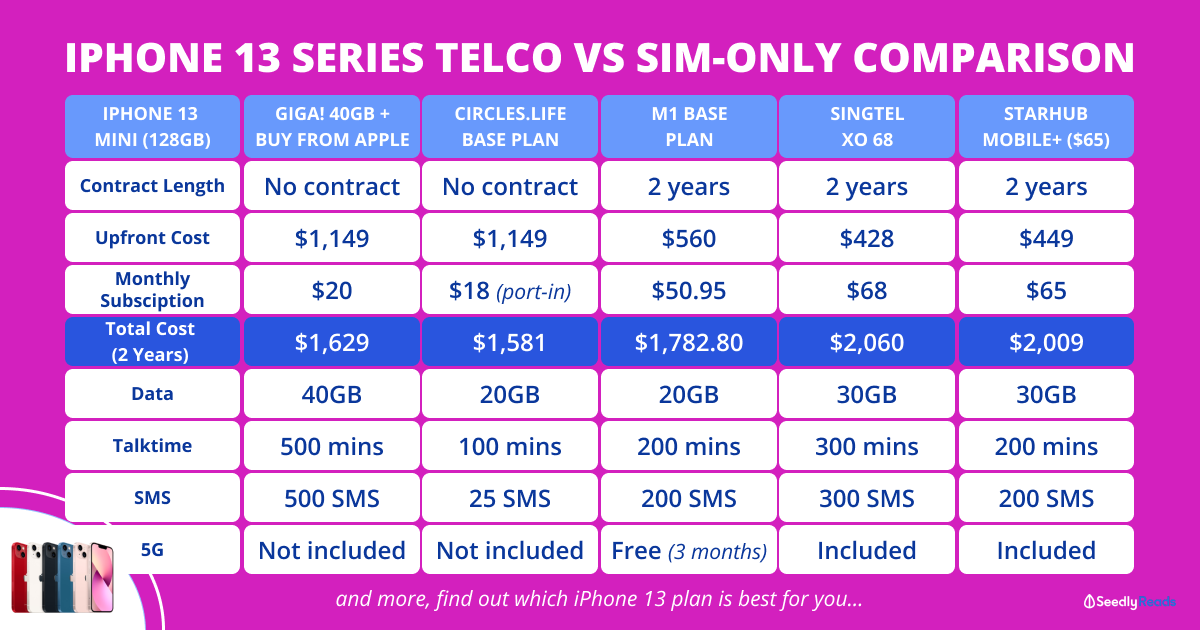 Plus, you’re getting more bang for your buck in terms of data too!

Besides saving on your data plans, you can also save on your expenses when you redeem your CDC vouchers, find out how you can do it now!