Cheapest SIM Only Plans In Singapore 2020: Data vs Price Comparison

Cheapest SIM Only Plans In Singapore 2020: Data vs Price Comparison

Want to Save Money? Then You Should Definitely Switch to a SIM Only Mobile Plan

Are you still with the three big telcos (Mobile Network Operators or MNO) in Singapore: Singtel, StarHub, and M1?

P.S. you do know that you’re just paying for your ‘discounted’ smartphone in monthly instalments spread over your 24-month contract right?

Want to save money but get more data and not be tied down by a 12 or 24–month contract? 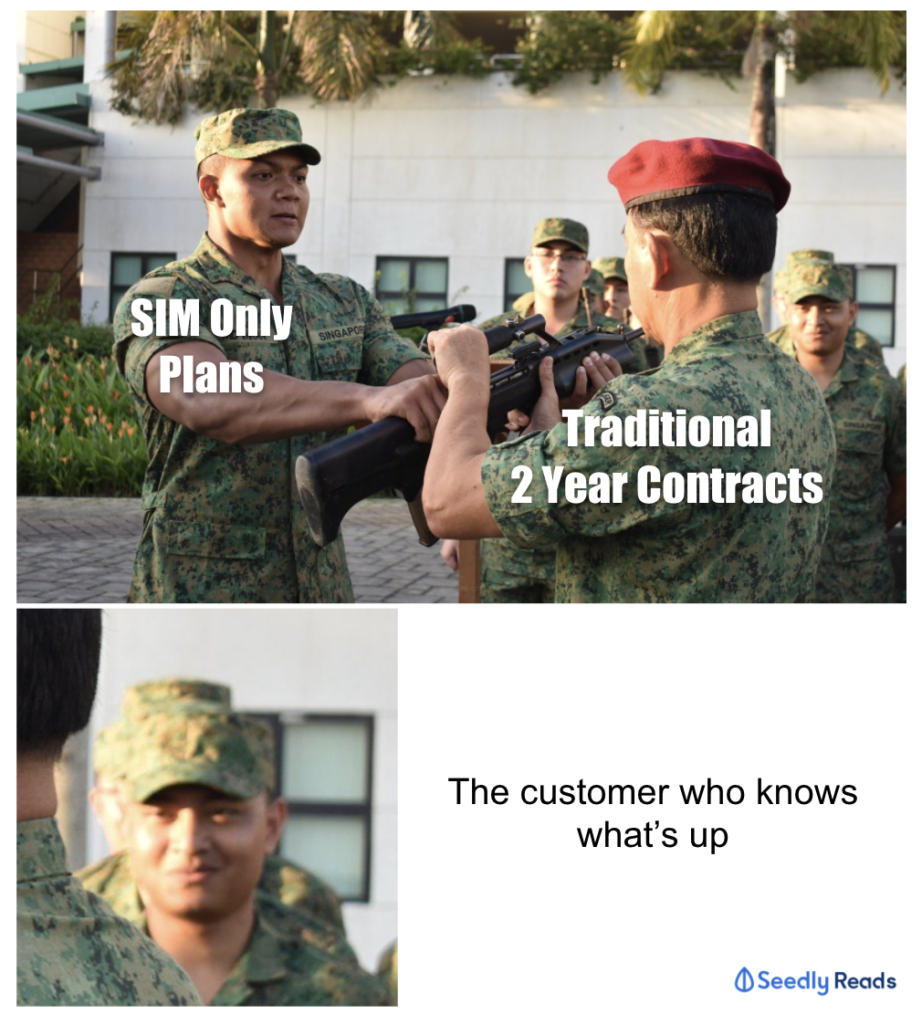 Then you might want to consider getting a SIM Only plan instead.

But apart from the price, did you know that it’s also important to pay attention to which network these telcos are on?

Otherwise, what’s the point of switching to a cheaper plan if it has lousy reception?!

TL;DR: Cheapest SIM Only Plans In Singapore Under $50

There are a total of 13 telcos (MNOs and MVNOs) in the market offering SIM only plans.

For an island with such a small population, this much competition is great news because the prices will definitely be kept competitive.

Here’s a look at the cheapest SIM Only plans in Singapore under $50:

Too many choices and lazy to compare?

Why not just use our FREE SIM Only Price Comparison Tool?

It’ll take you less than 10 seconds to find out which SIM Only plan is the best for you.

What Is A SIM Only Plan?

At the risk of stating the obvious, a SIM Only plan means that you’re only getting a SIM card.

SIM Only plans are postpaid plans and function like your traditional mobile plans.

Except that they’re not bundled with the latest smartphone or discounts.

This way, you can just focus on what is most important to you:

You’re not locked into a minimum contract period.

And are free to switch telcos or mobile plans anytime you like without incurring any penalties.

Why Are SIM Only Plans so Much Cheaper?

You’re probably wondering how are the telcos, who are offering SIM Only plans, keeping their prices so low.

Singapore Telcos and the Network Which They Are On

There are three major Mobile Network Operators (MNOs) in Singapore:

And here are the Mobile Virtual Network Operators (MVNO) aka virtual telcos in the market right now:

The reason why these virtual telcos can keep their SIM Only plan prices so low is because:

Needless to say, once the major MNOs wised up.

They started offering their own versions of SIM only plans back in 2019.

Which Is The Best SIM Only Plan in Singapore?

As with most things which are cheap, the quality of service and reception are some of the things which might be less than ideal.

So if you’re picking a virtual telco’s SIM Only plan, you might want to stick with one that’s tapping on a reliable MNO network.

Here’s a look at who’s on which network:

If you ask me, the best way to find out which is the best SIM Only plan is to ask people who are currently using the SIM Only plans which you’re thinking of getting.

Wondering how you can find out?

Just check out the real-user reviews left by our Seedly Community to get a better idea of which is the best SIM Only plan in the market!

The Best No-Contract SIM ONLY Plans in Singapore

The majority of us who want to switch to a no-contract SIM Only plan want one thing: MORE DATA!

With this in mind, let’s look at the options available.

Best SIM Only Plan For Light Data Users (7GB and Below)

Which means that the XL Unlimited Data Plan is no longer available for new sign-ups.

But if you’re still on it, you’re can still use the plan till your 6-months trial is up.

With data usage capped at 2GB per day, and international roaming available for India.

The best thing about TPG’s trial offering is that it is free — as part of a free trial of their services.

You’ll have to stick to VoLTE supported devices to take advantage of the unlimited calls to local phones benefit.

And have to put with patchy service (sometimes) when you’re underground.

Enjoy it while it lasts.

If you live or travel to and from Malaysia for work in Singapore, then this might be something worth considering.

Because users have access to free data roaming in Malaysia as well as no additional charges for calling and texting Malaysian numbers.

Special mention: Circles.Life SIM Only Base Plan + $20 per month for Unlimited Data

If you take advantage of Circles.Life’s current promo of $18 per month (U.P. $28 per month) for the SIM Only Base Plan.

And pay an additional $20 per month for Unlimited Data.

That works out to be $38 per month for Unlimited Data!

If you’re budget’s a little tight… you could try the latest kid on the block: TPG 50GB SIM Only Plan

FYI: looking at the reviews it seems like reception is a little spotty for TPG, but give the newcomer some time and it should be fully operational sooner than later

The Best 12 Month Contract SIM ONLY Plans in Singapore

If you want to stick with the big telcos.

Then you have to take note as some of their SIM Only plans come with a ‘contract’.

So you have a traditional two-year mobile plan that is nearing the end of your contract.

Is collected back by tagging a small monthly premium on your monthly phone bill.

Which essentially means that you’re paying for your shiny new smartphone in 24-month instalments.

The “SIM Only Plan And Phone From Carousell” Strategy

With data as the main priority for most of us getting a mobile plan, we have a simple strategy.

To better illustrate this strategy, we looked at a Singtel two-year contract plan, which comes with an iPhone 11.

And compared it with a Singtel SIM Only mobile plan with an iPhone 11 purchased separately on Carousell.

Here’s what we found:

The total amount of savings if you went with a SIM Only card and purchased your phone separately?

This doesn’t sound like much, but it’ll pay for at least 3 months of your SIM Only plan.

Conclusion? Switch To SIM ONLY Today!

Just use our SIM Only Price Comparison Tool and try it out for yourself.

Then mark the date when your two-year contract ends to remind yourself!

Oh, by the way, if you wish to save more…

Remember to choose the best home broadband plan too!