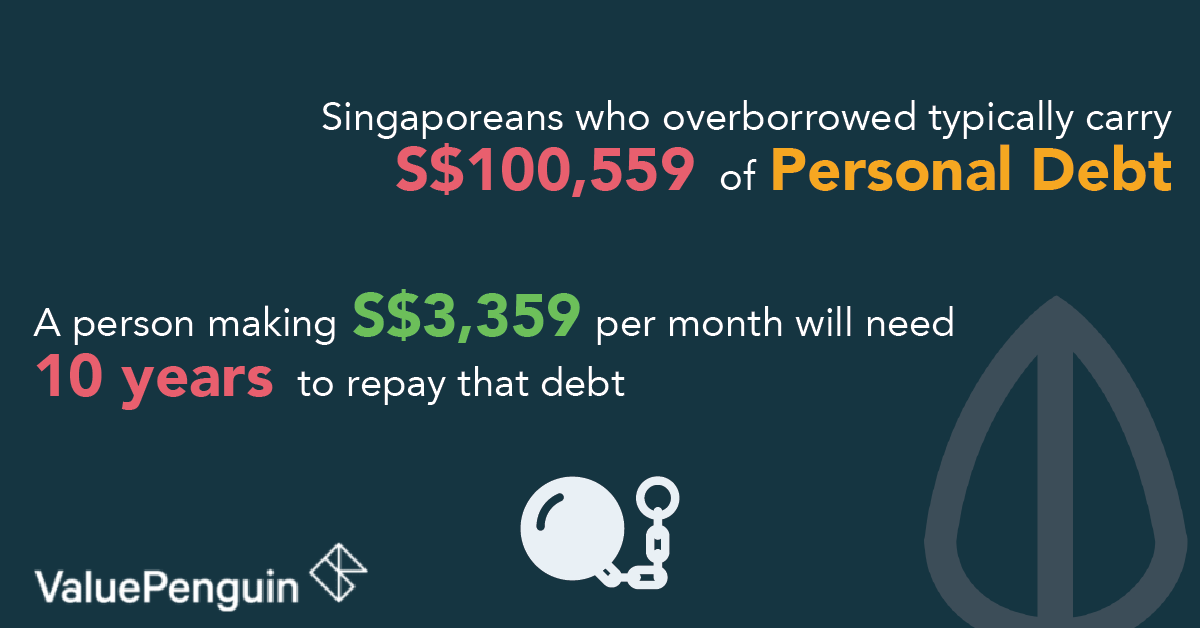 With the rapidly growing mountain of personal debt in the country, the government of Singapore has been introducing many measures to try and control this problem. For example, a bill was proposed in Parliament earlier this month to limit the amount of loan a person can get from moneylenders. Given the latest statistics from Credit Counselling Singapore, it’s not surprising that the government is taking more steps to rein in this problem as soon as possible. According to CSS, these debtors who have overborrowed typically carry S$100,559 of personal debt on average. This was a shockingly large number given that these borrowers earn only S$3,359 of monthly income on average, about 3% of their debt. For people who have borrowed 30x more than what they earn, how long would it take to repay their loans? We’ve made some simple calculations here to demonstrate why these unsecured loans can be so dangerous, and what one could do to alleviate their financial pain from these liabilities.

According to our calculations, a person who makes S$3,359 per month could easily take around 10 years to fully repay his credit card debt and personal loans of S$100,559. This algebra assumes that the borrower reduces his total spending to S$1,442 per month, which could be difficult but definitely plausible given that an average household of three spends about S$4,699 per month. However, this would also mean that he would have paid S$1,917 per month for 10 years for a total of S$230,040 just to pay off S$100,559 of his principal loan amount. Why does he have to repay so much for so long to be debt free? 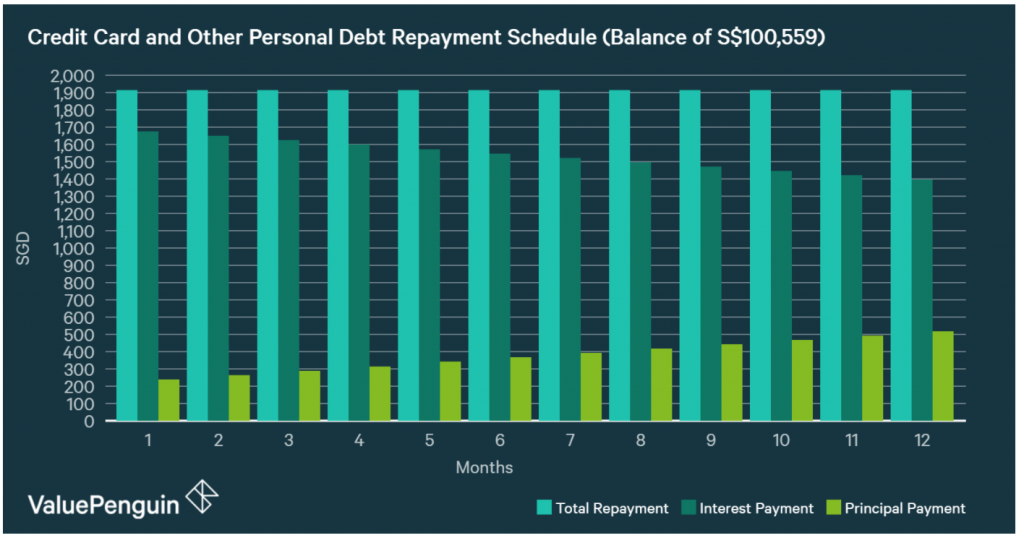 It takes this long because of the extremely high-interest rates being charged on these loans. Most credit cards charge an interest of at least 25% on unpaid balance that are overdue, while moneylenders can easily charge rates that are more than twice that level. Even personal loans from banks charge around 13-15% on average. Assuming that the average of interest rates of all liabilities that a person holds is around 20%, his monthly interest payment alone could be as high as S$1,676 before he is able to reduce his remaining balance. This also means that someone who doesn’t reduce his spending sufficiently could actually end up with a higher unpaid balance even as he continues to repay his loan.

To help people who might be stuck in this kind of situations, the MAS rolled out a new kind of financial instrument called “debt consolidation plan” at the beginning of 2017. To put it simply, a DCP consolidates a person’s high-cost loans into one facility that charges a lower interest rate. For instance, HSBC offers the lowest cost DCP in the market with a fixed rate of 4.7%. This would decrease the interest payment in our example above from S$1,700 to S$394 immediately. Had the debtor utilised this facility to replace his S$100,599 of credit card debt, he would have spent only 67 months and S$173,040 to become debt free, a -44% reduction in both financial cost and time. 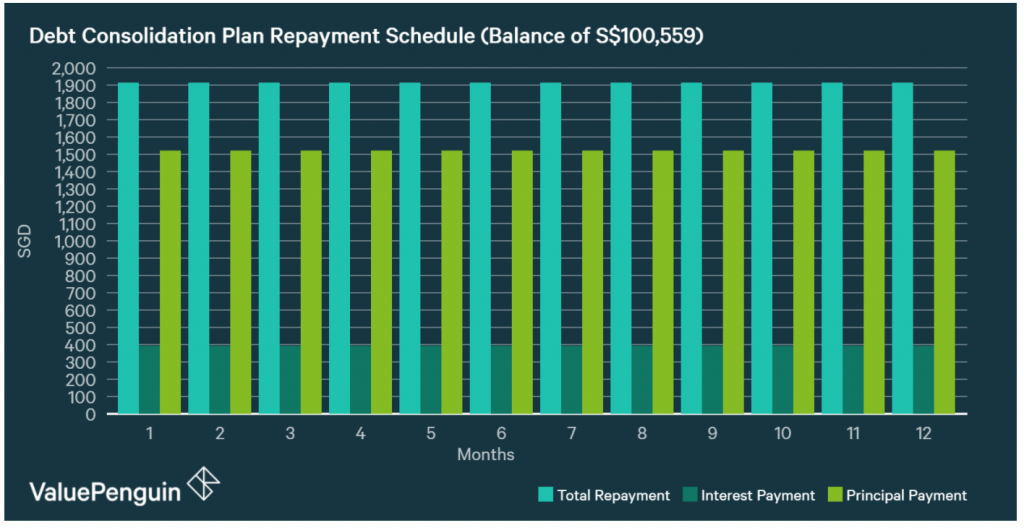 For people who are overloaded with personal debt, it is imperative to significantly alter their spending habits. A lot of these debtors have a tendency to spend beyond their means or even to engage in a lot of gambling activities. These habits are simply destructive to one’s personal finance. Instead, they have to materially reduce how much they spend every month so that they can save enough money to repay their loans. For example, the example debtor above could actually take almost 9 years and S$142,879 to repay his loan even with help of a debt consolidation plan if he continues to spend S$2,000 per month instead of S$1,400 per month.

While changing the way you live and spend could be difficult, it’s possible to do so without drastically reducing the quality of your life. For example, an average Singaporean spends almost S$300 a month on shopping and entertainment related expenditures. Not only that, opting for cooking at home most of the times instead of dining out can reduce one’s living expenses significantly as well.

Further Reading: Hacks to clear your debts fast and effectively

There are usually two schools of thoughts when it comes to debt clearing. The debt-snowball method and the debt avalanche method. 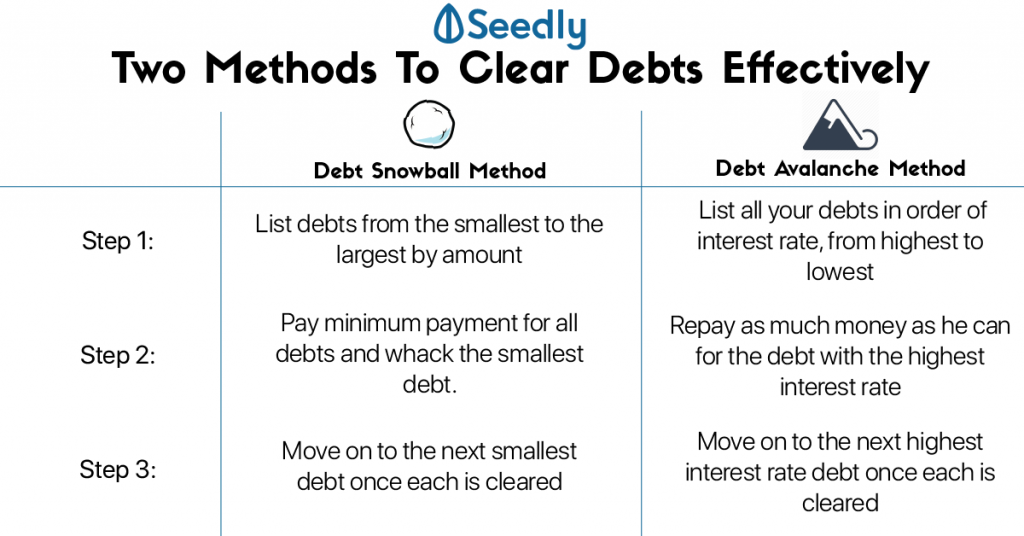 While each method has their pros and cons as mentioned in an article Seedly wrote a while ago, any method that helps an individual clears his debt effectively is a good method.