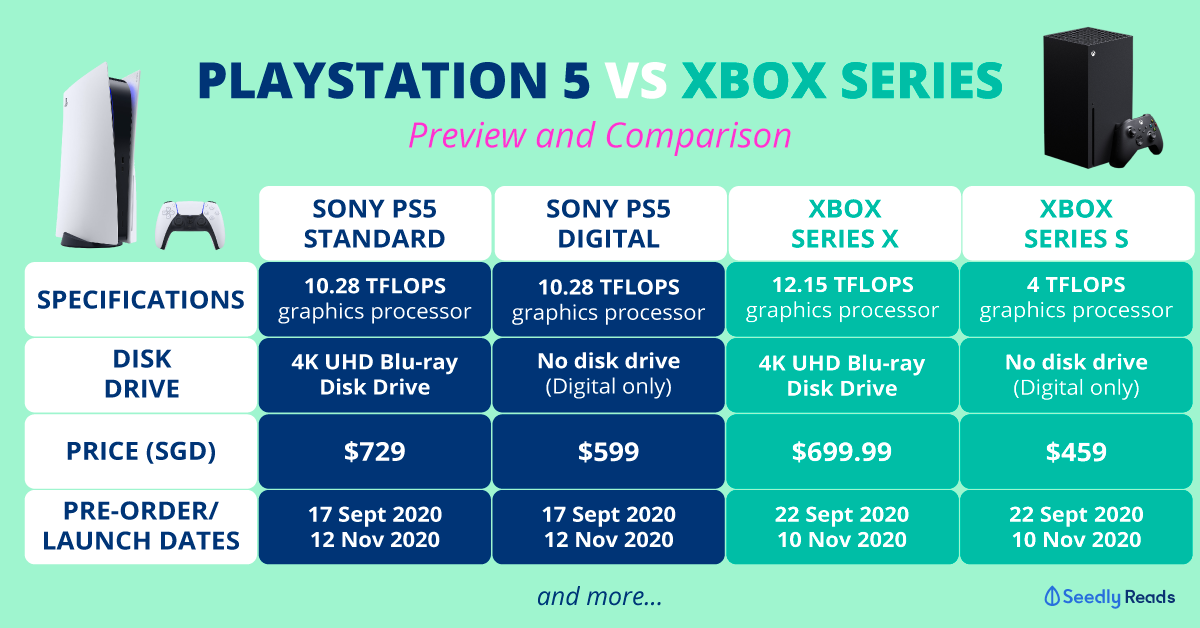 The next-generation console war is heating up.

And boy are we excited.

If you read our game console price comparison, you would know that Sony is currently ahead, as the Sony PlayStation 4 console is the fourth best selling console of all time with an estimated 108.9 million units sold.

While the Microsoft Xbox One way behind at a distant 15th place with only an estimated 46.9 million units sold.

The onus is on Microsoft to take the game to Sony, but which console will be better for you?

Here is all we know so far.

We will be comparing these aspects of both consoles to get a better idea of how they stack up:

As for Microsoft, they will be launching the Xbox Series X and Series S.

When it comes down to the specifications, a comparison will be too premature as the consoles are not even out yet. However, on paper, these consoles are very similar, with the Xbox Series X edging the PS5 with its more powerful GPU.

The PS5 is rated at 10.28 teraflops (TFLOPS) (unit used to measure graphics processing power) and while the Xbox One X is rated at 12.18 TFLOPS.

However, the consoles share more similarities then differences as both use custom processors built by AMD and are capable of ray tracing (a lighting technique and technology that adds more realism to games) and playing games at 4K/120 frames per second (FPS).

I would think that this difference in specifications is more academic as the real-life performance and experience would be rather similar between both consoles.

But one thing is for sure, these consoles are much more powerful than the previous generation consoles.

For the Xbox Series X and Series S, the changes are more pronounced.

In terms of design, the consoles couldn’t look more different.

The Series X is a large box that is designed to stand vertically with a grille on top. In contrast, the Series S shares a similar design to the older Xbox One S. There is also an additional grille at the front which makes it look a bit like a speaker when standing vertically.

The Series X and Series S share the same central processing unit (CPU), but the Xbox Series S runs at a lower clockspeed or 3.8GHz per core vs 3.6GHz per core respectively.

If you would like to expand the console’s storage, both the Series X and S support the 1TB expansion card and external USB 3.0 drives.

The Series X has a 4K Ultra-HD Blu-ray drive that supports game discs and blu-ray movies.

However, there will be no physical disk drive for the Series S.

This is a drawback as you cannot buy used games for the Series S.

PlayStation Asia has confirmed that the PS5 has a Manufacturer Suggested Retail Price (MSRP) of $729 in Singapore.

Edit: A member of the SeedlyCommunity also bought his set from the Sony Store, Bugis for $729 on 18 September 2020. The Digital Edition that comes without a 4K UHD Blu-ray disc drive will retail for a more affordable $599.

Sony has stated that you can pre-order the PS5 at ‘select retailers.’ But, it did not reveal which ones.

A quick search found that you can pre-order the console online from 18 September 2020 from retailers like:

The Xbox Series S will be more affordable, with an MSRP of S$459.

You can pre-order both consoles from 22 September 2020.

Let’s talk about the design and hardware for a second. 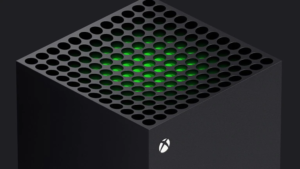 From what I’ve seen of the press release photos and hands-on of Xbox Series X, the design is largely a monolithic rectangular block.

The Series X is designed to be placed vertically and horizontally and features a minimalist design, clean look and smooth matte finish.

The grille at the top for the vents is a nice touch and fits in well with the overall design.

The design is quite functional as you can easily fit the small console which measures 30.1cm tall and 15.1cm deep and wide into most TV consoles.

However, I find that the design is a bit boring.

In terms of the controller, Microsoft has not changed the tried and tested design much.

There is only a slight improvement to the controller’s ergonomics as well as a new share button in the centre. They have also changed the d-pad to an 8-way design and a USB-C connection.

Compared to the Series X, the design for the PS5 is night and day. The more reserved Xbox design in matte black is contrasted with the bold futuristic design of the PS5 in white and black.

Some commentators have noted that this looks a bit like the Xbox 360.

Personally, I prefer the PS5 design as it is more modern and sleek. What I like about the shape of the console is that it just flows naturally kind of like a tulip.

Sony definitely took more risks with this and I think it had paid off.

However, what I don’t like about the design is that the disk drive makes it look thick and unrefined.

However, Sony has yet to release the dimensions of the PS5.

The two-tone colour scheme extends to the PS5’s DualSense controller. Unlike Microsoft, Sony has come up with a fresh new design which is wildly different from the PS4 DualShock controller.

There is a built-microphone. 3.5mm jack and a USB-C connection for charging and the like.

As for buttons, thee share button was revamped to a create button as well as the addition of adaptive L2 and R2 triggers.

Specifications are important and all but what might make or breaks a console for gamers is its platform-exclusive games.

It is still early days but here are the confirmed Xbox series games that will be available at launch:

In addition, Microsoft will also be releasing these games exclusively to the Xbox and PC:

It is still early days but here are the confirmed PS5 games that will be available at launch:

In addition, Sony will also be releasing these games exclusively for the PS5:

This is where Sony fall behind as the Xbox Series X has more backwards compatibility although you can still play many of the older Sony PlayStation games.

The Series X will be able to play all Xbox One Games and some Xbox 360 and the original Xbox games.

What sets the series X apart further is the Game Delivery feature. If you currently have an Xbox One, you will be given the Xbox Series X version of your game when you upgrade.

However, the PS5 will only be able to run PS4 games.

This includes the PS4 Pro titles that were optimised for that console. Currently, Sony “believes an overwhelming majority” of PS4 games can be played on the PS5 and should be available for the PS5 launch.

Looking ahead, the future of gaming seems more and more wrapped up with subscription services.

The Xbox Game Pass has been pretty revolutionary. Dubbed the ‘Netflix of Gaming,’ a subscription to the Game Pass will allow you to play a 100 over quality Xbox games. This includes titles on launch day as well.

In contrast, PlayStation Now adopts a different approach as the service focuses on cloud-based game streaming. You can download some PS4 and PS2 games on PS while PS3 games can only be streamed.

This is the case of the have and the have nots.

The PS5 takes the lead in the area of virtual reality (VR) games as the console will support the PlayStation VR headset and hopefully its library of games. There might be even a new PSVR headset in the future!

In contrast, the Xbox series never had a VR headset and there has been no news about an Xbox Series X VR headset.

Looking ahead, the future of gaming and online games seems more and more wrapped up with subscription services.

The Xbox Game Pass has been pretty revolutionary. Dubbed the ‘Netflix of Gaming,’ a subscription to the Game Pass will allow you to download and play over 100 Xbox and PC games.

In contrast, PlayStation Now adopts a different approach as the service focuses on cloud-based game streaming. You can download PS4 and PS2 games on PS Now while PS3 games can only be streamed.

From initial impressions, the Xbox Series X and PS5 seem to have many similarities, although there is still a lot we do not know about the consoles.

As the consoles become more similar hardware-wise, I would think that it becomes less of a differentiator.

Rather, it is stuff like access to streaming games, the platform-exclusive titles and the gaming eco-system that will make the difference.

The consoles that will be released at the end of the year are not cheap, with the PS5 Standard Edition and Xbox Series X retailing for about $700.

Whereas the Sony PS5 Digital Edition will be more affordable, going for about US$399 (~S$545) while the Xbox Series S is even cheaper, with an MSRP of S$459.

Jump in the discussion and give your take about this issue with our friendly SeedlyCommunity!