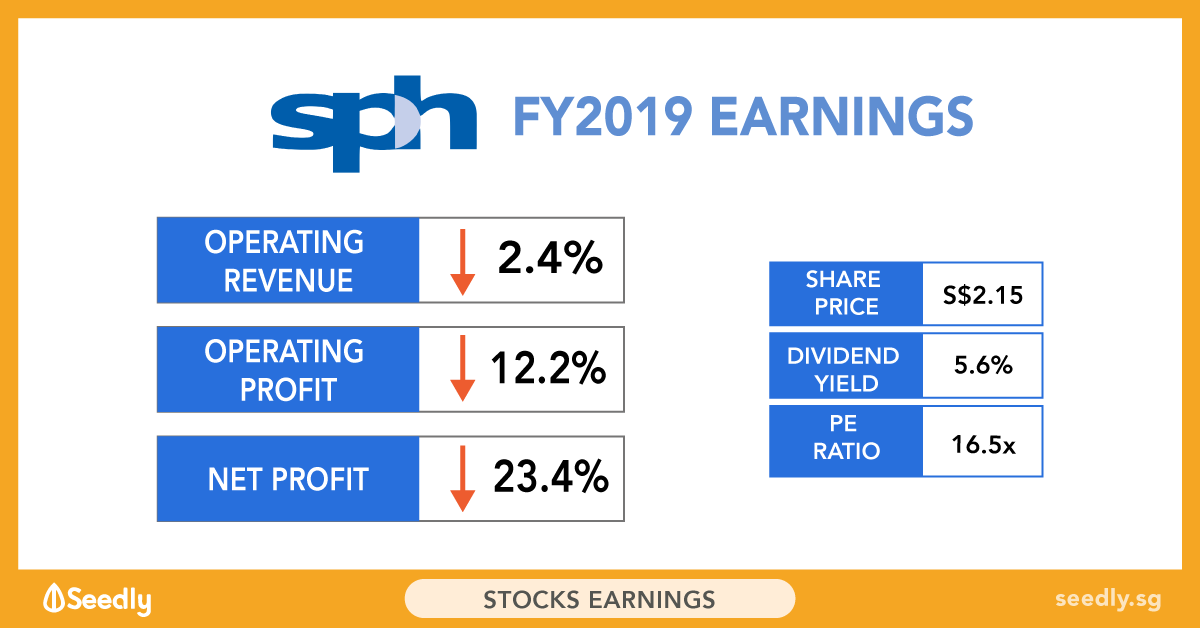 Singapore Press Holdings Limited (SGX: T39) (SPH) is Asia’s leading media organisation with three business segments — media, property and others. It is also the owner of well-known publications such as The Straits Times and The Business Times.

Just yesterday, the company released its earnings for the full year ended 31 August 2019 (FY2019). The media business is still struggling, with no immediate respite in sight. Let’s dive further.

Show Me The Moolah

The following shows how SPH’s different business segments performed for FY2018 and FY2019:

As you can see, the media segment’s revenue tumbled 12% to S$576.9 million, as compared to a year ago. This segment is involved in the production of content for distribution on print and other media platforms such as digital. Housed in this segment is also the advertisements that you see in the papers, both in physical and digital forms.

The decline in revenue in the media segment was due to 1) lower overall print advertisement revenue; 2) a fall in circulation revenue; and 3) the absence of revenue from ShareInvestor, which was divested in November 2018 for S$17 million.

SPH’s property business, in which SPH REIT (SGX: SK6U) is a part of, shone like a bright spark.

To add on to its woes, SPH’s balance sheet continued to weaken.

SPH’s main revenue driver is from media. So, it is worth taking a closer look at that segment. With readers consuming news more and more on the Internet, it’s not easy to see where this business is headed. And that explains the diversification strategy of SPH away from media and into other asset classes such as aged care, and student accommodations.

SPH had tongues wagging again after it made public that it will reduce around 5% of its staff in the media business to restructure and streamline its operations. The retrenchment exercise is expected to cost SPH some S$8 million and be completed by the end of November this year.

Including the interim dividend of 5.5 cents already dished out, the total dividend for FY2019 would be 12 cents per share. At SPH’s current share price of S$2.15, the dividend yield is 5.6%.

The yield looks high, but readers should note that the latest dividend is lower than the total dividend of 13 cents per share given out in FY2018.

SPH’s dividend looks precarious, given that it didn’t generate any free cash flow for both FY2018 and FY2019. Free cash flow is money that the company can use to pay out dividends to shareholders, buy back shares, make acquisitions, reinvest into its business, or strengthen its balance sheet. With a lack of free cash flow, it’s not surprising that SPH has to borrow more to sustain its business.

From The Horse’s Mouth

It pays to watch how the new investments pan out in the years ahead. At SPH’s share price of S$2.15, it has a price-to-earnings (PE) ratio of 16.5 times, which doesn’t look enticing to me given the struggles SPH faces.

Why not check out Seedly’s QnA and participate in the lively discussion surrounding stocks like Singapore Press Holdings Limited and many more!

The information provided by Seedly is for general information purposes only and is not intended to be personalised investment advice.