A Tale of Two Indexes: Why Has the S&P 500 Recovered Faster Than the STI? 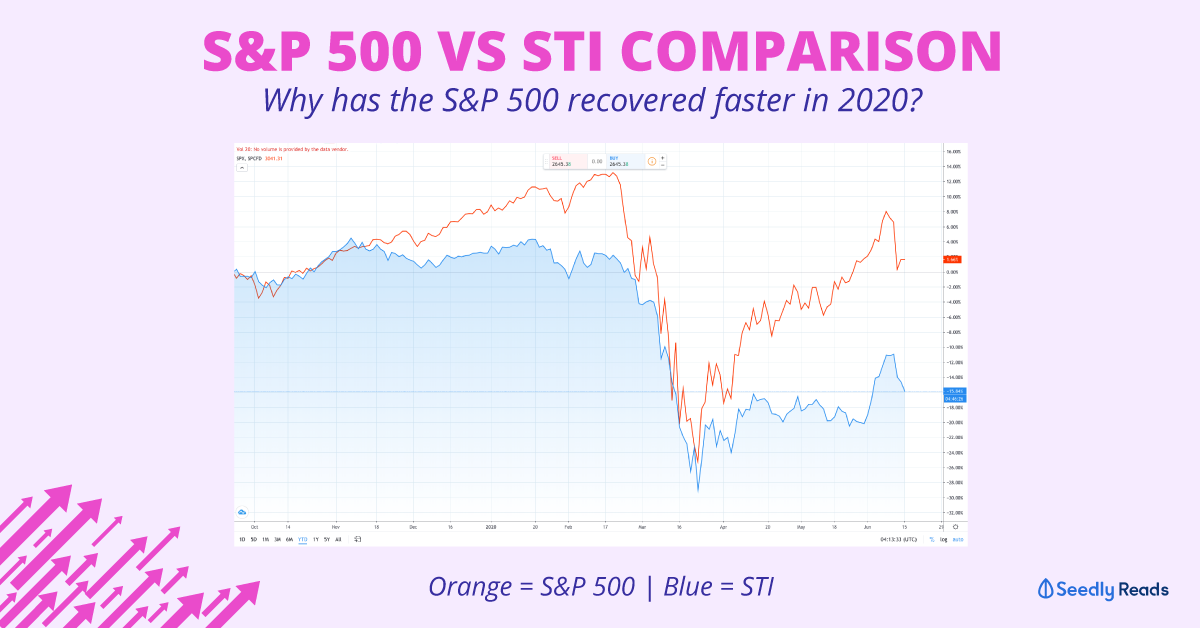 A Tale of Two Indexes: Why Has the S&P 500 Recovered Faster Than the STI?

This is despite the U.S. being ravaged by the COVID-19 outbreak (most cases and deaths worldwide), record unemployment rates, and the 2020 Black Lives Matter protests that broke out after the killing of Floyd George.

In comparison, the Straits Times Index (STI) has not recovered as fast in the same timeframe, only recovering 20.5%. This is the case despite Singapore coping better with the COVID-19 crisis, having lower unemployment rates and political stability.

Safe to say the stocks markets are still very volatile, with CNBC giving up and describing the stock market as a Kangaroo Market.

Thus, I believe this comparison will be beneficial for investors, as understand the underlying reasons why these indexes are recovering at different rates will help you make sense of the whole situation.

In addition, this guide will reveal more about the nature of the Singapore and U.S. equity and the exchange-traded funds (ETFs) that track the
S&P 500 and the ETFs that track the STI.

I will be covering:

Before we start, you will need to have a good understanding of these two indexes.

The index is weighted by market capitalisation, which refers to a company’s total number of outstanding shares multiplied by its share price.

This index is widely considered to be an excellent proxy of the US stock market performance and a good measure of large-cap U.S. companies.

In the other corner, we have the STI.

Created in 1966, the STI is an index which consists of the 30 largest and most liquid companies listed in Singapore. They are also some of the largest companies in Southeast Asia.

These companies come from a mix of different industries and sectors, and they are an excellent proxy of the Singapore stock market.

Aside from being indexes that track the biggest companies in their respective countries, these two indexes cannot be more different.

Firstly, the indexes are worlds apart in terms of size, as the STI’s market capitalisation is about US208.2 billion compared to the S&P 500’s US$26.9 trillion. In other words, the STI roughly makes up about 1% of the S&P500.

But one thing they do share in common is that they are part of the stock market, which is often priced months or even years ahead of the current economy. This explains the separation between the stock market and the real economy.

When it comes to company composition, the index could not have been more different. The S&P 5000 is dominated by companies in the Information Technology, Health Care and Communication Services sectors that make up almost half the index.

In contrast, more than half the companies in the STI index are in the Financials sector.

A major reason why the S&P500 has recovered faster from the impact of COVID-19 is that the companies from the companies in the top three sectors are generally less impacted by COVID-19, and in some cases have benefitted.

Take Information Technology, for example, the most dominant sector in the S&P500.

If you account for the S&P500 companies excluding of the tech sector (using the ProShares S&P 500 ex-Technology ETF), the other companies are down -12.33% from their 19 Feb high.

In order words, despite the technology sector representing a small proportion of the broader U.S. economy, it has a disproportionate impact on how the S&P 500 is performing.

As such, the five technology stocks mentioned have been ‘carrying’ the index with their growth and accounting for a good portion of capital gains made by the S&P 500.

If you compare and contrast it to the STI index, the picture is a whole lot more different.

The triumvirate of banks accounts for about 38.1% of the STI saw their 2020 first-quarter net profit drop:

The banks have been affected negatively by the economic storm caused by COVID-19, and the plummeting oil prices which also exposed Hin Leong’s whopping S$1.14 billion in hidden losses.

Unfortunately, the listed companies in Singapore lack the fast-growing revenue base and global market reach that the top U.S. posses.

So when you invest in the STI, you are largely investing in these banks and Singtel whose sectors (Financials & Telecommunications) have reached maturity or are declining.

Another reason for the S&P500 recovering faster than the STI is the international exposure factor.

Even with the sizeable domestic U.S. economy, the S&P500 is made up of many multinational corporations that generate their revenue overseas.

Thus, the S&P 500 has become increasingly diversified in a sense, with its fortunes tied more to the world economy than the U.S. economy.

The likes of Microsoft, Facebook, Amazon, Johnson & Johnson, Visa and Mastercard are global brands that have diversified their business across the world.

Even though the U.S. has been hard hit by the Coronavirus, many of these companies are still doing well as their profits are coming from overseas.

As such, an upswing in other countries caused by countries reopening can cover the losses from the domestic economy.

Investor confidence in these brands has also been going up as these companies are playing a larger role in our COVID-19 hit world.

As for the STI, although there are some multinational companies that make up the companies in the STI, the majority of them still have a huge portion of their business concentrated in Singapore.

Although Singapore companies have been making the effort to expand globally, they are nowhere near as internationally diversified as the companies on the S&P 500.

Another possible factor for the S&P 500 recovering faster is the U.S. Federal Reserve (Fed)’s monetary policies which include:

On 23 Mar 2020, the Fed announced a huge $700 billion quantitative easing (QE) program committing to purchase an unlimited amount of Treasuries and mortgage-backed securities.

Subsequently, they announced programs to purchase. of risky assets such as investment-grade and high-yield corporate bonds.

In addition, they announced that they would buy even junk bonds which have a higher default risk compared to government bonds.

When the Fed starts buying up financial assets, it will manipulate price signals by lowering interest rates and artificially increasing demand for assets

When this happens, stock prices become inaccurate indicators of a company’s value and investor demand.

The shenanigans with the manipulated prices will then coerce investors to go after stocks that rise in price without the underlying companies increasing their value.

Investors’ confidence might also be buoyed by the expectation that the economy will recover after the expansionary policy is implemented.

An example of this includes a record number of retail investors opening brokerage accounts in the U.S. this year.

In a note, to clients, DataTrek Research co-founder Jessica Rabe points out that:

This includes buying stocks of car rental firm Hertz, a company that filed for chapter 11 bankruptcy.

I would guess that these traders were hoping for the potential upside when the company rebounds despite the huge risk that the stock might lose all of its value when the bankruptcy process is completed.

In contrast, the STI did not benefit from such quantitative easing where the only notable ‘bailout’ was the $15 billion Singapore Airlines (SIA) rescue package.

Another important thing to note is that Singapore’s monetary policy revolves around managing the Singapore dollar’s exchange rate.

Instead, the series of stimulus packages were largely targeted at businesses to retain jobs by providing:

As such, the STI did not directly benefit from this type of stimulus.

What investors can take from this is that indexes and the stock market are not a useful indicator for the economy.

Also, they are a long-term forecast of economic activity.

When investing in ETFs, it is vital that you do your due diligence on the top companies inside the index and the weight of the companies. Investing in an ETF does not mean immediate diversification.

For example, single, large tech companies dominate the S&P 500 disproportionately with banks doing the same for the STI.

Where they differ is that the S&P 500 is considerably more diversified than the STI and possess more growth stocks in the technology sector.

Whereas the STI is less diversified and posses more companies in mature sectors like the Financials sector and Telecommunications sector.

When it comes down to it, I would urge you to stick to your long term investment goals and not try to time the market.

As the late Jack Bogle founder of the Vanguard Group has stated:

No one can know exactly when to exit the market before a crash and when precisely to buy just before a market upturn.

What Are Your Thoughts on the S&P 500 Rallying to Pre-COVID levels?

Why not jump on over to the SeedlyCommunity and participate in the discussion surrounding the stock markets!