"Investing Is Risky" and Other Stock Market Myths

"Investing Is Risky" and Other Stock Market Myths

The investing world is a widely misunderstood one.

That makes it harder for beginner investors to navigate it, making them more confused at the end of the day.

Here are some stock market myths that I’ve come across over the years that I’d like to debunk. 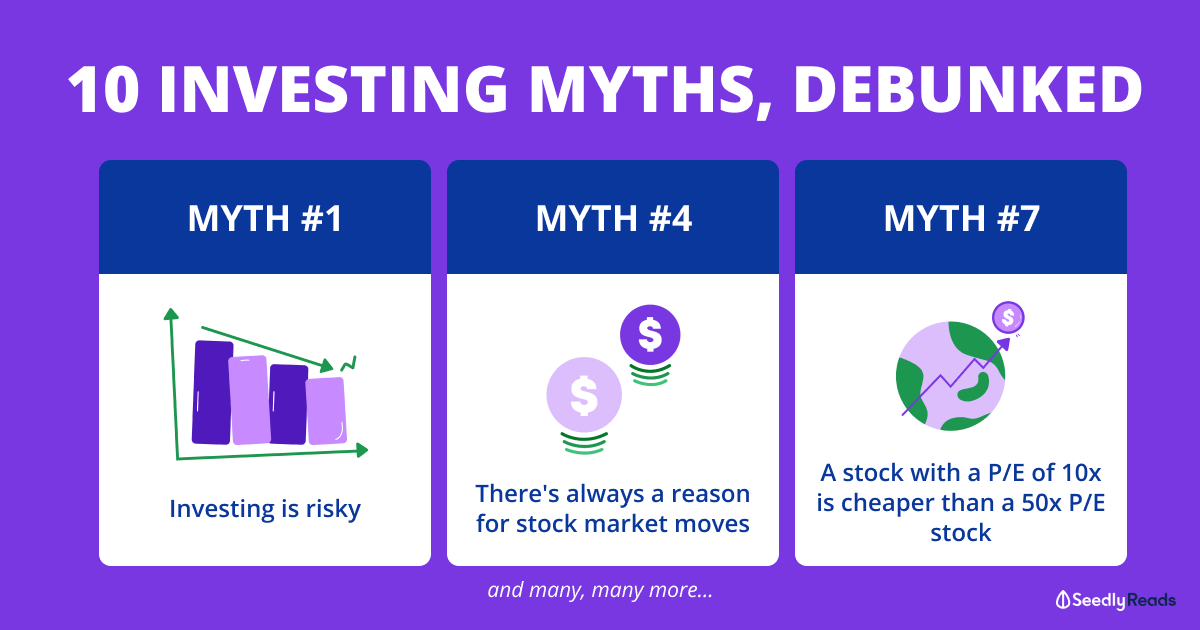 Here are the common investing myths that we will cover:

What is the first thought that comes to your mind when you read such a news headline?

That stocks are risky?

You are not the only one.

One of the most common misunderstandings in the stock market is that “investing is risky”.

Yes, the stock market is volatile (it can fluctuate widely on any given day), but that doesn’t mean it’s risky.

Chuck Akre, whose Akre Focus Fund has produced an annualised return of above 16% since its inception in 2009, said (emphases are mine):

So, the biggest investment risk is losing your money, permanently.

But if you know what you are doing by performing your own investment research, the permanent loss of capital can be minimised.

Myth #2: Investing Is Only for the Rich

We don’t need to be wealthy to invest, period.

In fact, investing when we don’t have much money allows us to make prudent decisions.

I recently talked about Ronald Read, a retired gas station attendant and janitor who was worth US$8 million upon his death.

He didn’t come from a rich background, but he amassed his wealth by maintaining a frugal lifestyle and investing patiently for the long run.

Myth #3: You Need To Be Smart To Invest

A study was done on the Mensa investment club’s performance during a 15-year period between 1986 and 2001. For those who may not know, Mensa is an organisation for people with IQs in the top 2% of the population.

“Investing is not a game where the guy with the 160 IQ beats the guy with the 130 IQ. Once you have ordinary intelligence, what you need is the temperament to control the urges that get other people into trouble in investing.”

To do well in investing, you just need to understand basic mathematics and accounting (which can be picked up easily even if you have no formal education in it) and be able to control your emotions, especially during a bear market.

Humans are wired to find reasons for occurrences.

And it’s no different in the stock market.

Last year, listed technology companies had a heyday, with the tech-heavy Nasdaq almost doubling from the bottom seen in March 2020.

But right now, the Nasdaq and tech stocks are making a pullback.

Is that really true, though? Maybe, maybe not.

What’s true is that nobody knows for sure what’s causing the markets to move up or down most of the time.

Because the reality is, most stock market fluctuations in the short-term come from irrational fear and greed.

It may sound easy to do that theoretically, but it’s tough to do it practically.

No one can know exactly when to exit the market before it comes down and when precisely to buy just before a market upturn.

However, if an investor had missed out on only the 10 best days of the 20 years, the average return would have fallen to 5.5%, meaning the final investment amount would be halved at about $29,000.

From what I’ve gathered anecdotally, many new investors believe that a lesser-priced stock is cheaper than a higher-priced stock.

While this may seem true based on absolute amounts alone, it may not be true if we dive deeper.

This means that a $20 stock may be cheaper than a $10 stock in terms of valuation.

Looking at the above table, Company ABC looks expensive solely from the share price angle.

But when we compare it to its earnings, a different story is painted. Company ABC is actually cheaper in terms of its valuation.

In other words, if you invest in Company ABC, you would need 10 years to get your money back, but for Company XYZ, you need double the time.

(Note: P/E ratio also shows the dollar amount an investor can expect to invest in a company to receive $1 of that company’s earnings yearly.)

So, do not invest in a company just because it “looks more affordable” (Company XYZ) than a quality company (Company ABC), which could actually be cheaper valuation-wise.

This may seem to go against what we just discussed above. But as we have seen earlier with stock prices, we shouldn’t take P/E ratios at face value.

A company with a P/E ratio of 10x certainly looks cheap at a glance. However, it could be trading at a low valuation for a reason. It could be ailing from technological disruption and long-term decline that not many want to invest in it.

On the contrary, a company with a higher valuation, say 50x, could be a high-quality company growing faster than the average companies out there. This would warrant a premium valuation.

One of my favourite authors, Gautam Baid, summed it up perfectly in his book, “The Joys of Compounding”:

“Most of the time, switching from a high P/E stock to one with a low P/E proves to be a mistake. Value traps are abundant and all-pervasive. I have learned to respect the market’s wisdom. Everything trades at the level it does for a reason. High quality tends to trade at expensive valuation and junk or poor quality is frequently available at cheap (or the harmful ‘optically cheaper on a relative basis’) valuation. It took me many years to learn this big market lesson: expensive is expensive for a reason and cheap is cheap for a reason.”

I came to the same realisation as Baid, which I blogged about here, after many years of being a student of the stock market.

Myth #8: You Have To Actively Buy and Sell Stocks To Do Well in Investing

A research paper was published in 2005 titled “Action bias among elite soccer goalkeepers: The case of penalty kicks”.

The paper also revealed that a goalkeeper picks a side and dives 93.7% of the time and stands in the middle merely 6.3% of the time.

There was a clear bias towards action.

With 30% of the kicks right down the middle, the optimal strategy is to obviously stay in the middle.

However, by staying rooted without doing anything, the goalkeeper might feel he is portrayed as being incompetent, thus the need to dive.

The propensity to act even though the action may result in something less desired is termed “action bias”.

In investing, buying something and holding it for the long-term without trading in and out helps your portfolio a lot.

Trading in and out incurs commission cost as well.

So, what’s the next best course of action (or inaction, in this case)?

“If you buy a business just because it’s undervalued, then you have to worry about selling it when it reaches its intrinsic value. That’s hard. But if you can buy a few great companies, then you can sit on your ass. That’s a good thing.”

As if to back Charlie up, in his 2005 shareholder’s letter, Buffett quipped (emphasis is mine):

“…Sir Isaac’s talents didn’t extend to investing: He lost a bundle in the South Sea Bubble, explaining later, ‘I can calculate the movement of the stars, but not the madness of men.’ If he had not been traumatized by this loss, Sir Isaac might well have gone on to discover the Fourth Law of Motion: For investors as a whole, returns decrease as motion increases.”

To increase our stock market returns, we have to decrease our motion. Just like the goalkeepers, we don’t need to “dive” just for the sake of diving.

Myth #9: The Stock Market and the Economy Are Tied

Almost everyone was talking about the disconnect between the stock market and the economy in 2020.

Even though the COVID-19 pandemic was raging, countries were shutting their borders, and the global economy was in shambles…

The disconnect between the stock market and the economy has played out many times in the past, not just in 2020.

Numerous studies have shown virtually no link between the stock market and economic growth over the long-term.

For example, the correlation between annual changes in real (or inflation-adjusted) gross domestic product and annual real returns for the S&P 500, including dividends, was 0.09 from 1930 to 2019.

What this means is that there’s virtually no correlation between the two.

(Note: A correlation of 1 suggests that two variables move perfectly in the same direction.)

So, as investors, what we should do is focus on the business fundamentals of the companies we want to invest in and buy shares consistently over the long-term, no matter what the economy does.

I’ve saved the best for the last.

Warren Buffett profiled a total of nine investors (including himself) in a 1984 speech titled “The Superinvestors of Graham-and-Doddsville”.

The investors invested differently from each other — some had concentrated portfolios, while others owned many stocks. The overlap among these portfolios was extremely low as well.

However, in terms of performance, all of them achieved market-beating returns.

This shows that when it comes to the stock market, there isn’t a single way to invest that will make you wealthy.

You just have to pick a method that suits your personality the best.

The key, though, is to have a business-like approach to investing since behind each ticker symbol lies a breathing, living business.

If you are still looking for a secret formula, you can take a leaf from how Buffett invests. 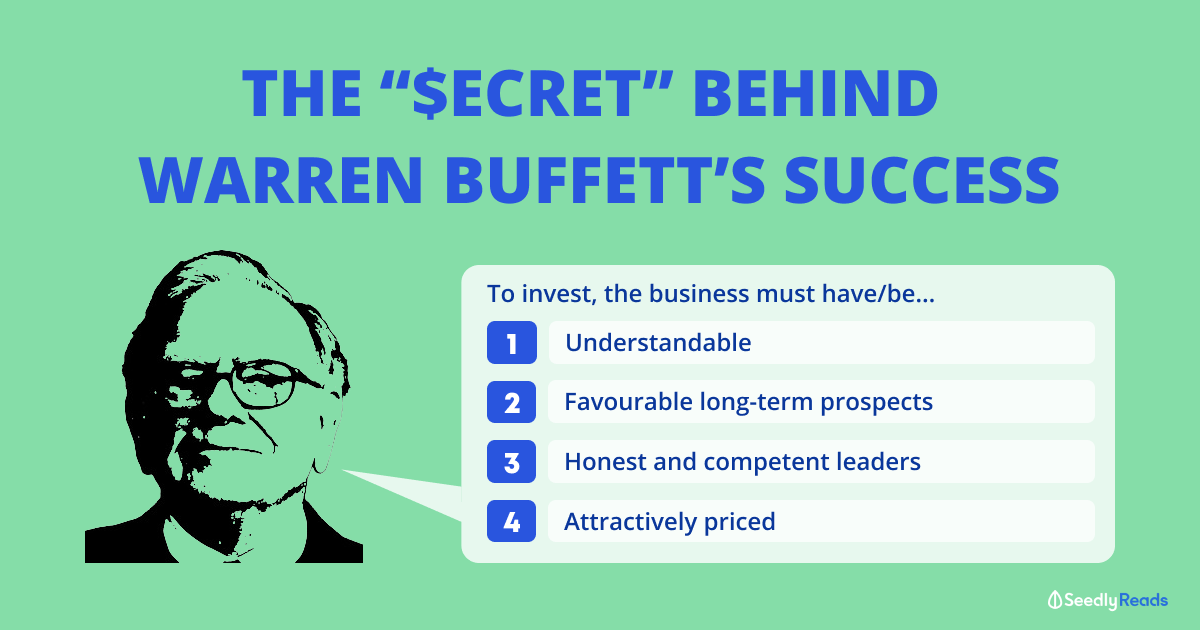