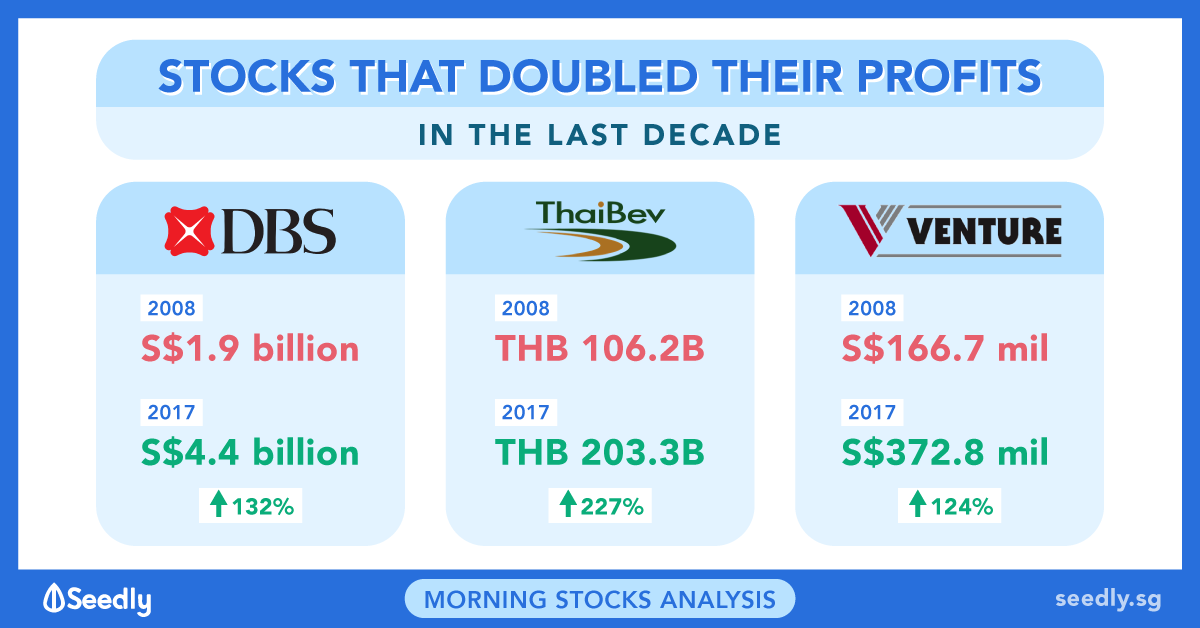 For our Morning Stocks Analysis, the Seedly team worked closely with MotleyFool, who is an expert in the field, to curate unbiased, non-sponsored content to add value back to our readers.

Long term investors seek companies that can sustain, or better still, grow their profitability for the foreseeable future.

As a matter of fact, no one can accurately predict the future, thus, the ability of a company to consistently be profitable over the long term. Thus, average investors might want to limit their investments to those companies that have a more predictable business, or in other words, blue chips.

DBS Group is a company that needs little introduction. Its financial products and services can be found not only locally in Singapore, but also in overseas. In fact, DBS was already a massive company a decade ago, Yet it’s still managed to grow its profitability in the last ten years.

For those who are new to the company, Thai Beverage with the bulk of its operation in Thailand. It operates in four different segments, namely, Spirits, Beer, Food, and Non-Alcoholic Beverages.

Thai Beverage did even better than DBS Group in growing its business over the last decade. Here are the growth figures you need to pay attention to:

As a quick introduction, Venture Corporation is an electronics manufacturing services provider with expertise in a wide range of activities.

Recently, however, Venture Corporation is facing some challenges in its business performance. In its latest quarterly result (for the period ended 30 September 2018), Venture Corporation saw its revenue and profit attributable to shareholder plunged by 27.4% and 27.5%, respectively. The reason given is due to the “impact arising from customers’ planned transition to new replacement products and some customers’ M&A activities for the reported quarter.”

From the above, we can see that though Venture Corporation has been able to grow over the longer term, its short term business activities can be volatile. This is something that investors should note when studying this company.

There you go, three blue-chip companies that have more than doubled their profitability over the decade. Though there is no guarantee that these companies can continue to deliver such performance in the next decade, investors might still want to look into these companies given their past track records.