Supplementary Retirement Scheme (SRS): What Can You Invest in & Everything You Need to Know 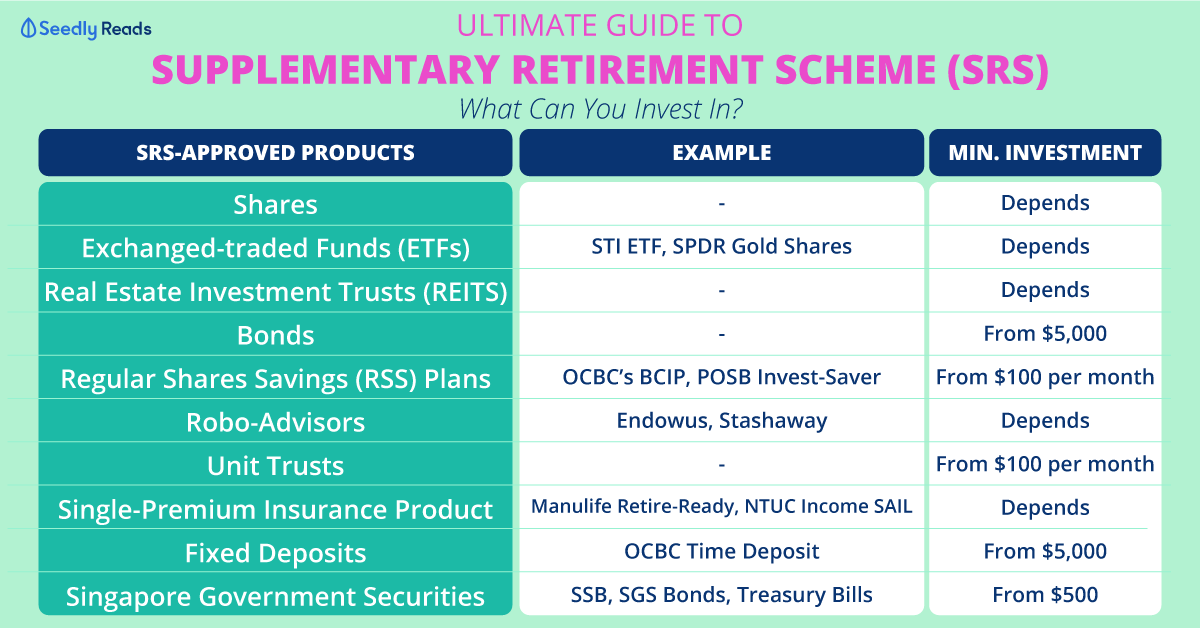 Supplementary Retirement Scheme (SRS): What Can You Invest in & Everything You Need to Know

If there’s anything more complicated than Additional Math…

it’s got to be our Central Provident Fund (CPF).

But as with all things government-related, it’s damn ‘cheem’ until someone bothers to explain in simple terms. And here at Seedly, that’s what we do best.

What’s the SRS for? And should you even bother opening an SRS account?

Should I Open a Supplementary Retirement Scheme (Srs) Account?

If you’re earning more than $40,000 a year, you should seriously consider using the SRS to enjoy tax relief and pay lesser income tax. Even if you’re not earning $40,000 a year, you can open your SRS account and top-up $1 to “lock-in” your retirement age. This strategy is widely used by Singaporeans.

Other than that, you’ll need to invest your SRS funds in order to minimally beat inflation and grow that fund for your retirement.

Reminder: make your SRS contributions before 31 Dec every year to qualify for tax relief in Year of Assessment.

Here’s everything you need to know about the Supplementary Retirement Scheme (SRS):

What Is Supplementary Retirement Scheme (SRS)?

The Supplementary Retirement Scheme is a voluntary scheme to help you with your retirement.

Many of you might be thinking, “Retirement? Isn’t that what my CPF savings are for?”

However, the CPF is an involuntary savings scheme that is only meant to give you a very basic retirement income.

But if you think that you’ll be feasting on buffets every day in your silver years… you’ve got another think coming.

Plus, most Singaporeans will use their CPF accounts to fund the purchase of their homes.

So banking on your CPF savings as a form of retirement is not the best idea either.

This is where the Supplementary Retirement Scheme (SRS) comes in as you’ll be putting aside funds specifically for your retirement.

Plus, if you contribute to your SRS account by 31 Dec of every year, you’ll qualify for tax relief.

You can’t just throw your entire year’s income into the SRS and avoid tax completely because there’s a contribution cap of $15,300 for Singaporeans and PRs.

Oh, and unlike the CPF, you can withdraw your SRS funds anytime you want.

If you perform an early withdrawal before the stipulated retirement age, you’ll be subjected to a 5% penalty. And you’ll also be taxed on whatever amount is withdrawn.

See? Not so straightforward right?

Basically, these measures are put in place to make sure you ACTUALLY put aside the money for your retirement.

SRS, CPF, Or Savings Account? Which Is Better For My Retirement?

I’m sure some of you are already asking if there’re better alternatives to the SRS when it comes to saving for retirement.

Well… It really depends because there’s no obvious answer.

See what I mean?

There’s no clear choice because all three options have their pros and cons.

But let’s focus on the SRS for now.

So… How Much Can I Save With SRS Tax Reliefs?

The biggest advantage of putting money into your SRS account is that you get to enjoy tax breaks.

Other than that, contributions to your SRS account only generate a nominal interest of 0.05% per annum.

That’s similar to the base interest rates you get with most bank savings accounts in Singapore.

And it’s not that great.

FYI: this is unlike funds in our CPF accounts which generate a risk-free interest rate of 2.5% to 5%.

Here’s an idea of how much you can expect to pay in income tax each year:

You’ll notice that there’s a significant jump once your annual income crosses the $40,000 mark.

So if you’re one of the lucky (or unlucky, depending on your perspective) ones earning more than $40,000 a year, you might want to consider opening an SRS account to enjoy some income tax savings.

Maxing out your contribution to your SRS will save you a whopping $1,071!

Note: there is a cap of $80,000 for total personal income tax relief (including SRS contributions)

How Do I Open An Supplementary Retirement Scheme (SRS) Account?

All ready to open an SRS account? Here’s a step-by-step guide to help you with it.

You need to be:

Next, you can open your Supplementary Retirement Scheme account at DBS/POSB, OCBC, or UOB.

You can either apply in person at any of the above-mentioned banks with your NRIC or passport.

Or apply online (much faster):

What Can I Invest With My Supplementary Retirement Scheme (SRS) Account?

So you’ve opened your account and made your first contribution…

Considering that the interest rate is only a mere 0.05% per annum, you might want to consider investing your SRS funds to make your money go further.

Or at the very least not lose its value due to inflation.

If you’re interested to find out more about your options, our Seedly Community has shared some interesting insights as to how to maximise your SRS investment options.

Ultimately, one of the best things about investing using your SRS monies is that your investment gains will not be taxed.

When Can I Make An SRS Withdrawal?

The Supplementary Retirement Scheme is for your retirement, which means that you should make a withdrawal only on or after the statutory retirement age.

That aside, you can also do so on medical grounds or due to bankruptcy.

If you choose to withdraw before retirement age, you’ll have to pay a 5% penalty as well as taxes on 100% of the withdrawn amount.

Well… it’s not called Supplementary RETIREMENT Scheme for nothing.

But if you choose to wait till the retirement age to withdraw your SRS savings, you’ll only be taxed 50% of the withdrawn amount.

Psst! Remember the table above which shows you how much income tax you need to pay a year depending on your annual income?

This means that you can make SRS withdrawals of up to $40,000 a year without incurring any taxes!

Note: this is all assuming that you don’t have any other sources of income though.

Not Sure About SRS? You Can Start By Contributing $1 To Your SRS Account Today…

Still not convinced about how the Supplementary Retirement Scheme can help in your retirement planning?

Well… You should still consider opening an SRS account and contributing $1 to it today. 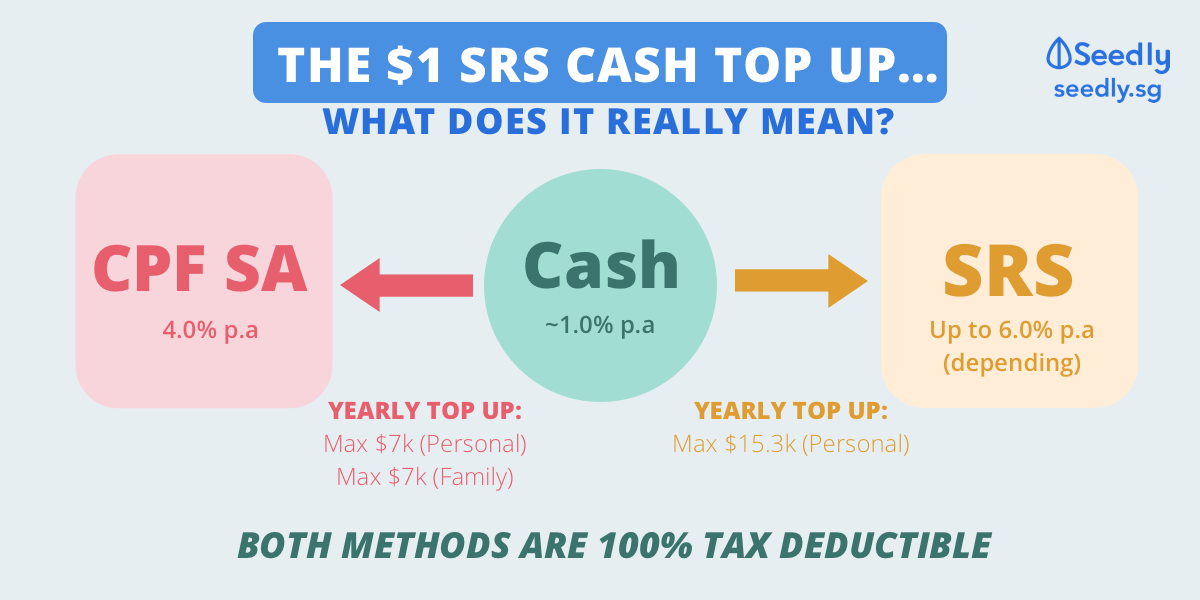 Especially if you’re worried that the government could potentially increase the statutory retirement age in the future.

To make it even easier for you, we’ve even created a step-by-step guide on how to open your SRS account.

But having the discipline to contribute and not perform an early withdrawal is going to be difficult.

Also, the biggest advantage of participating in the Supplementary Retirement Scheme is the fact that you can enjoy tax reliefs.

Other than that, it’s a no-brainer that you’ll need to invest your SRS funds in order to minimally beat inflation and grow that fund for your retirement.