Taking A Stroll With A Cleaner Auntie: "If My Hands Stop, My Mouth Stops Too"
887
shares 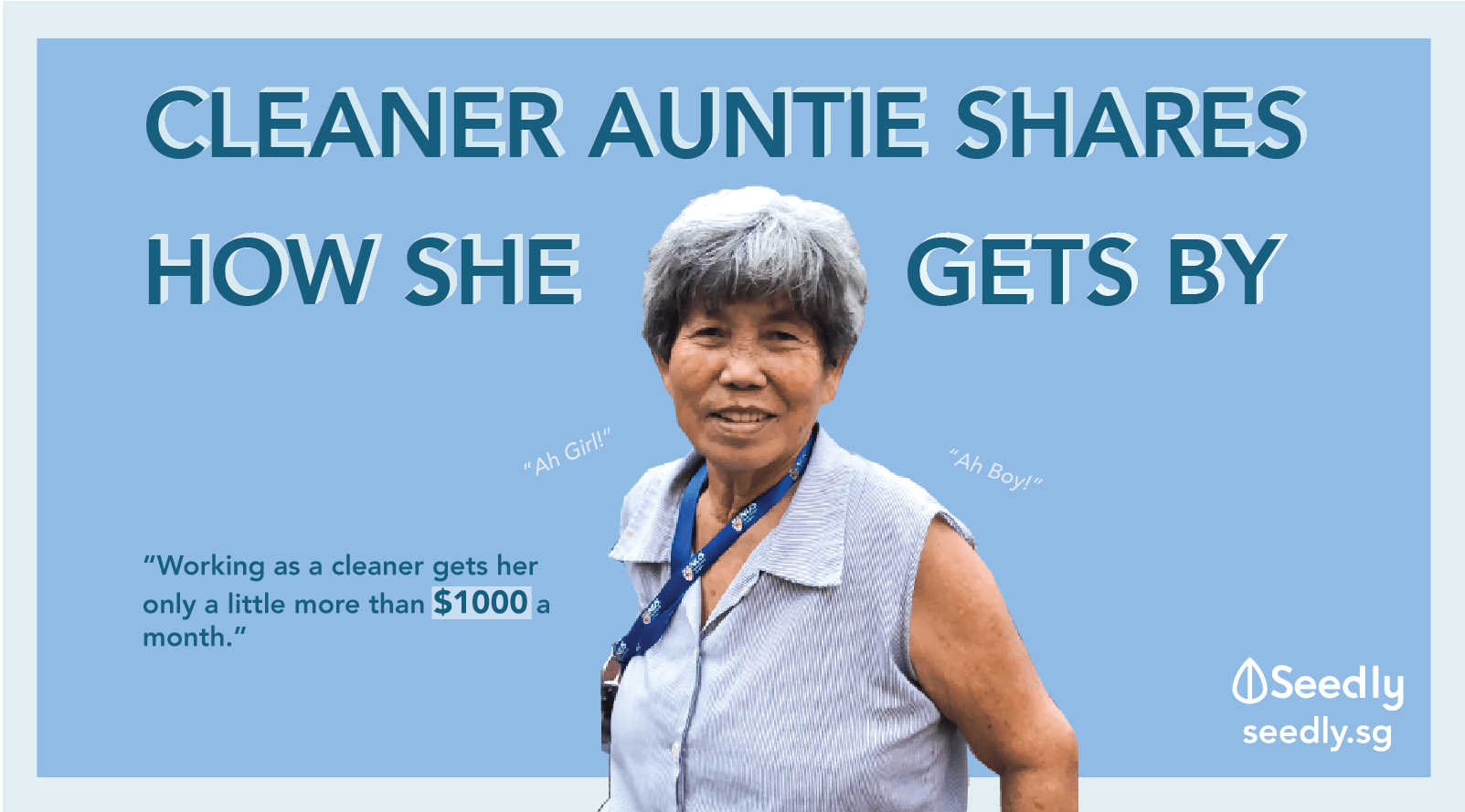 Surely some of us have come across impressionable cleaner aunties and uncles in our lives. Mine would be the Cleaner Auntie who had recently retired from her job at my University’s hostel. She is now 71 and has been working there for 27 years.

Saddened by her sudden departure, I asked Auntie out to chat with me at her void deck one evening. At 6pm, she came down the stairs of the HDB flat in her usual hurried footsteps, fondly calling out to me “Ah Girl!”, with a huge grin on her face. Exactly like how she would back in school.

The plan was to get a cup of kopi with her at the hawker centre nearby. But even before I could suggest that, she took my arm and said “Let’s go get food together!” (In Chinese: Ah Girl 啊, 我们去拿饭好吗？)

Confused, I asked if she meant buying food or collecting food. Turns out, she was off to collect her free dinner from an economic rice store at the nearby market, a dinner sponsored by Happy People Helping People (HPHP). 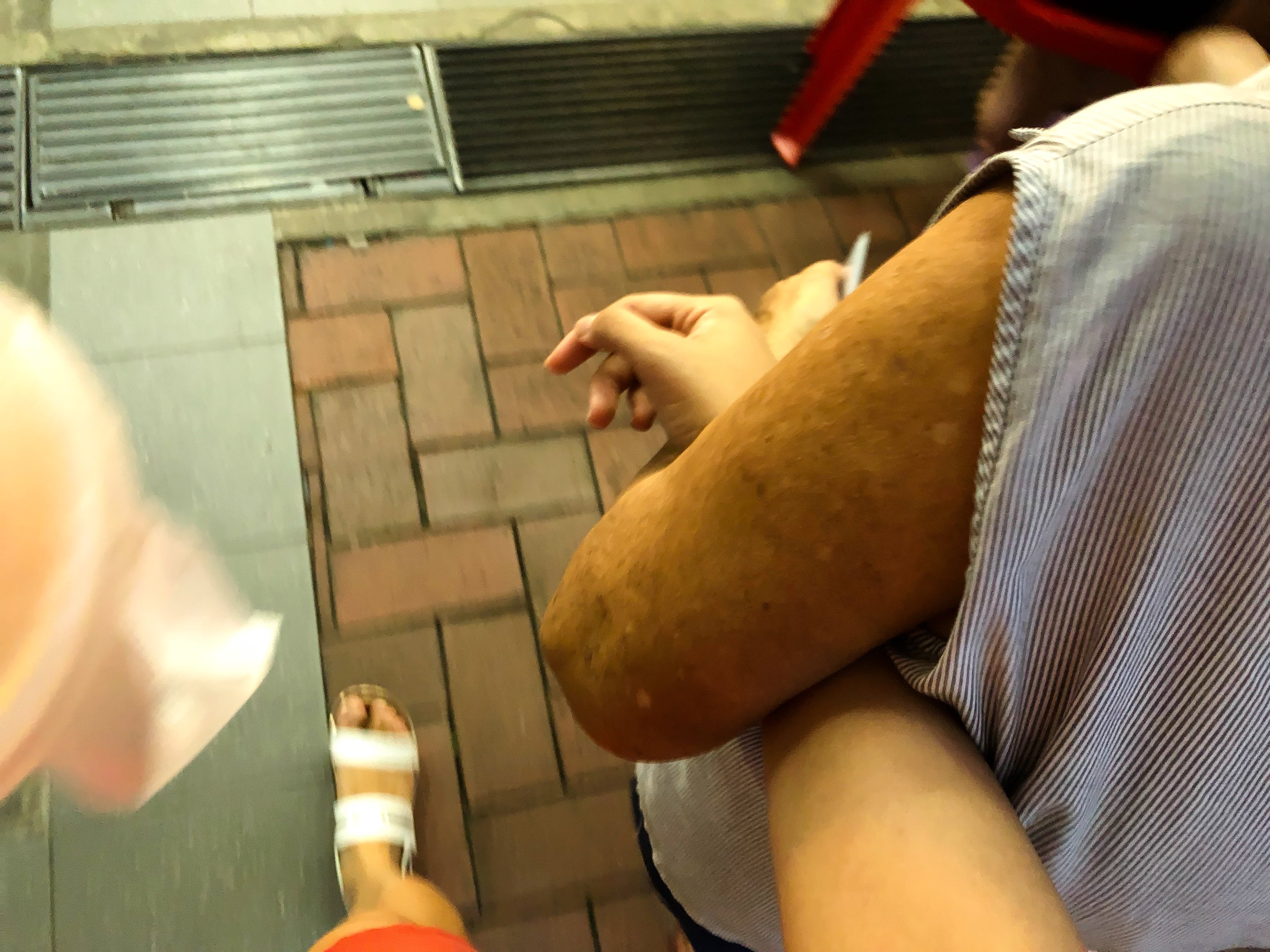 Some of us may recognise Auntie, Mdm Ooi Ah Yang, from the TODAY video and article published last year on how cardboard collectors are receiving help from Happy People Helping People (HPHP).

Having consistently received help from HPHP for 5 years now, Auntie says that Nafiz, founder of HPHP, helps by providing her and her two elderly brothers daily meals and NTUC vouchers, easing the financial burden on basic necessities. HPHP also brings them out on outings almost every month, something that she really looks forward to. Just before meeting me today, she took part in this month’s outing to Gardens By The Bay. 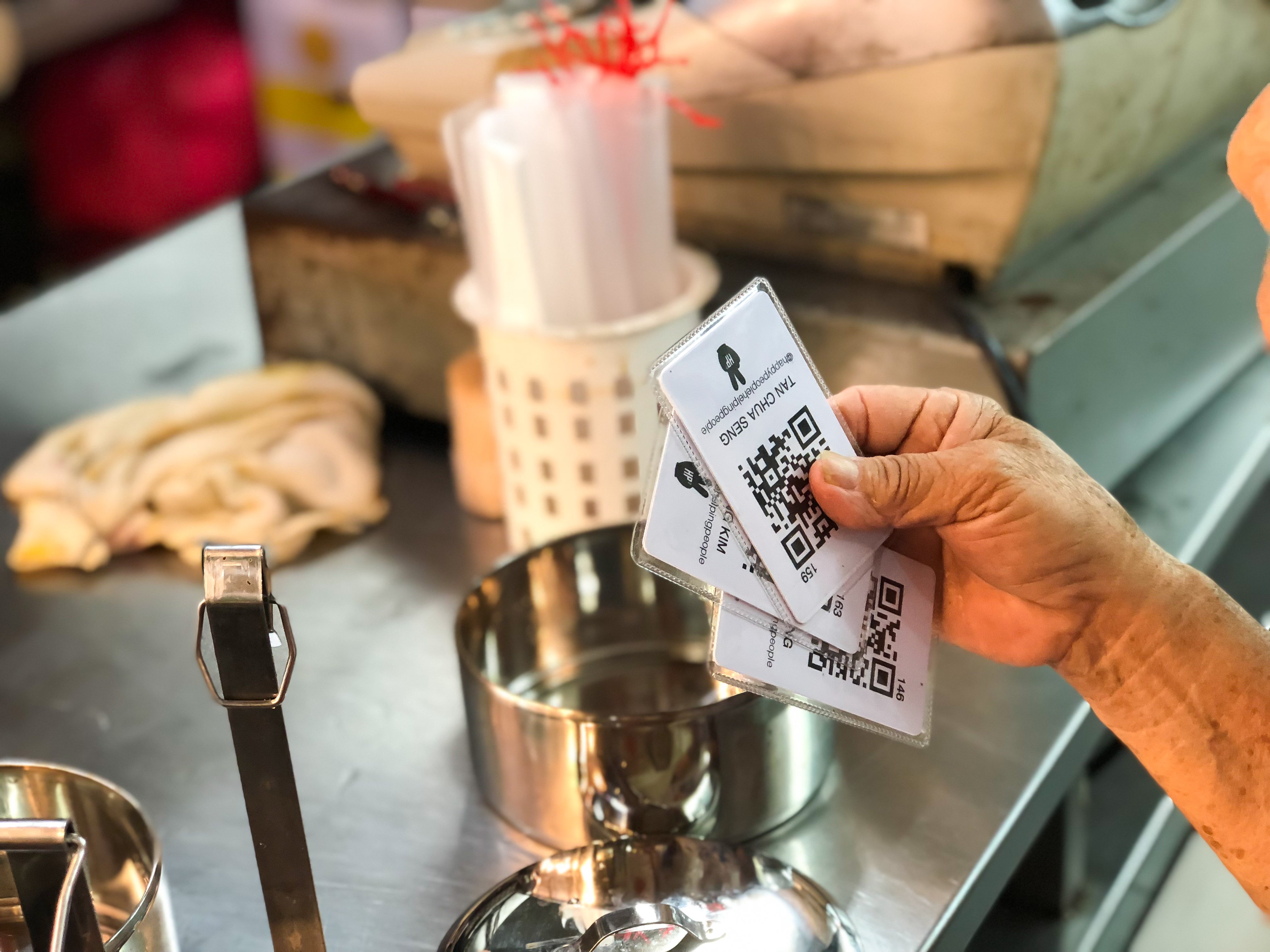 When we reached the nearby hawker centre, she brandished 3 cards with QR codes before me. Apparently, the economic rice store owner scans the QR codes to record usage of the $3 per meal budget sponsored by HPHP. Auntie told me that she could get more nutritious dishes for herself and her brothers such as meat and fish since they have more accumulated value with 3 cards.

So, the HPHP I keep mentioning was founded by Nafiz who noticed the toil of elderly collecting carton boxes and drink cans as a form of income, as well as how little it earns them. He and his team then decided to help ease their financial burden through various initiatives such as the ones I have mentioned above. Living by an empowering quote, “No One Can Do Everything But Everyone Can Do Something”, alongside even more empowering actions, HPHP continues to roll out events to help those who need it.

Other than organisations, Auntie also mentioned many kind-hearted individuals who have helped her along the way. Some of these acts include a young man fresh out of army who voluntarily follows her to pick cardboard on weekends and students who have offered to repaint her house for free. 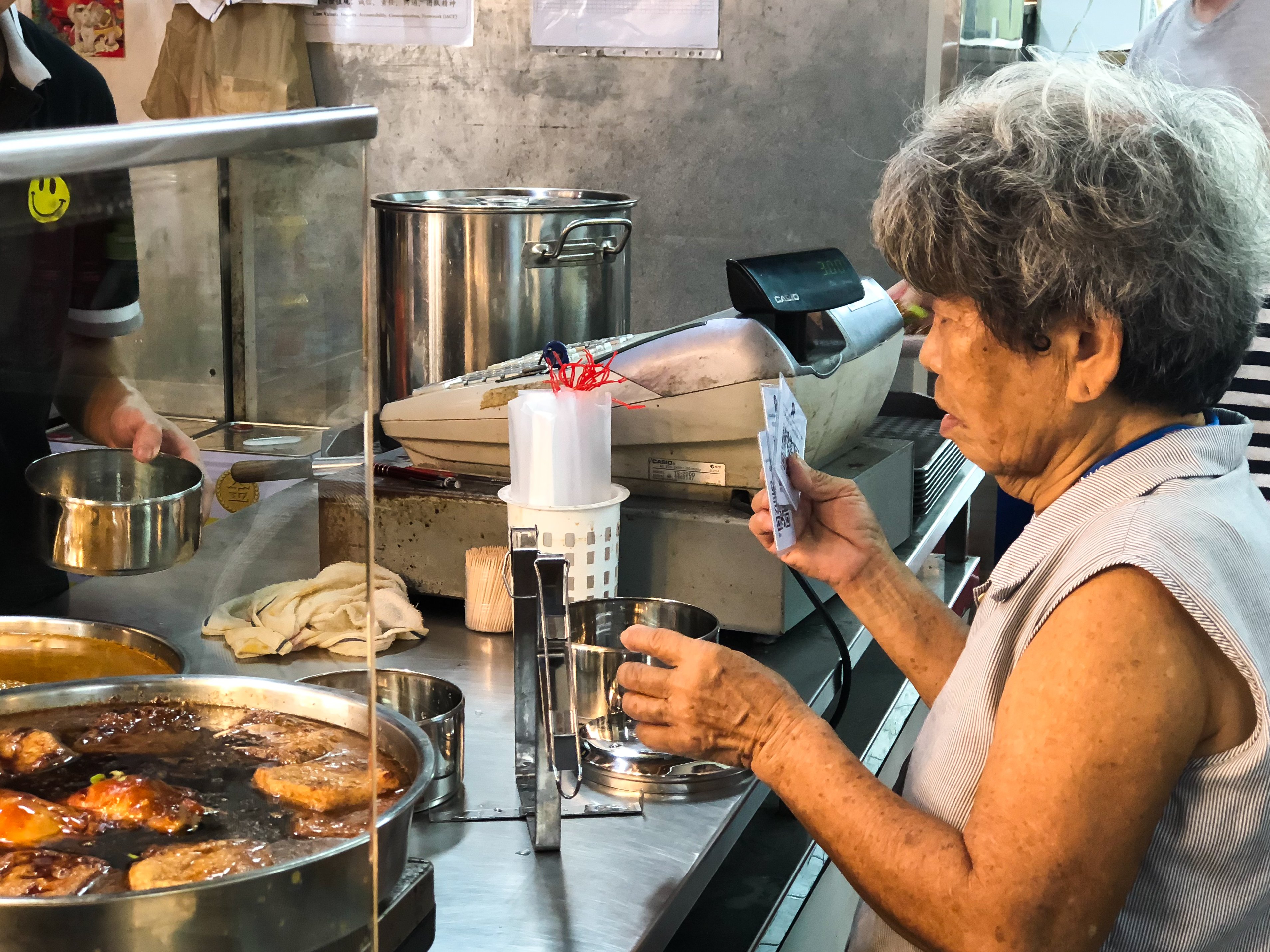 When Auntie previously worked as a cleaner in my school, she told me that on weekends she would help out at one of the market’s vegetable stalls and picked cardboard to sell for extra income. Retirement is still early for the 71-year-old.

Working as a cleaner gets her only a little more than $1000 a month and cardboard picking would typically earn her about $5 a day since one heavy stack of cardboard only sells for 10 cents per kilogram. “如果我手不动，口也不能动”, she said, meaning she has to work hard or she will not be able to feed herself.

I asked about how she got by financially over the years. Auntie shared that in the past, her family was poor so she could only afford to finish her Primary Education. Thereafter, she had to work to make ends meet. Being the older sibling, she also worked to pay for her younger siblings’ education. Auntie mentioned that her parents didn’t earn much and fell very sick when she was in her twenties. So, she worked hard her whole life to earn money to support them and spent time taking care of them. She never had much time for herself, let alone getting married to form a new family of her own.

With little education, she started working as a domestic helper. That, however, didn’t pay enough, so she started picking cardboard to sell at a young age. She briefly counted the years and concluded that she has been picking cardboard for over 40 years now. She said that from a poor family without a good education, she really had no choice but to find laborious, odd jobs to do.

That was what Auntie told me when I asked her what mentality she held onto in life with money always being so tight.

What drove her to work as hard as she could was the money that could secure a more stable life for herself and her family. She tries to save as much as she can in case of any urgent uses. Since her older brother is in frail health, medical bills frequently need to be paid and there is still a sum to fork out even after governmental subsidies.

” I don’t want to be in the situation where I owe people money because I definitely won’t be able to pay them back with my financial situation,” Auntie said to me in Mandarin.

She firmly told me that she had always tried her best to spend within her means or work even harder to earn more so she does not have to borrow money from others. She recognises that if she accumulates any debt, paying it off will be extremely hard given her financial situation. So, she doesn’t buy what she cannot afford.

Auntie also commented that she was thankful there is a government subsidy for her 1 room 1 hall rental flat that houses herself and her two elderly brothers. She pays about $200 in total every month for the rental and bills. 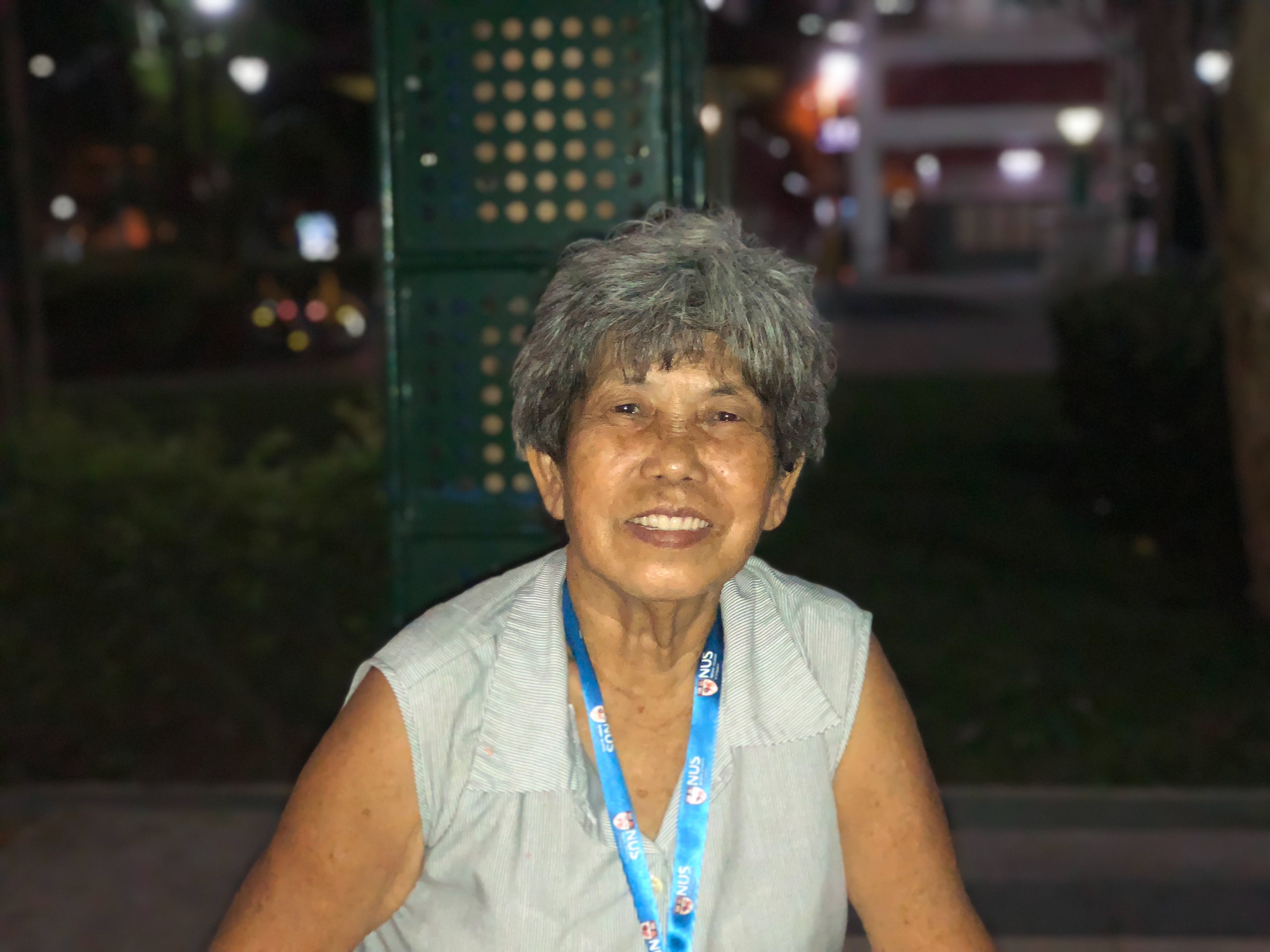 Life And Financial Advice From Auntie

Our talk ran late into the night. Expected though, from Auntie who’s always full of chatter and life when she tells her stories while inserting snippets of her day.

I remember being greeted by Auntie with a concerned ” 吃了没有？” (Have you eaten?)  every morning in school, followed by “好好读书!” (Study hard!) said with a kind smile. These are commonly-used phrases, but filled with a lot of love and care, when she says it loudly to the students with an accompanying grin.

So when I asked auntie what advice she would give young adults, she said that the most important thing to do now is to study hard so we can get a good job and be useful people.

In the length of our conversation today, I saw Auntie put down her strong front when her eyes watered up now and then at the stories of hardships she shared. Indeed, every man his own story, born into the same life yet under such different circumstances.

“If you’re in the luckiest 1 percent of humanity, you owe it to the rest of humanity to think about the other 99 percent.” – Warren Buffet

Let us not forget to do a little extra good for those in need.

It’s good to know the help available for those who need it in Singapore. You never know when you might be able to advice someone or get help yourself.

The Ministry Of Social And Family Development (MSF) and National Council Of Social Service (NCSS) are places you can look for information. The ComCare Public Assistance (PA) Scheme assists those who are unable to work owing to old age, illness or disability and have no means of subsistence and little or no family support via cash grants, and the provision of free medical treatment at polyclinics and government hospitals. The Silver Support Scheme which gives payouts of $300 to $750 every 3 months for elderly with little financial support.

Community Centres and Meet The MP Sessions are also avenues where the needy can seek help for any urgent financial assistance or if there are any queries of the available schemes according to household income.

Meals on Wheels helps frail and homebound elderly by saving the trouble they have to go through to get food. For a cost of $2.50 per meal, Singapore Senior Citizens and Permanent Residents can request meals that cater to their specific dietary requirements. Seniors must be 60 years or older and have a total household income that is less than $1,500 per month or less than $450 per capita (per person per household) to qualify.

Temporary Loan Scheme (TLS) are also available for seniors to buy a new flat without being tied to a long-term mortgage loan. Applicants can apply for this at a prevailing non-concessionary interest rate, provided that a new flat has already been booked and the applicant has sufficient CPF/cash proceeds from the sale of the existing flat to pay for the temporary loan.