Did Tesla's Battery Day Live up to the Hype?
51
shares 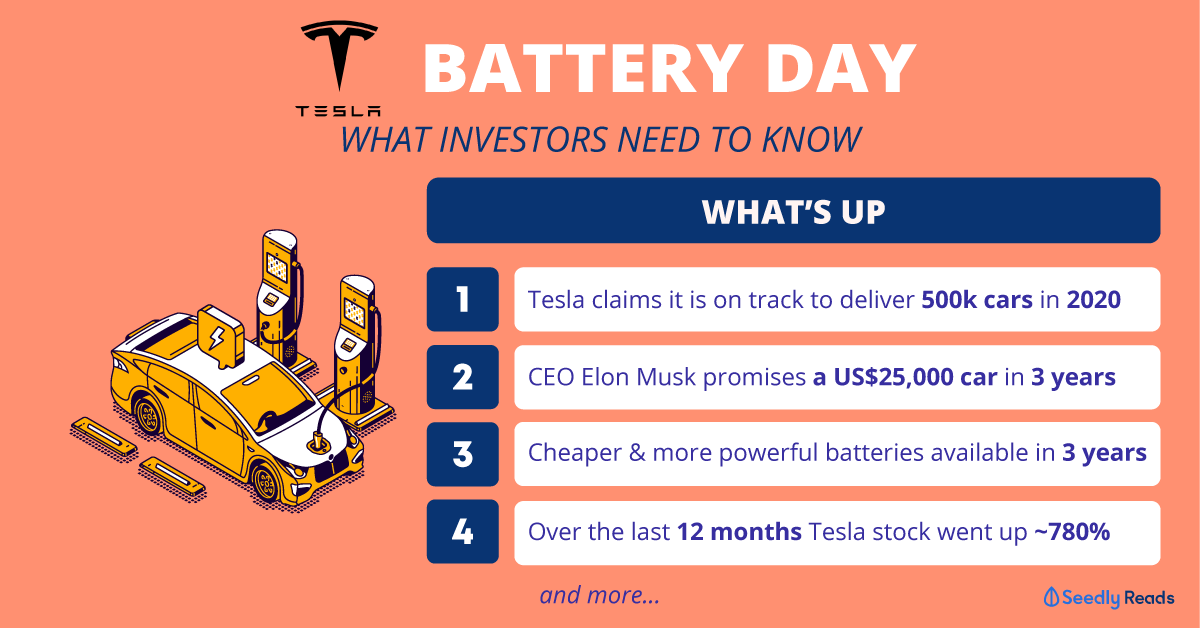 And no, I’m not showing you a photo of a random parking lot.

This is an actual scene from the socially-distanced outdoor event, where about 240 shareholders attended in Tesla cars.

At the event, CEO Elon Musk announced some battery technology innovations, increased efficiencies, a new Plaid powertrain for the Model S as well plans to produce a US$25,000 car.

1. Tesla’s Battery Day Did Not Live up to Investors’ Short-Term Expectations

The hype for Tesla’s battery day was unreal as Musk promised groundbreaking technological advances, and stated that the event will be “one of the most exciting days in Tesla’s history.”

Investors were eagerly awaiting Battery Day as they hoped Tesla would unveil finished technological advances that would greatly extend its competitive advantage, against a whole host of new electric vehicle (EV) competition from start-ups and traditional auto-makers.

However, right before the event, Musk tempered expectations with a customary tweet. He tweeted that mass production of the announced battery technology improvements will not happen until 2022.

He added that even if this were to be achieved, there might still be shortages.

“the extreme difficulty of scaling the production of new technology is not well understood. It’s 1000% to 10,000% harder than making a few prototypes,”

Although Musk is claiming this, other carmakers would have an idea of what he is talking about. Generally, carmakers will take years to develop prototypes for new designs and iron out any manufacturing issues before high-volume production is attained.

This tweet could have spooked investors, as the company’s stock fell 5.6 per cent to US$424.23 after the close of Tuesday’s regular trading session.

Bearish critics of Tesla would point to today’s Battery Day as the newest example of Musk promising lofty technological breakthroughs that might only be realised a few years down the road.

As according to Musk, the implementation of the improvements announced during battery day will take more than a year, and could take three years for full realization.

To understand the significance of the battery technology announcements, you would need to understand a bit about Tesla’s business.

The chart that you see here displays the company’s total revenue categorised by the following business segments:

In the short-term, the company is still very reliant on its automotive sales, which account for about 80 per cent of its total revenue. For context, the company generated US$5.1 billion of sales in Q2 2020.

As of Q2 2020, the other business segments represent a small but growing portion of total sales revenue.

Thus, it is clear that for the short-term at least, the company’s EVs are key to its growth.

Batteries are key to the adoption of EVs.

Although the average prices of EVs have been dropping over the years due to improvements in battery technology, EVs are still less affordable than fuel-powered internal combustion engine (ICE) cars.

This is largely due to the cost of the battery, which is estimated to take up about 1/4 to 1/3 of an EV’s cost.

EV analysts have estimated that for EVs to match regular ICE cars in value, the cost of producing a battery pack will have to be reduced to US$100 per kilowatt-hour (kWh).

According to EV consulting firm Cairn Energy Research Advisors, Tesla’s battery pack’s production cost in 2019 is US$156 per kWh, which will put the cost of a 75-kWh pack found in the long-range Tesla Model 3 to be about US$11,700.

To put this into context, Tesla’s EV competitors are producing battery packs that cost on average about $200 per kWh in 2019.

At the event, Musk announced ambitious plans, claiming that in about three years time, Tesla will be able to cut the cost of Tesla’s batteries by about half. 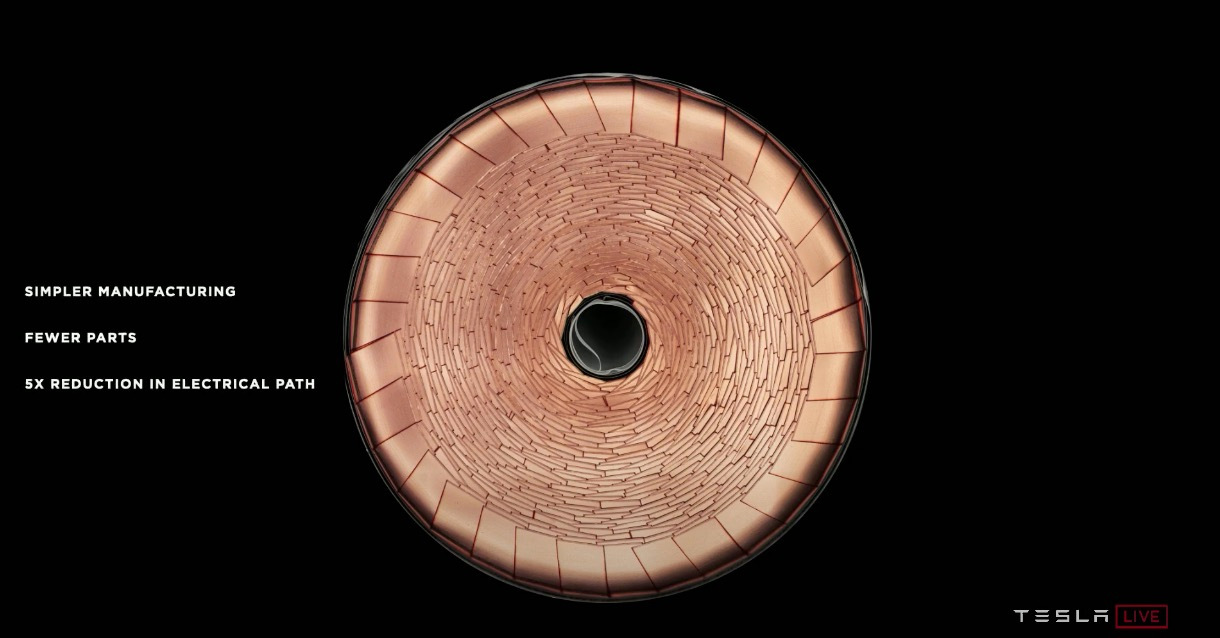 Source: TeslaTo achieve these goals, Tesla plans to develop and manufacture ‘tabless’ batteries that will enhance its EVs range and power.

The purported ‘tabless’ batteries are made by removing the tab that connects the cell to what it supplies power too. This technological improvement will result in five times more energy, six times more power and increase range by about 16 per cent.

More importantly, this will help the company cut down its battery pack’s production cost.

This is also a move to achieve the company’s goal of vertical integration, which will further extend the competitive advantage Tesla has over the rest of the industry.

The company is looking to produce as much of the car as possible in-house, by manufacturing its own batteries, processing the raw materials and even buying lithium deposits still in the ground.

Another key thing that was announced is that Tesla plans to build a new cathode plant for its batteries in the US.

If realised, the company estimated that this new plant will reduce cathode production costs by about 76 per cent and reduce supply chain costs too.

In addition, the company also announced that it will eventually stop using cobalt in its cathodes, which Musk claims will significantly reduce the cost of production for Tesla’s batteries.

The move away from using cobalt is also for ethical reasons, as the cobalt mining industry is tainted by abuses of human rights in the mining process.

Ultimately, these moves made to reduce the cost of Tesla’s batteries are geared towards an ambitious end goal to manufacture a US$25,000 EV.

This will undercut traditional fuel-powered cars by about US$10,000 and might possibly drive widespread adoption.

“It’s absolutely critical that we make cars that people can people can actually afford,” he said. “Affordability is key to how we scale.”

Affordability for EVs is still a concern.

However, this is still higher than the average price of a regular fossil-fueled ICE vehicle which retails for about $36,600.

If you are getting a sense of deja vu, I don’t blame you.

Back in 2018, Musk promised that Tesla would produce a $25,000 EV, which he said was possible within three years.

In addition, Tesla announced that it will start pre-orders for the new Tesla Model S ‘Plaid’ which will retail for US$134,490.

In comparison, the Porsche Taycan Turbo S, with its 751 horsepower takes 2.6 seconds to complete the same 0-96 km/h; maxes out at 260 km/h and will be able to traverse 333 to 463 km on a full charge depending on the drive mode selected.

Also, the Taycan’s retail price is more expensive starting at US$150,900 in the United States.

Musk added that the first Tesla Model S ‘Plaids’ will be delivered by the end of next year.

Bonus: What Investors Need to Know

Unfortunately, Tesla’s Battery Day did not provide the immediate jolt that short-term investors or traders were looking for.

But, in the long-term, investors are in for a bumpy ride if they invest in the company.

If the company keeps growing at this spectacular rate, it will soon become one of the biggest companies in the world.

This points to the stock being fundamentally overvalued.

But, in Q2 2020, the company reported earnings of US$2.18 per share on revenue of US$6.04 billion which exceeded analysts predictions.

This was achieved despite having its principal manufacturing plant in Freemont California shut down for six weeks due to the COVID-19 lockdown in the US.

After the Q2 2020 earnings were released in July 2020, and the five-for one stock split was announced for 31 August, the stock price spiked.

Another significant milestone was that Q2 2020 was the fourth-straight quarter of profitability for the company; a requirement to enter the S&P 500.

But, the company’s stock price fell 33.7 per cent from its peak on 31 August to 8 September, after it was surprisingly omitted for the S&P 500 in favour of Etsy (ETSY), Teradyne (TER) and Catalent (CTLT).

More importantly, Tesla is confident that it can produce more than 500,000 EV units this year, with full production of the Model 3 and Model Y resumed.

There is also strong demand for the Model 3 in China and its factory in Shanghai is running well.

Not to mention that the company is also in the middle of building plants in Berlin and Austin Texas.

But, on balance, this bull case is based on the assumption that Tesla will be able to keep up its spectacular success.

If Tesla can eventually build on its position as a leading EV maker, find success with its robotaxi efforts and expand its other business segments; the company might just about justify its massive market cap of US$395.3 billion.

For context, Tesla is number 10 on the list of the biggest companies in the US; with a market cap bigger than Walmart and Johnson & Johnson.

But these are big ifs.

Tesla stock is risky for a reason. I would urge that you do your due diligence on the company before making any investment decisions.

Have Burning Questions About Tesla and Other Stocks?

Why not check out the SeedlyCommunity stock discussion page and participate in the lively discussion about all things stocks!