The Definitive Singapore Neighbourhood Guide: Is Tiong Bahru Best for You? 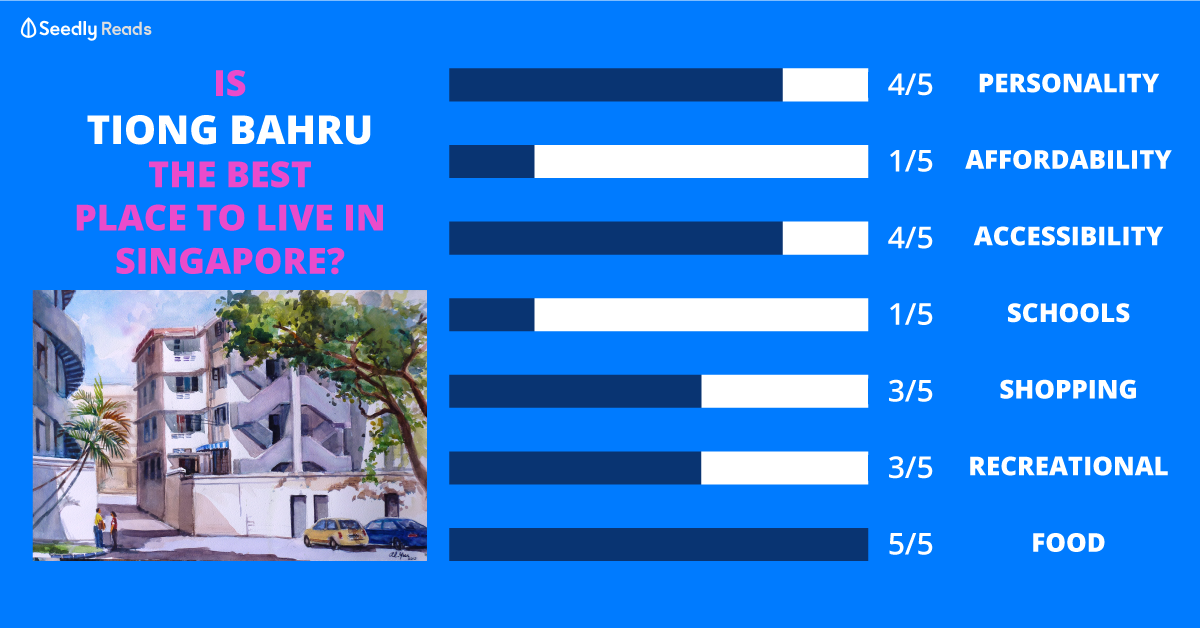 The Definitive Singapore Neighbourhood Guide: Is Tiong Bahru Best for You?

Living in Singapore, we all have our opinion as to where the best neighbourhood in Singapore is.

This age-old debate will go on, but it is not helpful in helping you to find a new place to live.

This is where we will lay out the facts of the neighbourhood to you, and evaluate it in an objective manner as much as possible so you can make the best choice of where to live.

This guide will be good for prospective homeowners, expats looking to settle down in Singapore, people looking for a change of environments and more.

The first two instalments took us to Punggol and Tanjong Pagar.

This week we will be visiting Tiong Bahru or ‘new cemetery’.

TL;DR: The Definitive Guide to the Tiong Bahru Neighbourhood

Our Comparision Methodology to Find the Best Neighbourhood in Singapore

Each area will be evaluated based on a list of 7 criteria where no one criteria will have a higher weightage over another.

Each criterion will be given a score from 1 – 5.

The scores will then be collated. The total score given will determine the neighbourhood’s rank.

The neighbourhoods will range from S Rank to D Rank:

Note: as much as I try to be objective in analysing these neighbourhoods and presenting the rationale for them, there will still be some amount of bias. Opinions expressed here are solely my own.

For this guide, the focus will be on the Tiong Bahru neighbourhood as demarcated by the boundaries in red.

The neighbourhood’s name is rather dark as “tiong” means to “in the end” or “die” in Hokkien, while “bahru” means “new” in Malay.

As a result, the locals referred to it as “new cemetery” as Tiong Bahru is beside the Heng San Teng Burial Ground and the Old Chinese Burial Ground, the latter of which is where the current Singapore General Hospital is located.

The housing estates there were built in the 1920s by the Singapore Improvement Trust (Housing Development Board predecessor), a body set up by the British colonial authority to provide mass housing in Singapore.

Personality and Charm of Tiong Bahru (4/5)

As the oldest neighbourhoods in Singapore, Tiong Bahru has plenty of beautiful pre-war architecture flats that have been preserved for conservation in the neighbourhood.

This neighbourhood is also popular with artists, creatives and culture lovers, with its trendy cafes, cool boutiques and an indie bookstore.

His work which harkens back to how life was like in the neighbourhood back in the day add a dash of character to the place.

Undoubtedly, Tiong Bahru is a neighbourhood to be living in for its old school charm, historical and cultural significance and the many cool establishments and pretty street art. 4/5 for the new cemetery!

For this guide, we will be using the median price of HDB resale flats during the fourth quarter of 2019.

We have chosen this statistic as a measure of affordability as the median resale flat price provides a good indicator of the average price of housing in the area.

As a mature housing estate with excellent amenities and good connectivity, houses in Tiong Bahru are not too affordable.

The main estate consists of 30 apartment blocks with over 900 units of two to five rooms located within the Bukit Merah planning area.

We have included data from the most expensive areas and most affordable neighbourhoods.

The median resale flat prices for Tiong Bahru are considered amongst the highest in Singapore and are in the same tier as neighbourhoods like Queenstown and
Tanjong Pagar.

This downgrades their affordability rating to a 1/5.

In terms of transportation, Tiong Bahru’s central location makes it one of the more convenient places in Singapore.

The neighbourhood is well connected to the majority of Singapore’s transport networks by MRT, bus or by car.

Currently, there is Tiong Bahru (EW17) MRT station on the East-West line.

Tiong Bahru MRT station is about 10 minutes away from Raffles Place MRT station (EW14/NS26) which grants easy access to the North-South Line.

Outram Park MRT station( EW16/NE3/TE17) is also one stop away in the other direction and grants access to the North-East Line.

There are many bus services in the area which connect it to the heart of the Central Business District and all around Singapore.

Here is an estimation of how long it will take to get to the main work areas in Singapore from Tiong Bahru by public transport:

Motorists can get around Singapore easily from Tiong Bahru.

They can head onto the Central Expressway (CTE) to access the Ayer Rajah Expressway (AYE) to get to the westernmost side of Singapore.

The CTE also connects motorists to the North.

Here is an estimation of how long it will take to get to the main work areas in Singapore from Tiong Bahru by car accounting for traffic:

In terms of convenience by public transport or car, Tiong Bahru is rather well-connected but not the best in Singapore.

This is also one of the main reasons for its price premium.

I would give Tiong Bahru’s accessibility a 4/5 score because of this.

Schools in the Tiong Bahru Area (1/5)

Unfortunately, there is a lack of Primary schools, Secondary schools and Tertiary Institutions in the Tiong Bahru area

Strictly speaking, only Zhangde Primary School is the only school in the estate.

I had to widen my search to include schools around the neighbourhood via MOE’s SchoolFinder.

However, there are quite a few pre-schools and kindergartens in the Tiong Bahru neighbourhood:

Thus, this area is more ideal for parents with young children.

I am rating the school situation in Tiong Bahru 1/5 due to a shortage of Primary schools, Secondary schools and a lack of tertiary institutions

There are six floors of retail and Food and Beverage (F&B) options with a cinema, Golden Village Tiong Bahru located on the fourth floor.

There are quite a few supermarkets and grocery stores available in and around Tiong Bahru and even a wet market as well.

Hospitals And Clinics in Tiong Bahru With CHAS

Strictly speaking, there are no polyclinics or hospitals in Tiong Bahru.

The nearest polyclinic is SingHealth Outram.

There are also no hospitals in Tiong Bahru, you will have to be sent to Singapore General Hospital (Outram Park) for more serious ailments.

Otherwise, you will be sent to Alexandra Hospital if you prefer a private hospital.

Do remember to check your Integrated Shield Plans to see what kind of coverage you are entitled to.

Now the good part, there are quite a few private clinics in Tiong Bahru.

You’ll be glad to know that these clinics support the new and improved CHAS card which provides subsidies for ALL Singaporeans for chronic conditions, regardless of income.

You’ll be glad to know that there are the Tiong Bahru Post Office and a [email protected] Bahru for all your mailing needs.

In terms of shopping and lifestyle amenities, Tiong Bahru has everything you need but nothing too extraordinary.

You can get close to nature at Tiong Bahru Park, which is just a five minutes walk away from Tiong Bahru MRT.

The park features fitness corners a foot reflexology footpath and a cool children’s playground with a crazy tilting train that young and the young at heart will enjoy.

There is also a calming therapeutic garden, with its various themed botanical landscapes.

You can also download the Tiong Bahru Heritage Trail from Roots.sg if you would like to know more about the history, architecture and culture of the area.

This earns it a 3/5 in my book as although this is a nice place to spend a relaxing weekend, there isn’t enough variety for everyone.

Tiong Bahru has to be considered a good food haven.

Like the neighbourhood, the food here is a melding of the new and old.

The eateries range from the hawker stalls that serve up delicious traditional local food to the modern cafes that are well received by the cafe hoppers in Singapore.

The hawker centre and wet market is home to a good number of acclaimed stalls including:

Tiong Bahru is known for its cafe hopping scene. The neighbourhood has some of Singapore’s best cafes like:

Tiong Bahru restaurants also offer up a rich variety of old and new. They can be largely grouped into traditional food and contemporary joints.

Contemporary joints like Bincho at Hua Bee with its an all in one Yakitori-ya (small shops selling yakitori) concept, BAKALAKI Greek Taverna with its Greek food, Teru Sushi with its fresh oysters and not forgetting gluten-free bistro The Butcher’s Wife.

Tiong Bahru is home to many cool bars.

There is Coq and Balls with its cheeky name and bold drinks, Cozy Wine with its rich selection of wines, Lin Rooftop Bar with its amazing views, Canjob Taproom for its chill ambience and
Lee Tai Fu with its fantastic selection of craft beers and ciders.

With the sheer variety, availability, quality and melding of traditional and modern, Tiong Bahru gets a 5/5 for its food in my books.

The scores are in.

Tiong Bahru scores a good 21 points which land it in the B-Rank category.

There is a reason why the neighbourhood is popular with older Singaporeans, young couples, professionals and families.

If you have any other more specific questions and would like to discuss property, the friendly Seedly Community is here to help!

Do also let us know in the comments what your favourite neighbourhood is!