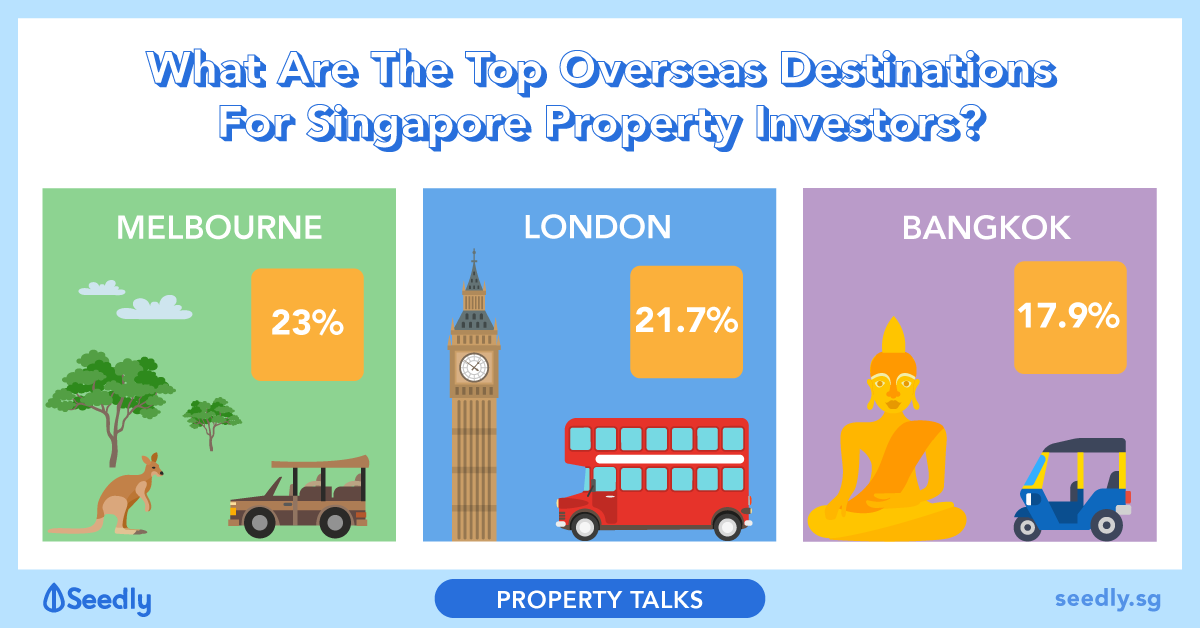 A growing number of property investors in Singapore are turning their attention abroad. Of the 803 respondents to the 2019 EdgeProp-Knight Frank Homebuyers’ Sentiment Survey, 29.4% said they would be keen to invest in overseas residential properties in the next 12 months.

This is compared to the 28.6% of 611 respondents who indicated an interest in overseas properties in 2018’s survey.

The increased interest in overseas properties could be due to the latest round of property cooling measures, which saw higher additional buyer’s stamp duty (ABSD) rates and tighter loan-to-value (LTV) limits from July 2018.

Residential properties located outside of Singapore are excluded from ABSD.

Overseas Properties In Melbourne, London, And Bangkok Most Popular

Based on the 2019 EdgeProp-Knight Frank Homebuyers’ Sentiment Survey, which was conducted in 4Q2018, Melbourne (23%), London (21.7%), and Bangkok (17.9%) are the most popular overseas markets among Singapore property investors (see Chart 1).

This might also be attributed to the change in demographics among the respondents in the recent survey: 86.8% indicated they were Singaporeans, compared to 79.2% in the previous survey.

“Usually, buyers will invest in markets they are familiar with, and those that are close to Singapore,” says Lee Nai Jia, senior director and head of research at Knight Frank. Other important considerations include the growth potential and political stability of these markets.

Australian cities such as Melbourne, Perth and Sydney are popular with Singaporeans as many have studied in those cities, and are familiar with the laws and property market there, says Lee. He adds that prices of residential properties in Melbourne, in particular, have continued to trend upwards, rising by 3% year-on-year in 3Q2018.

“Buyers are also inclined to invest in gateway cities such as London and New York,” he adds.
Lee says buyers are attracted to homes in London as home prices in the UK have declined due to political uncertainty and higher taxes on non-residents. “As at 2Q2018, residential prices have eased 1.8% year-on-year on average,” says Lee.

As for Bangkok, he shares that residential prices there are largely stable, although minor fluctuations have been observed in recent quarters.

Despite the increased interest in overseas properties, the survey findings indicate that local properties are still largely preferred by Singapore investors. A lack of knowledge about overseas markets (65.8%) and confidence in Singapore’s stable economic environment (59.4%) were cited as top reasons for this preference (see Chart 2).

There tend to be an “asymmetry of information” and most buyers will seek overseas properties only if there is a compelling need to – for instance, moving overseas to work, says Lee. In addition, most buyers who invest overseas either know the market well or have a higher appetite for risk, he explains. Further, about 40% said they believe Singapore investments provide better yields. This is reflected in the positive sentiments surrounding property prices (Chart 3) and rentals (Chart 4) in the coming months.

According to Knight Frank’s Lee, Singapore home prices are expected to remain stable in 2019. However, prices of older private properties with shorter leases will face greater downward pressure.

“We also expect vacancy rates and rents to stay stable given that there are fewer units being completed,” he says.

Perhaps owing to the high proportion of investors among the respondents, the results indicated a preference for private condos and apartments, with 66.4% of the respondents selecting that as their preferred property type.

This is followed by HDB flats at 18.8% and executive condos (ECs) at 5.5%, with the remainder split between landed houses, strata-landed properties and penthouses. HDB flats and ECs are subject to a five-year minimum occupation period and rules for resale and rental, which make them less favoured as investment properties.

Location-wise, most respondents preferred the city fringes when buying units with two or more bedrooms. However, those looking to buy one-bedroom units indicated a strong preference for the prime districts.

“Based on the findings, it is likely that buyers seek convenience but are concerned about affordability. Hence, they are willing to compromise on distance to the CBD for more space,” says Lee. “However, the majority of the respondents belong to the middle-upper income group.”

He shares that buyers are also likely to be more “quantum sensitive” than before, with the majority of respondents citing a preference for prices below $1.8 million for three-bedroom units or smaller. Based on the survey findings, about 62% of respondents said they were looking for homes priced below $1.5 million.

Elsewhere, the survey showed there was a strong preference for two- or three-bedroom units. For instance, nearly 16% of the respondents indicated their preference for homes of 701 to 900 sq ft, while about 32% said they favour homes between 901 and 1,300 sq ft.

In addition, the survey findings indicated a clear preference to reside in the prime districts and the city fringes, although it is interesting to note that only a few indicated a preference to live in Outram Park. “This may be due to a lack of new offerings in the area,” says Knight Frank’s Lee. Outside the Central Area, it is observed that there is interest in areas such as Ang Mo Kio, Serangoon, Clementi and Jurong East.

“Interestingly, the demand to live in Punggol and Sengkang does not seem to be significant. This is despite the fact that these areas will likely experience significant growth due to the upcoming Punggol Digital District.

The demand may only come into fruition when the construction is completed,” Lee concludes.