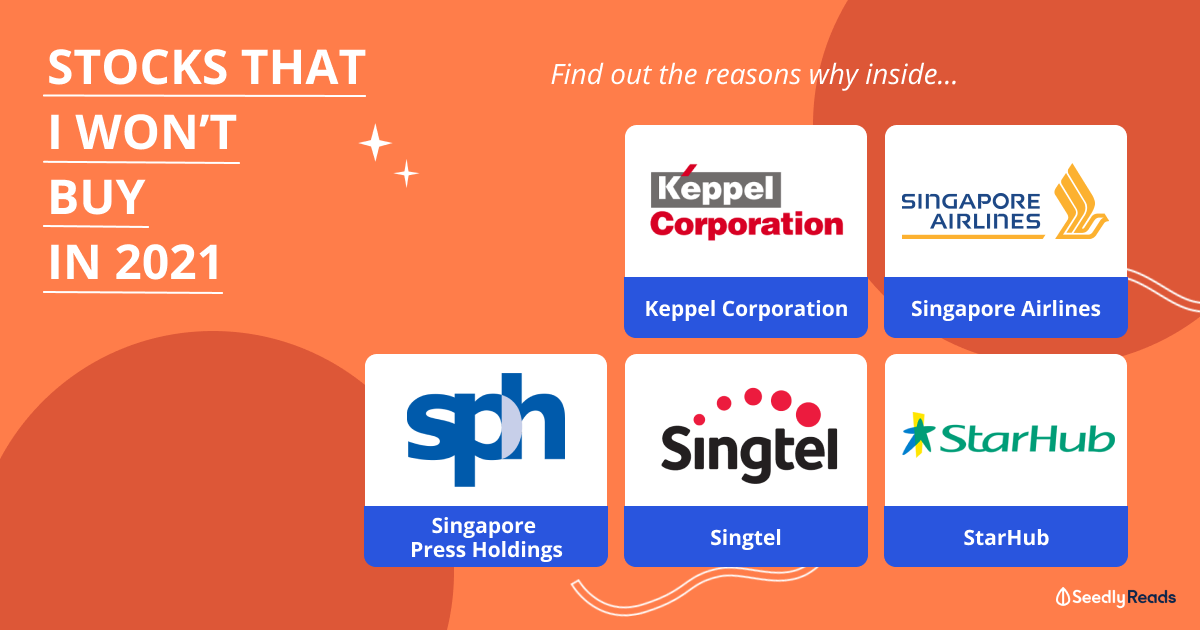 5 Well-Known Singapore Companies I'd Avoid in 2021

We recently featured several Singapore-listed companies to consider buying for the new year.

They were hand-picked from a universe of stocks listed here and in the US as they have certain characteristics that I like.

Flipping that logic around, there are also companies I wouldn’t touch with a ten-foot pole.

With that, let’s explore five Singapore stocks that I would avoid in 2021.

Over the past five years, both revenue and net profit have fallen drastically.

The plunge in oil price back in 2014 has impacted Keppel’s O&M business segment, dragging down the whole group.

To add on to its woes, Keppel doesn’t have a strong balance sheet. I like companies with more cash than debt as it allows them to weather through any tough economic conditions.

Looking ahead, the blue-chip company is planning to transform itself into an integrated business and a powerhouse of solutions for sustainable urbanisation with its Vision 2030.

Even though Vision 2030 may sound promising, I’d rather be watching from the sidelines to see how well the company can execute on its plans and revive the overall business.

Both valuation metrics are unattractive to me considering the risks that I have to take on.

Singapore Airlines (SGX: C6L) just made news for raising US$500 million via its first US dollar-denominated bond issue.

Net proceeds from the issue will be used by SIA for aircraft purchases, aircraft-related payments, and general corporate or working capital purposes, including refinancing of its existing borrowings.

Even though the airline has extra financial lifeline from the bond issue, over the long run, I’m not too fond of SIA as an investment in my stock portfolio.

The company, similar to other airlines, is operating in a price-sensitive industry without much pricing power.

(Who won’t go for the cheapest plane tickets when they can start travelling again?)

SIA also has to constantly use cash to keep its fleet young. The proceeds from the latest bond issue are likely to be channelled for this purpose.

Singapore Press Holdings (SGX: T39) is the publisher of well-known local newspapers such as The Straits Times and The Business Times. The company has three business segments — media, property and others.

SPH’s media business is the main revenue contributor to the company, contributing around 51% of FY2020 revenue.

The downtrend has been continuing for the past couple of years, as seen from the chart below:

With the proliferation of online advertising mainly through Facebook and Google, the media segment has been severely disrupted.

The availability of free news from websites has not helped things either.

SPH is increasing its digitalisation efforts and trying its best to diversify its business by investing in other asset classes.

However, I’m unsure if the initiatives would help to turnaround the overall company. Therefore, I will skip investing in SPH for now.

Being Singapore’s largest telco, it would seem that Singapore Telecommunications Limited (SGX: Z74) has a wide economic moat, but that’s not the case.

Over the past decade, Singtel has been struggling to grow its business as seen from its declining revenue and earnings.

It’s not hard to see why.

With the proliferation of internet-enabled messaging and voice services, such as Viber and WhatsApp, and over-the-top service providers like Netflix, Singtel doesn’t have the stronghold it once had.

Furthermore, competition is heating up with the entry of Singapore’s fourth telco TPG Telecom, which just launched a value-for-money SIM-only plan at S$18 for 80GB worth of data.

Who knows what else TPG and the mobile virtual network operators (MVNOs) such as Circles.Life have up their sleeves.

(MVNOs do not own nor operate any network infrastructure but lease it from the incumbent telcos.)

Singtel and Grab were jointly picked as one of the winners of the digital full banking licences, but it would take some time before the entity becomes a fully-functioning digital bank.

Therefore, I’ll hang up on Singtel shares for now and watch how things unfold.

StarHub’s net profit has fallen from S$372 million to around S$186 million over the last five years.

StarHub was recently awarded the 5G spectrum rights by Singapore’s regulator to build and operate a 5G standalone network together with M1.

That would require StarHub to leverage upwards to fund the capital expenditure (capex) for the newest mobile network.

In my opinion, it’s alright if a company has been growing its earnings over the long-term and is investing more money to propel its business to the next level.

But this is not the case for StarHub.

And with an already-leveraged balance sheet, I’m even more wary.