Singaporean Drivers: 8 Traffic Violations With Fine And Jail Term To Take Note Of 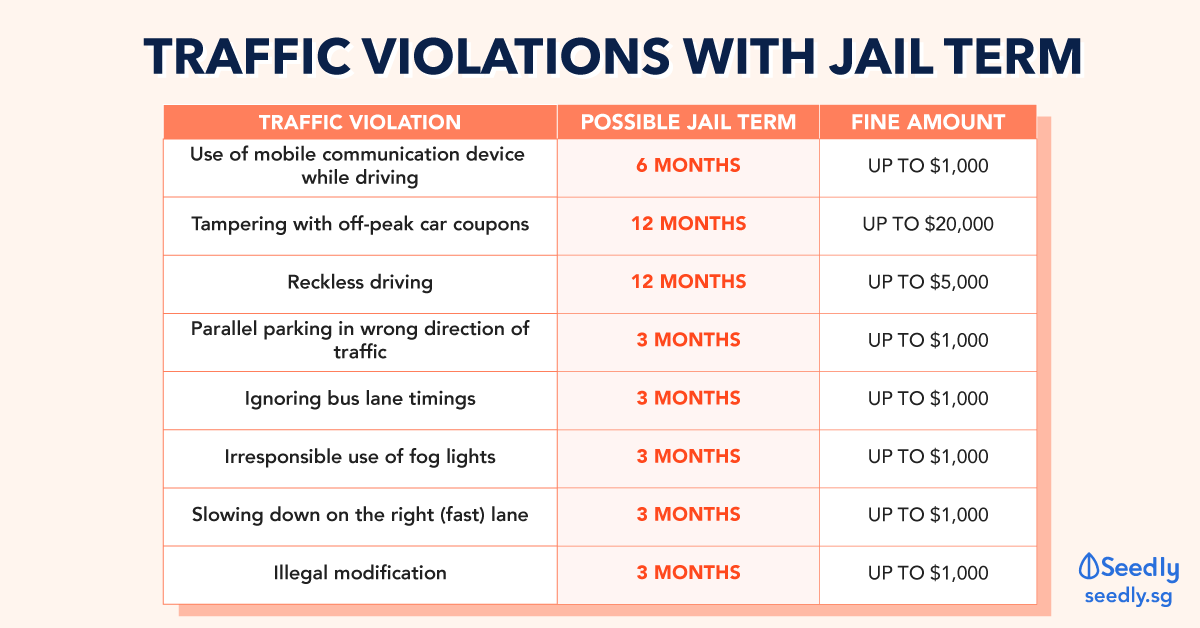 Singaporean Drivers: 8 Traffic Violations With Fine And Jail Term To Take Note Of

Singapore’s regulations and laws are notorious for being one of the harshest in the world.

Foreigners’ first words when asked what they know of Singapore is usually either that we “can’t even chew gum” or have laws that “execute people”.

Our traffic laws are no exception.

Cars in Singapore already cost a bomb, don’t add to that cost!

What are some of the traffic violations that come with jail term in Singapore?

1. Use of mobile communication device while driving

Possible jail term: Up to 6 months or both

The offender will be prosecuted in court and may face a driving disqualification and forfeiture of your mobile phone.

2. Tampering with off-peak-car coupons or not displaying a valid license

Possible jail term: Up to 12 months

Drivers of off-peak-cars (OPCs) are required to utilize off-peak-car coupons while driving and display a valid day license. Failure to do so grants you a fine and/or jail time.

For using an OPC without displaying a valid day licence, an offender can be fined up to $10,000.

About one-third of those convicted were found to have tampered with the licences – a more serious offence.
The punishment is a fine of up to $10,000 for the first offence. Subsequent convictions carry fines of up to $20,000, a maximum jail term of 12 months, or both.

They also face an additional charge of driving without a valid supplementary licence, which carries a maximum fine of $5,000 for first-time offenders.

On average, the tamperers were fined $8,000 – equivalent to almost half their tax savings. Those who drive without a supplementary licence or an invalid one face fines of up to $5,000, which can double for repeat offenders.

3. Reckless driving (in layman terms: “Anyhow cut here cut there, speed up then slow down, tailgating”)

Based on the elaboration by Singapore Legal Advice, these are the 3 factors which generally affect the culpability of a driver for dangerous driving are:

The court has stated that where the harm caused and the driver’s culpability are both low, a fine would usually be sufficient.

However, the court will usually impose a jail term where the harm caused and the driver’s culpability are both high.

4. Parallel parking in the opposite/wrong direction of traffic

While this falls under the category of dangerous driving, the penalties are rather severe.

It’s tempting to “cheat” a bit to get ahead of a congested road, but there are often traffic cameras to monitor bus lanes at major roads, or you might just get a surprise attack but a sneaky office armed with a DSLR waiting to photograph offenders.

6. Irresponsible use of fog lights

Just because it’s there doesn’t mean you can do whatever you want with it. LTA has set certain standards on the use of fog-lights while driving. Turning on your fog-lights may cause a bad glare and distract the driver in front of you, especially in rainy weather.

7. Slowing down on the right(overtaking) lane

While it is not wrong to drive within the speed limit on the overtaking lane, it is an offence to intentionally slow down on the fast lane in order to intimidate or cause danger to other drivers or drive at unreasonably slow speeds.

LTA has a set of guidelines for vehicle modifications to ensure that standards for road safety and vehicle exhaust gas and noise emissions are not compromised, for the benefits of vehicle owners, other road users and our environment. Check against this list if you are thinking of “zenging” your car!

In Singapore, you could get issued a fine from the Housing Development Board(HDB), Traffic Police(TP), Urban Redevelopment Authority (URA),

See other violations that could get you a hefty fine and/or demerit points:

Saw a flash go off in your rear-view mirror? Here’s how to check if you really “kena” fined

In recent years, traffic police fines have shifted from being administered through leaving a slip under your wipers, to digitally notifying you. Besides just posting an official letter to your home address, they also keep an updated record of all fines on their database, which you can access to inquire about your traffic violations.

Say you haven’t received anything from the traffic police but are certain you’ve committed a traffic offence? You can check online by logging in to the Traffic Police’s EDDIES system with your SingPass to view any pending cases that the Traffic Police might currently be investigating.

In the event of more serious traffic offences that warrant a court hearing, you will receive notification of the time of your hearing.

Based on personal experience: how to appeal when you receive parking or traffic fines in Singapore

Except if you’re loaded, or rather not go through the trouble, you should always try to appeal your case. You might be able to get the fine waived if you appeal, especially if in the case of parking fines or less serious traffic infractions.

It is usually quite easy for first-timers to appeal your way out of a parking fine. Just access the website of the relevant government agency (eg. LTA, HDB, URA) and submit your appeal online, explaining why you faced factors that forced you to commit the parking crime, and will not repeat the same mistake again.

Once you have appealed, you will not be required to pay the fine until the outcome of your appeal has been made known.

Paying traffic fines is really not a tedious process.