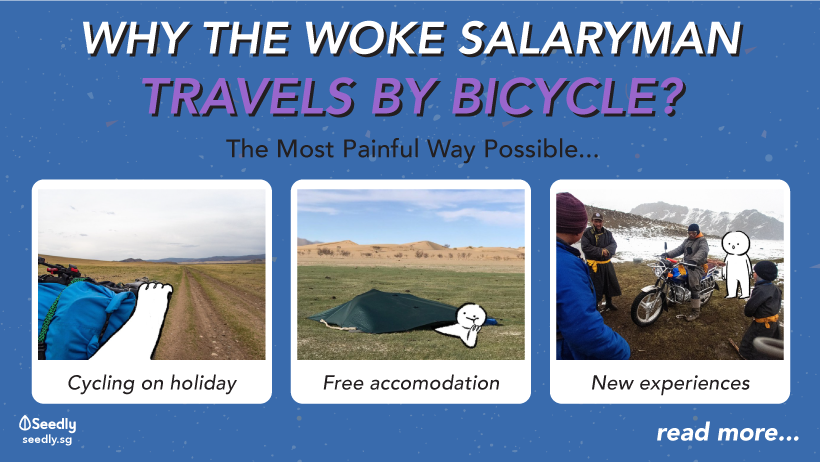 In case you haven’t noticed, achieving financial freedom in your 20s or 30s requires quite a bit of sacrifice. Part of this sacrifice involves taking fewer holidays or staycays.

I’ve got quite a bit of flak in the past – critics say I advocate ambitious financial goals at the cost of wonderful life experiences.

But this couldn’t be further from the truth. Yes, wonderful life experiences are right out there to be had – I just don’t believe in paying big bucks for three nights in Bali and other short holidays.

Which is which I’m a huge advocate of bicycle touring.

For every year since 2016, I’ve tried to take at least three weeks off, fly to somewhere with my bike and start exploring. Yes, I don’t go on a lot of holidays a year, but when I do,  I make it count.

Now, I know this is a strange way to travel and it’s definitely not for everyone, especially  Singaporeans who come from a country without a strong biking culture.

It’s slow. You won’t get to see all the tourist attractions listed on TripAdvisor. And it can be frustrating and exhausting.

But here’s exactly why I do it.

Let’s start with the obvious.

I usually aim to spend between $1,800  – $2,500 on a month-long holiday, including flight tickets. Here are some reasonable estimates, should you want to try it out.

One of the major costs of any holiday is usually defrayed with camping.

I carry a tent/tarp with me.

Of course, on days I’m craving a hot shower and clean sheets, I check into a roadside motel, hostel or hotel.

That said, when I do stop in a major city – say Osaka – there’s nothing stopping me from splurging on an okonomiyaki restaurant.

Bringing your bike on a plane doesn’t cost as much as you might think.

It’s FOC for a lot of airlines, but it does need some careful packing so your bike doesn’t become count as oversized luggage.

Be prepared to buy up to $100USD if that happens.

Still, not too expensive.

This category is minimal because you’re cycling.

That said, don’t rule out the occasional bus or train on days you need to rest.

Forget Disneyland or Ocean Park. Or squeezing with hordes of people in queues. Most of the places I choose to visit are small museums, historical landmarks or nature parks. Admission fees are usually lower for these types of places.

^ Turn this into a road trip with vehicle rental, and the cost will start to skyrocket.

You See More (Of What Matters)

In my humble opinion, my preferred outcome of travel is to learn and expose yourself to new experiences and cultures. (If I wanted to chill out and unwind, I’d just stay at home with a good book to save money)

Before bike touring, I’ve been on holidays that involve rushing from one attraction to another, without spending meaningful time in each place to learn its little quirks.

Which brings us to the paradox: travelling slowly can actually you to see and experience more.

Which brings me to my next point:

If You Accept The Limitations Of A Slower Vehicle And Not In A Rush To Get Anywhere, You Get More Freedom And Flexibility To Explore

I love road trips on a car, but there’s often a reluctance to stop because you’re worried about getting to a fuel stop, breaking the law, inconveniencing the car behind you, or getting onto terrain that a car can’t cross.

A bicycle is immensely slower, no doubt. But when the road ahead has obstacles, you can dismount, carry your bike over the obstacle, and then keep riding. I would even go as far as to say it’s one of the most flexible ways to holiday.

You don’t exactly worry about petrol stations, because it’s powered by you.  How far you go depends on how determined you are to reach your destination.

If you see something cool, you can go off the road for a little bit to do some exploring.

And if you decide you’ve had enough, you can throw your bike into the trunk of a car/bus/lorry/train to get back to civilization.

It’s One Of The Best Ways To Experience Nature

I love Singapore’s efforts to preserve nature and provide greenery. But you can’t walk around in Bukit Timah Nature Reserve for days to escape your boss (or maybe you could, I’ve not tried).

Maybe that’s why I always make it a priority to experience a fair bit of nature on every trip.

I used to hike a lot, but any hiker will tell you, carrying a 15 kg backpack and walking in the forest has its dull moments.

Hiking and trekking still have a special place in my heart, but if you want to cover 100 km in three days, it simply can’t be done on foot carrying 3 litres of water, your tent, sleeping bag, clothes, food, etc.

A bicycle’s metal frame deals with weight a lot better than flesh and bones. I’ve loaded my bike up with 15 kg of stuff and rode it through the Mongolian steppe, covering as much as 70 km a day.

If you’re not in perfect shape and can’t walk for long distances (yet), a bicycle is an extremely useful tool to explore wild and remote areas.

Have you ever went on an eating spree on a holiday, only to come back 3 kgs heavier? Or felt guilty about trying new food because you have got a diet to follow?

With a cycling trip, there’s no such fear.

Well, this is pretty self-explanatory. Air travel is a huge contributor to climate change.

I try to fly no more than twice a year, and I shun holidays where you have to take multiple flights.

How to start: The bicycle + how to carry luggage

Contrary to popular belief, you don’t need a very expensive bicycle to start bike touring. You could even just fly overseas and rent a bike there. I choose to bring my bicycle – an $800 Marin Muirwoods – overseas each time because I’m sentimental like that – cool to have all your miles on one bicycle.

Realistically, any bike not bought from the supermarket can do the job. Decathlon is a good place to start looking for bicycles, and they sell panniers (bags you carry on bicycles).

If you prefer cycling in the wilderness, you might want to opt for a mountain bike with bigger tires and more lightweight set up with bikepacking bags.

(Of course, if you were a true Woke Salaryman you’d just use the bike you already have, instead of going to buy another.)

Where I’d Recommend Doing It

Just off the top of my head, the UK, US, Europe, Japan, Australia, and Taiwan have plenty of these well-established trails and beautiful sights to see. Interestingly, a lot of these countries have pretty pricey accommodation, so by camping at night, you could save quite a bit of money.

If you’re feeling more adventurous, Mongolia‘s pretty decent too. But the level of remoteness requires some advanced outdoor and bike repair skills because you can’t depend on people for help.

In general, anywhere with lots of nature and fewer cars is a nice place to ride.

If you’re starting out, I recommend the Taiwan Cycling Route No. 1, or Japan’s Shimanami Kaido.

I haven’t tried the former, but it’s extremely popular.

I completed the latter as part of longer trip in 2017 where I cycled from Tokyo to Hiroshima.

Where I’d Not Recommend Doing It

If you’re going to any major city in Southeast Asia, I would say skip the bike and take public transport/taxis instead.

Places like Jakarta, Myanmar, Hongkong are terrible for cyclists.

Accommodation in these places is pretty affordable too.

That said, the countrysides in SEA are still a great place to cycle.

I’d be first to admit that bicycle touring isn’t for everyone.

It’s tough, rough and it often requires lots of mental strength to keep going. It’s also incredibly slow. If you have limited time on your holiday, this won’t be the ideal holiday for you.  And those with children might want to do something else altogether.

But for those looking for a holiday that…

You should definitely consider bike touring. At some point.