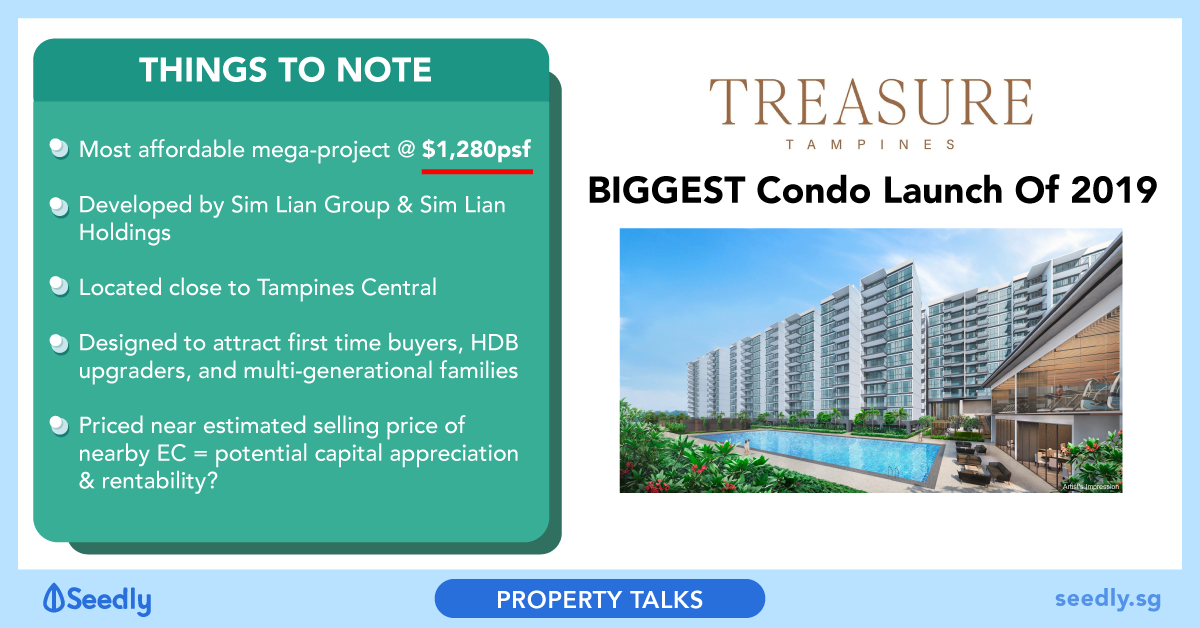 TL;DR: Why Should You Consider Treasure At Tampines?

The 2,203-unit private condo launch will be the largest in Singapore to date. It is:

Friday, March 15 marked the launch of Treasure at Tampines – the largest private condo project to be launched this year. With 2,203 units, it is also the biggest private condo in terms of the number of units – overtaking the 1,715-unit d’Leedon on Farrer Road which previewed in 2010.

“I can’t recall any condo of 2,000 units in Singapore,” says Ong Choon Fah, CEO of Edmund Tie & Co (ET&Co). “It’s certainly a mega-project. By being one of the first to market, the developer wants to capitalise on demand before the others enter the market.”

The 2,203 units at Treasure at Tampines will be spread across 29 twelve-storey blocks. There will be 33 different layouts to choose from. Apartments will range from one- to five-bedroom units with sizes from 463 to 1,722 sq ft. The project sits on a site of about 648,889 sq ft – the equivalent of 11 football fields – and will feature 128 condo facilities, including a 24-hour gym and 13 swimming pools.

The project is jointly developed by Sim Lian Group and Sim Lian Holdings.

One Of The Most Affordable Launches Of 2019

Units released in the first phase will be priced at an average of $1,280 psf. “It’s an attractive price,” says Eugene Lim, key executive officer of ERA Realty Network. “It could well be one of the most affordable launches of 2019.” ERA is jointly marketing the project with OrangeTee & Tie and PropNex.

Nicholas Mak, executive director and head of research and consultancy at ZACD Group, notes that there have been few major project launches – of more than 500 units – in the Simei and Tampines area over the past 2.5 years.

The latest launch in the Tampines area is the 861-unit The Tapestry at Tampines Avenue 10 by City Developments Ltd, and that was in 2018. Based on caveats lodged, 586 units (close to 70%) have already been sold at an average price of about $1,350 psf.

Meanwhile, only 11 units remain available at the 626-unit The Alps Residences by MCC Land, located adjacent to The Tapestry and launched in October 2016. Including the 429-unit The Jovell at Flora Drive, situated just off Upper Changi Road North, the total unsold stock in the neighbourhood of Simei-Tampines-Upper Changi is about 650 units, estimates Mak.

However, Treasure at Tampines is located closest to Tampines Central, where malls such as Tampines Mall, Century Square and Tampines One are situated, as well as the major public transportation nodes, says Alan Cheong, executive director of research & consultancy at Savills Singapore.

Sim Lian Group purchased Tampines Court en bloc for $970 million in August 2017. The collective sale of the former 506-unit, privatised HUDC estate located along Tampines Avenue 11 was the largest in a decade – since the former 638-unit Farrer Court, also a privatised HUDC estate, went for $1.34 billion in June 2007. Farrer Court has since been redeveloped into the 1,715-unit d’Leedon, which was completed in 2014.

Although the price tag of $970 million is hefty, it translates to a land rate of $655 psf per plot ratio (ppr), which, in hindsight, is relatively low. “This means that the developer has the flexibility of pricing the project,” says ET&Co’s Ong.

After all, in January 2019, joint-venture partners Hoi Hup Realty and Sunway Developments paid $434.45 million ($578 psf per plot ratio) for an executive condo (EC) site at Tampines Avenue 10, in the immediate vicinity of The Alps Residences. ZACD’s Mak expects the selling price of the new EC project to be about $1,100 psf, given the land price.

As the starting price of Treasure at Tampines is near the estimated selling price of the future EC project, “the downside risk is limited”, says Alvin Tan, executive director and head of project marketing at PropNex. “Prospective buyers can look forward to potential capital appreciation and rentability of the units upon completion,” he adds.

One of the major attributes of the former Tampines Court is its location within the mature estate of Tampines, according to Kuik Sing Beng, executive director of Sim Lian Group in an email response to EdgeProp Singapore. “By redeveloping this exceptionally well-located piece of land, we are looking to add value to the property sector and homeowners in Tampines,” he adds.

Kuik lists four other key attributes that the site possesses: “Connectivity to major transportation nodes; easy access to amenities and lifestyle conveniences; proximity to reputable schools; and proximity to the Aviation Hub of Singapore, with the opening of Jewel Changi Airport and Terminal 5.”

Treasure at Tampines is near not just one, but four MRT stations – Tampines, Tampines West, Tampines East and Simei – which are each situated within a 10- to 15-minute walk away, says PropNex’s Tan. It is also near major business parks and industrial estates such as Changi Business Park, Pasir Ris Wafer Fab Park and Loyang/Changi Industrial Estate.

Being near Changi Airport is also attractive, especially for those who wish to find tenants who work in the airline industry, adds Savills’ Cheong. “It’s also ideal for frequent business travellers who do not wish to spend too much time travelling to and from the airport.”

Jewel Changi Airpot will see additional 2,000 jobs added to the current 1,800 Changi Airport Group workforce, says Steven Tan, managing director of OrangeTee & Tie. This is on top of its proximity to the Tampines Regional Centre and Changi Business Park, which affirms Treasure at Tampines’ investment potential, he adds.

Sim Lian has designed the units at the new condo to appeal to first-time homebuyers, HDB upgraders, and multi-generational families who want a spacious living room.

ERA’s Lim foresees the pool of potential buyers to include HDB upgraders from among residents living in the HDB estates of Tampines, Simei, Pasir Ris and Bedok.

“In any new launch, we expect the majority of the buyers to be those living within a 5km radius of the project,” says PropNex’s Tan. “But for Treasure at Tampines, we expect a wider coverage of potential buyers from other parts of Singapore, given its attractive price point compared to other new launches in the market, and its location within a mature estate.”

While the property cooling measures introduced in July 2018 may have shaved some demand in the short term, “the lower sales volume creates a stable and sustainable property market”, says Sim Lian’s Kuik.

Homebuyers’ sentiments have not really been affected, argues Savills’ Cheong. Rather, it has just become more cumbersome for many to attain their dream of buying private property, he notes. “The cumbersome process, like needing time to decouple or sell their existing property, has both delayed and constricted the flow of buyers into the private segment of the market.”

ZACD’s Mak is of the view that the government should restore the loan-to-value (LTV) ratio for first-time homebuyers from 75% to 80%. “Reducing the LTV limit to 75% puts HDB upgraders at a disadvantage when buying entry-level private property as they now have to stump up more cash,” he says. “Meanwhile, resale flat prices, especially for older HDB flats, have been rather soft. If they can’t sell their HDB property, they won’t be able to upgrade to private property.”

As part of the renewal of mature HDB estates, en bloc sales for old, privatised HUDC estates are necessary, adds Mak. “All these HUDC estates were built 30 to 40 years ago.”

Owners of other privatised HUDC estates such as Pine Grove, Braddell View and Laguna Park who are still attempting a collective sale will be watching the launch of Treasure at Tampines with interest. “A good take-up rate gives them hope that developers may want to re-look at some of these big, privatised HUDC estates that are trying for en bloc sales,” Mak says.

In the current market environment, “a take-up rate of about 15% – calculated as units sold over total number of units in the development – in the first month of sales is considered very good”, reckons Savills’ Cheong.

Sim Lian’s Kuik is hopeful that Treasure at Tampines will do well, despite the prospect of 50 to 60 new projects vying for buyers’ attention this year.

“New developments that possess competitive prices, attractive project attributes and locations with good accessibility as well as amenities will see good take-up rates,” says Kuik. “We are confident that demand for property – whether for investment or as a home – will be supported by steady economic growth, rising wealth and a healthy employment market in the mid- to long-term.”