UEFA Euro 2020 Final: How Much Will The Winners Get?

UEFA Euro 2020 Final: How Much Will The Winners Get?

Come tomorrow morning at 3am Singapore time, England will take on Italy in the Union of European Football Associations (UEFA) Euro 2020 final at Wembley Stadium in London, England.

On top of winning bragging rights, the winner of the Euro 2020 final will receive up to S$54.6 million (€34 million) in prize money according to UEFA.

This prize money is part of the €371 million (S$595.4 million) prize money pool that will be distributed to the teams participating in the final tournament of Euro 2020.

Unfortunately, you will not be able to legally watch the UEFA Euro 2020 final for free in Singapore.

To catch the final, you will have to subscribe to one of the official Euro 2020 content providers in Singapore. 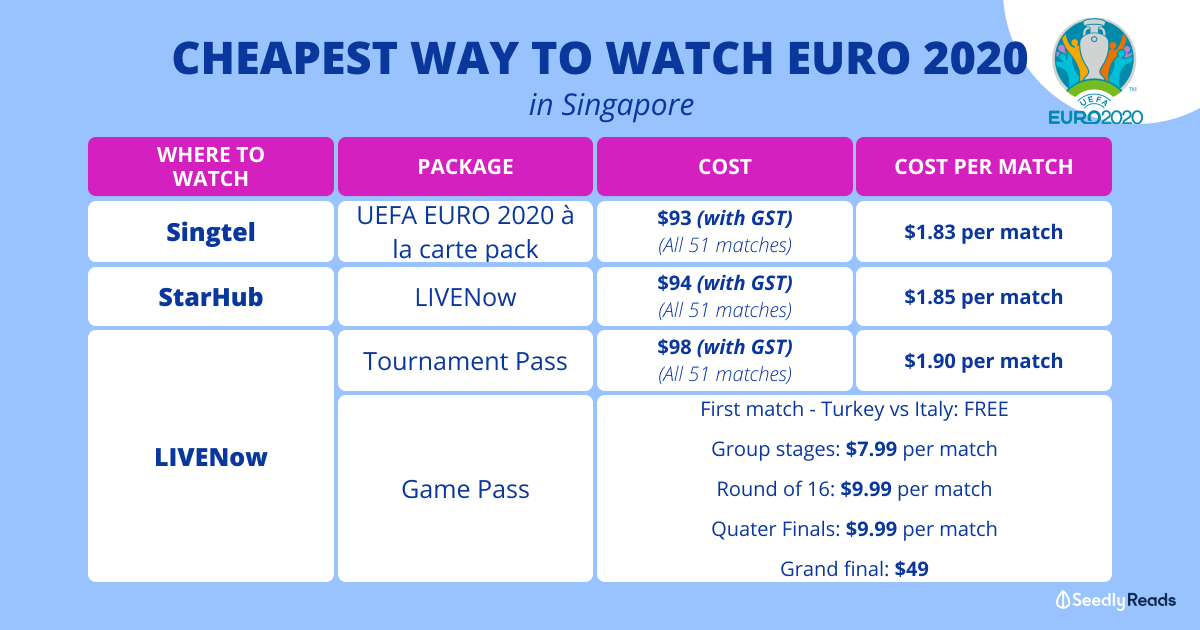 How Much Prize Money Will the Euro 2020 Winners Receive?

Like most other football tournaments, the team that advances the furthest in Euro 2020 will receive the most prize money.

But, both teams would have accumulated a substantial amount on the road to the final.

But to get this amount, the winners of Euro 2020 will have to win all three qualifying group-stage matches and all the knockout games.

Even the participation trophy is quite decent as each team in Euro 2020 will receive about S$14.8 million (€9.3 million) just for qualifying.

When teams progress further in Euro 2020, they will earn substantially more for making it deeper into the tournament.

Here is how England and Italy are faring so far in terms of Euro 2020 prize money.

Since England won two and drew one match in the group stages, they currently qualify for about S$37.3 million in prize money.

If they win the final, they will stand to win about S$16 million more for a total of S$53.3 million.

Whereas for Italy, their team won all three matches in the group stages. This means that they currently qualify for S$38.5 million in prize money.

If they win the final, they will stand to win S$16 million more for a total of S$54.6 million.

England vs Italy Euro 2020: Who Will Win Based on Squad Value

But who will win the final?

The folks over at Transermarkt might have a clue.

Most Valuable Player: Captain and Striker Harry Kane who is worth S$192.6 million (€120 million)

Most Valuable Player: Central Midfielder Nicolò Barella who is worth S$104.3 million (€65 million)

Based on the value of their squads, England look like the favourites.

But football is never that simple.

Anything can happen during the game.

We don’t have to look too far for an example as in the Euro 2020 round of 16, underdogs Switzerland (population of about 8.6 million) managed to beat tournament favourites France.

Although Italy has a lower-valued squad, they have a spine of experienced and proven winners like Juventus defenders Giorgio Chiellini and Leonardo Bonucci.

Whereas England has a younger and hungrier squad with exciting young attacking talents like Raheem Sterling, Mason Mount and Jadon Sancho.

Whatever the case, I am super excited for the Euro 2020 final and will be watching and cheering England on.