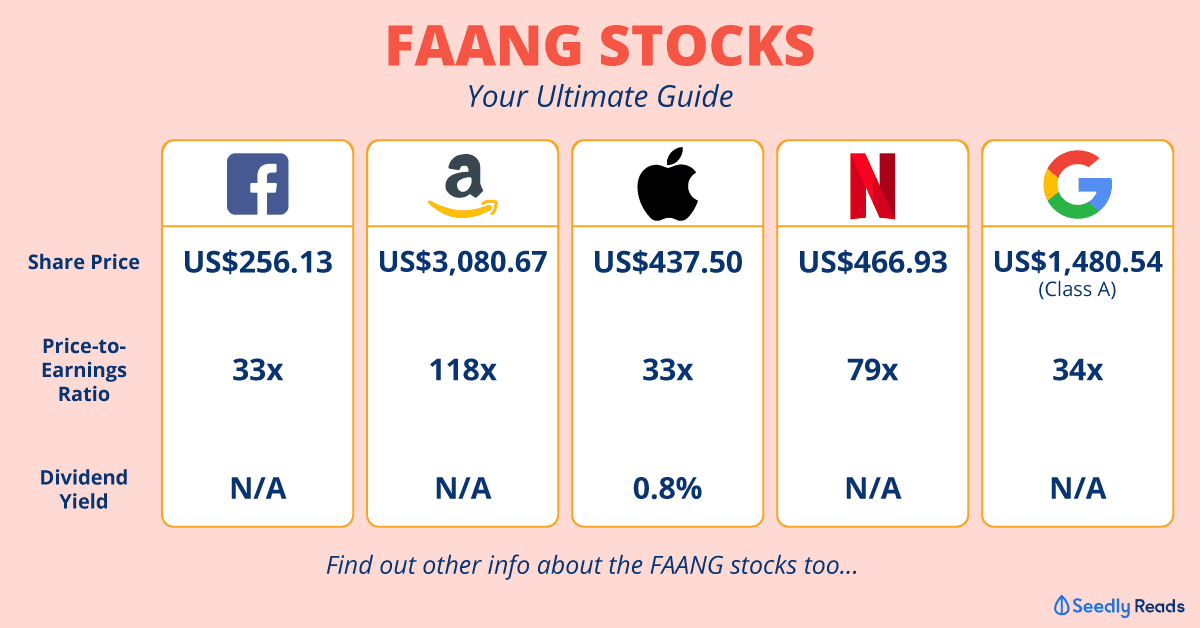 You may have heard about FAANG stocks and how much growth potential they have.

But what exactly are those stocks about?

And how do you invest in them?

Find out from this ultimate guide on FAANG stocks!

What Are FAANG Stocks?

We are not talking about vampires here, obviously.

FAANG is an acronym for five companies that many of us are likely to be familiar with, and we most probably would have used its services before.

Amazon.com is the online retail giant that has revolutionised the way we shop. It is also the brainchild behind Amazon Web Services (AWS), an undisputed leader in the cloud-computing market.

Apple is the tech giant behind the iPhones that many of us carry while Netflix is an online content streamer that we have learnt to have our dinner with.

Last but certainly not the least…

Alphabet owns Google, the only search engine that many go to.

Alphabet also owns many other products that we use regularly, such as Maps, YouTube, Chrome, Android, Google Play Store, Google Drive, and Gmail.

That leads me to the next point, which is the mindshare that these companies have.

The clout of these five companies is far-reaching that their products have become verbs.

You don’t search for something on the Internet, you Google for it.

Even Netflix has its own phrase with its “Netflix and chill” (that’s a story for another day!).

Performance of FAANG Stocks Over the Years

With the strong business case going on for them, it’s not surprising that shares in Facebook, Amazon, Apple, Netflix and Google (Alphabet) have performed well.

In the last five years, the FAANG stocks have outperformed the S&P 500 index, a stock market index that measures the performance of the largest companies in the United States.

Why You Should Consider FAANG Stocks?

The ultimate driver of the businesses behind the FAANG stocks is you and me.

With the proliferation of the Internet, more people will shop on Amazon, Google for stuff, and watch shows on Netflix.

Before the onset of the coronavirus pandemic, research showed that Internet users made up 57% of the global population, and on average, people spend 6 hours and 42 minutes online each day.

This trend has accelerated now due to COVID-19, with people adopting digital technology at a faster rate than predicted previously.

On a longer-term, the Internet user population will only grow as more people, especially those of rural areas, catch up with the broader society.

Many of the FAANG businesses also possess what is called a wide economic moat.

In business, I look for economic castles protected by unbreachable ‘moats.’

The moat acts as a powerful deterrent to those considering encroaching the territory of a business.

By investing in companies that are sticky with consumers, it ensures even more profits are produced by the firms when the consumer goes back for more.

In the case of FAANG stocks, their moats are as follows (non-exhaustive):

Let’s use the world’s biggest social media platform, Facebook, as an example to illustrate its moat.

Facebook has a network effect going on for it as it’s hard to “move” our friends from Facebook to a new social media platform. Even Google+ had trouble upending the social media giant.

Where To Learn More About Those Companies?

Singaporeans who wish to invest in the FAANG stocks should understand more about the companies through their respective investor relations (IR) website.

The IR websites provide detailed information about the company’s business, its financial performance, press releases, presentation decks, and many more.

To get quick data on the past financial performance of the companies and also their latest valuation, you can check out Morningstar, a website I frequent for US stocks.

Risks You Should Note

One of the biggest uncertainty surrounding FAANG stocks is that of regulation.

You would know that Facebook was under intense scrutiny from regulators following the Cambridge Analytica data scandal.

Facebook’s peers are also not spared.

More recently, the leaders of Amazon, Apple, and Google, including Facebook, testified before the US Congress on whether they have become too big and powerful, threatening rivals and consumers as a result.

There’s a debate going on whether the big tech companies should be broken up to reduce their powers.

Whatever the outcome is going to be, investors should understand this risk if they are to invest in the FAANG stocks.

Another risk is that of valuation.

Since the FAANG stocks are widely followed, they generally trade at high valuations.

The following table shows the valuation of the FAANG stocks at their respective stock prices:

For example, Amazon.com has a trailing price-to-earnings (P/E) ratio of around 118, whereas the P/E ratio of the S&P 500 index is around 29. This could mean that Amazon.com is overvalued.

Having said that, it could be worth paying up for FAANG stocks given the wide moat and the huge runway for growth that they have. Investors have to weigh the risks and rewards before investing in such stocks.

Alternatively, instead of investing in the individual FAANG stocks, investors can also choose to invest in exchange-traded funds (ETFs) that have the FAANG stocks as part of them.

Such ETFs allow investors to invest in the FAANG stocks and yet, remain diversified without putting all their eggs in one basket.

How to Buy FAANG Stocks and ETFs as a Singaporean?

Here’s a guide on buying US shares from Singapore and the cheapest brokers you can find.

As a foreign investor, we are not subject to capital gains tax, but we have to be aware of the 30% withholding tax on dividends. 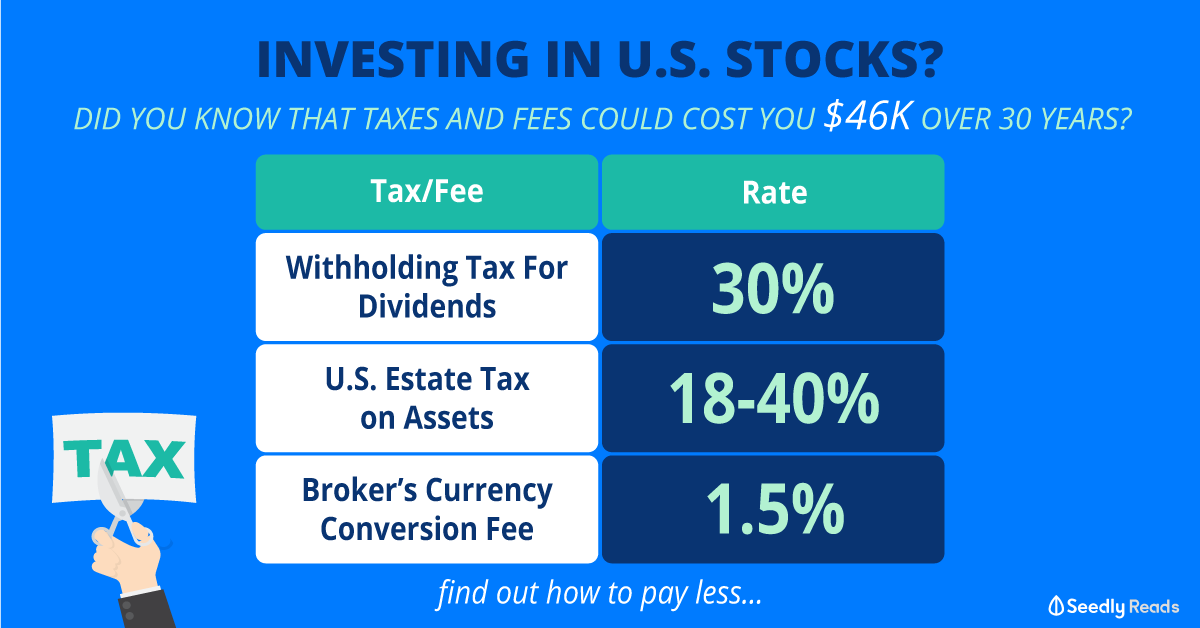 Why not check out SeedlyCommunity and participate in the discussion surrounding the FAANG stocks.